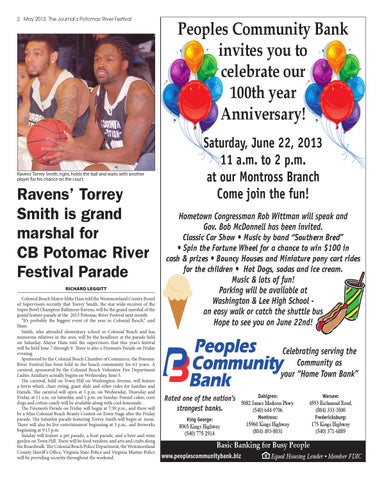 2 May 2013, The Journal’s Potomac River Festival

Ravens’ Torrey Smith, right, holds the ball and waits with another player for his chance on the court.

Ravens’ Torrey Smith is grand marshal for CB Potomac River Festival Parade Richard Leggitt Colonial Beach Mayor Mike Ham told the Westmoreland County Board of Supervisors recently that Torrey Smith, the star wide-receiver of the Super Bowl Champion Baltimore Ravens, will be the grand marshal of the grand feature parade at the 2013 Potomac River Festival next month. “It’s probably the biggest event of the year in Colonial Beach,” said Ham. Smith, who attended elementary school in Colonial Beach and has numerous relatives in the area, will be the headliner at the parade held on Saturday. Mayor Ham told the supervisors that this year’s festival will be held June 7 through 9. There is also a Firemen’s Parade on Friday evening. Sponsored by the Colonial Beach Chamber of Commerce, the Potomac River Festival has been held in the beach community for 61 years. A carnival, sponsored by the Colonial Beach Volunteer Fire Department Ladies Auxiliary actually begins on Wednesday, June 5. The carnival, held on Town Hill on Washington Avenue, will feature a ferris wheel, chair swing, giant slide and other rides for families and friends. The carnival will open at 5 p.m. on Wednesday, Thursday and Friday, at 11 a.m. on Saturday, and 1 p.m. on Sunday. Funnel cakes, corn dogs and cotton candy will be available along with cool lemonade. The Firemen’s Parade on Friday will begin at 7:30 p.m., and there will be a Miss Colonial Beach Beauty Contest on Town Stage after the Friday parade. The Saturday parade featuring Torrey Smith will begin at noon. There will also be live entertainment beginning at 3 p.m., and fireworks beginning at 9:15 p.m. Sunday will feature a pet parade, a boat parade, and a beer and wine garden on Town Hill. There will be food vendors, and arts and crafts along the Boardwalk. The Colonial Beach Police Department, the Westmoreland County Sheriff ’s Office, Virginia State Police and Virginia Marine Police will be providing security throughout the weekend.