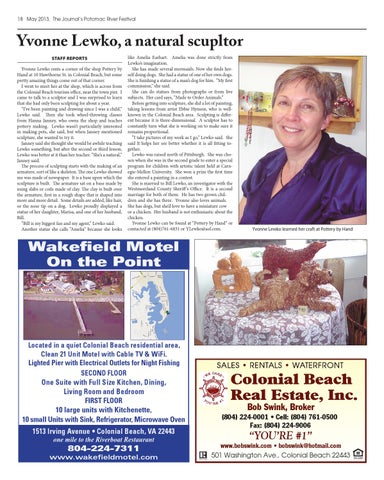 Yvonne Lewko rents a corner of the shop Pottery by Hand at 10 Hawthorne St. in Colonial Beach, but some pretty amazing things come out of that corner. I went to meet her at the shop, which is across from the Colonial Beach tourism office, near the town pier. I came to talk to a sculptor and I was surprised to learn that she had only been sculpting for about a year. “I’ve been painting and drawing since I was a child,” Lewko said. Then she took wheel-throwing classes from Hanna Janney, who owns the shop and teaches pottery making. Lewko wasn’t particularly interested in making pots, she said, but when Janney mentioned sculpture, she wanted to try it. Janney said she thought she would be awhile teaching Lewko something, but after the second or third lesson, Lewko was better at it than her teacher. “She’s a natural,” Janney said. The process of sculpting starts with the making of an armature, sort of like a skeleton. The one Lewko showed me was made of newspaper. It is a base upon which the sculpture is built. The armature sat on a base made by using slabs or coils made of clay. The clay is built over the armature, first in a rough shape that is shaped into more and more detail. Some details are added, like hair, or the nose tip on a dog. Lewko proudly displayed a statue of her daughter, Marisa, and one of her husband, Bill. “Bill is my biggest fan and my agent,” Lewko said. Another statue she calls “Amelia” because she looks

like Amelia Earhart. Amelia was done strictly from Lewko’s imagination. She has made several mermaids. Now she finds herself doing dogs. She had a statue of one of her own dogs. She is finishing a statue of a man’s dog for him. “My first commission,” she said. She can do statues from photographs or from live subjects. Her card says, “Made to Order Animals.” Before getting into sculpture, she did a lot of painting, taking lessons from artist Ebbie Hynson, who is wellknown in the Colonial Beach area. Sculpting is different because it is three-dimensional. A sculptor has to constantly turn what she is working on to make sure it remains proportional. “I take pictures of my work as I go,” Lewko said. She said It helps her see better whether it is all fitting together. Lewko was raised north of Pittsburgh. She was chosen when she was in the second grade to enter a special program for children with artistic talent held at Carnegie-Mellon University. She won a prize the first time she entered a painting in a contest. She is married to Bill Lewko, an investigator with the Westmoreland County Sheriff ’s Office. It is a second marriage for both of them. He has two grown children and she has three. Yvonne also loves animals. She has dogs, but she’d love to have a miniature cow or a chicken. Her husband is not enthusiastic about the chicken. Yvonne Lewko can be found at “Pottery by Hand” or contacted at (804)761-6831 or YLewko@aol.com.

Yvonne Lewko learned her craft at Pottery by Hand

Wakefield Motel On the Point