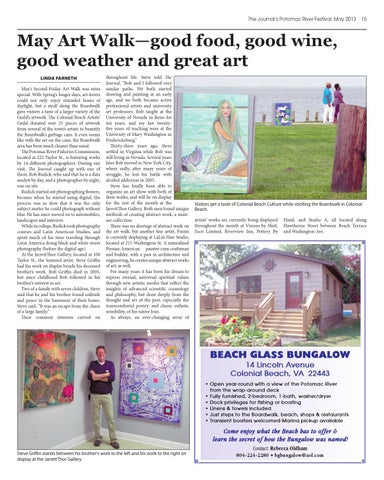 The Journal’s Potomac River Festival, May 2013

May Art Walk—good food, good wine, good weather and great art Linda Farneth May’s Second-Friday Art Walk was extra special. With Spring’s longer days, art-lovers could not only enjoy extended hours of daylight, but a stroll along the Boardwalk gave visitors a taste of a larger variety of the Guild’s artwork. The Colonial Beach Artists’ Guild donated over 25 pieces of artwork from several of the town’s artists to beautify the Boardwalk’s garbage cans. It even seems like with the art on the cans, the Boardwalk area has been much cleaner than usual. The Potomac River Fisheries Commission, located at 222 Taylor St., is featuring works by 14 different photographers. During our visit, The Journal caught up with one of them. Rob Rudick, who said that he is a data analyst by day, and a photographer by night, was on site. Rudick started out photographing flowers, because when he started using digital, the process was so slow that it was the only subject matter he could photograph without blur. He has since moved on to automobiles, landscapes and interiors. While in college, Rudick took photography courses and Latin American Studies, and spent much of his time traveling through Latin America doing black and white street photography (before the digital age). At the JarrettThor Gallery, located at 100 Taylor St., the featured artist, Steve Griffin had his work on display beside his deceased brother’s work. Bob Griffin died in 2005, but since childhood Bob followed in his brother’s interest in art. Two of a family with seven children, Steve said that he and his brother found solitude and peace in the basement of their home. Steve said, “It was an escape from the chaos of a large family.” Their common interests carried on

throughout life. Steve told The Journal, “Bob and I followed very similar paths. We both started drawing and painting at an early age, and we both became active professional artists and university art professors. Bob taught at the University of Nevada in Reno for ten years, and my last twentyfive years of teaching were at the University of Mary Washington in Fredericksburg.” Thirty-three years ago, Steve settled in Virginia while Bob was still living in Nevada. Several years later Bob moved to New York City, where sadly, after many years of struggle, he lost his battle with alcohol addiction in 2005. Steve has finally been able to organize an art show with both of their works, and will be on display for the rest of the month at the JarrettThor Gallery. Both men found unique methods of creating abstract work, a mustsee collection. There was no shortage of abstract work on the art walk, but another fine artist, Farzin is currently displaying at LaLa’s Hair Studio, located at 215 Washington St. A naturalized Persian-American painter-cum-craftsman and builder, with a past in architecture and engineering, he creates unique abstract works of art, as well. For many years it has been his dream to express eternal, universal spiritual values through new artistic modes that reflect the insights of advanced scientific cosmology and philosophy, but draw deeply from the thought and art of the past, especially the transcendental poetry, and classic esthetic sensibility, of his native Iran. As always, an ever-changing array of

Visitors get a taste of Colonial Beach Culture while strolling the Boardwalk in Colonial Beach. artists’ works are currently being displayed throughout the month at Visions by Shirl, Esco Limited, Riverview Inn, Pottery By

Hand, and Studio A, all located along Hawthorne Street between Beach Terrace and Washington Ave.

Steve Griffin stands between his brother’s work to the left and his work to the right on display at the JarrettThor Gallery.