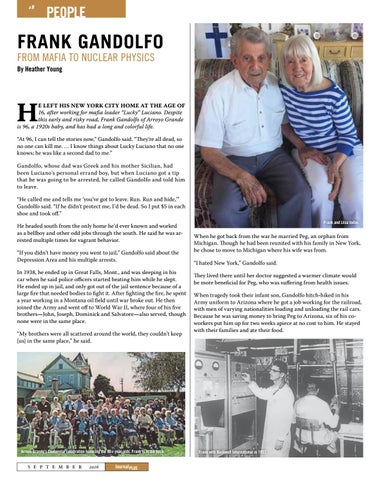 frank gandolfo from mafia to nuclear physics By Heather Young

e left his new York City home at the age of 16, after working for mafia leader “Lucky” Luciano. Despite this early and risky road, Frank Gandolfo of Arroyo Grande is 96, a 1920s baby, and has had a long and colorful life.

“At 96, I can tell the stories now,” Gandolfo said. “They’re all dead, so no one can kill me. … I know things about Lucky Luciano that no one knows; he was like a second dad to me.” Gandolfo, whose dad was Greek and his mother Sicilian, had been Luciano’s personal errand boy, but when Luciano got a tip that he was going to be arrested, he called Gandolfo and told him to leave. “He called me and tells me ‘you’ve got to leave. Run. Run and hide,’” Gandolfo said. “If he didn’t protect me, I’d be dead. So I put $5 in each shoe and took off.” He headed south from the only home he’d ever known and worked as a bellboy and other odd jobs through the south. He said he was arrested multiple times for vagrant behavior. “If you didn’t have money you went to jail,” Gandolfo said about the Depression Area and his multiple arrests. In 1938, he ended up in Great Falls, Mont., and was sleeping in his car when he said police officers started beating him while he slept. He ended up in jail, and only got out of the jail sentence because of a large fire that needed bodies to fight it. After fighting the fire, he spent a year working in a Montana oil field until war broke out. He then joined the Army and went off to World War II, where four of his five brothers—John, Joseph, Dominick and Salvatore—also served, though none were in the same place. “My brothers were all scattered around the world, they couldn’t keep [us] in the same place,” he said.

When he got back from the war he married Peg, an orphan from Michigan. Though he had been reunited with his family in New York, he chose to move to Michigan where his wife was from. “I hated New York,” Gandolfo said. They lived there until her doctor suggested a warmer climate would be more beneficial for Peg, who was suffering from health issues. When tragedy took their infant son, Gandolfo hitch-hiked in his Army uniform to Arizona where he got a job working for the railroad, with men of varying nationalities loading and unloading the rail cars. Because he was saving money to bring Peg to Arizona, six of his coworkers put him up for two weeks apiece at no cost to him. He stayed with their families and ate their food.

Frank with Rockwell International in 1957.