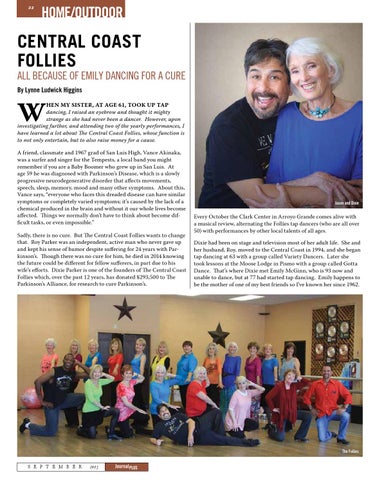 hen my sister, at age 61, took up tap dancing, I raised an eyebrow and thought it mighty strange as she had never been a dancer. However, upon investigating further, and attending two of the yearly performances, I have learned a lot about The Central Coast Follies, whose function is to not only entertain, but to also raise money for a cause. A friend, classmate and 1967 grad of San Luis High, Vance Akinaka, was a surfer and singer for the Tempests, a local band you might remember if you are a Baby Boomer who grew up in San Luis. At age 59 he was diagnosed with Parkinson’s Disease, which is a slowly progressive neurodegenerative disorder that affects movements, speech, sleep, memory, mood and many other symptoms. About this, Vance says, “everyone who faces this dreaded disease can have similar symptoms or completely varied symptoms; it’s caused by the lack of a chemical produced in the brain and without it our whole lives become affected. Things we normally don’t have to think about become difficult tasks, or even impossible.” Sadly, there is no cure. But The Central Coast Follies wants to change that. Roy Parker was an independent, active man who never gave up and kept his sense of humor despite suffering for 24 years with Parkinson’s. Though there was no cure for him, he died in 2014 knowing the future could be different for fellow sufferers, in part due to his wife’s efforts. Dixie Parker is one of the founders of The Central Coast Follies which, over the past 12 years, has donated $293,500 to The Parkinson’s Alliance, for research to cure Parkinson’s.

Every October the Clark Center in Arroyo Grande comes alive with a musical review, alternating the Follies tap dancers (who are all over 50) with performances by other local talents of all ages. Dixie had been on stage and television most of her adult life. She and her husband, Roy, moved to the Central Coast in 1994, and she began tap dancing at 63 with a group called Variety Dancers. Later she took lessons at the Moose Lodge in Pismo with a group called Gotta Dance. That’s where Dixie met Emily McGinn, who is 93 now and unable to dance, but at 77 had started tap dancing. Emily happens to be the mother of one of my best friends so I’ve known her since 1962.