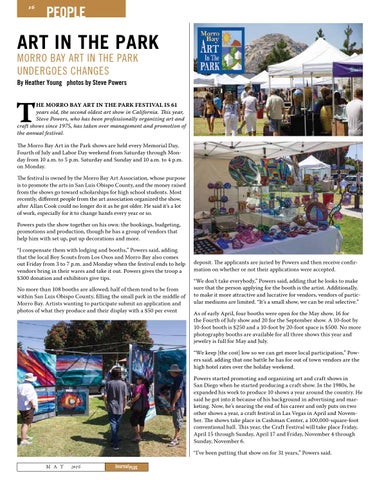 he Morro Bay Art in the Park festival is 61 years old, the second oldest art show in California. This year, Steve Powers, who has been professionally organizing art and craft shows since 1975, has taken over management and promotion of the annual festival. The Morro Bay Art in the Park shows are held every Memorial Day, Fourth of July and Labor Day weekend from Saturday through Monday from 10 a.m. to 5 p.m. Saturday and Sunday and 10 a.m. to 4 p.m. on Monday. The festival is owned by the Morro Bay Art Association, whose purpose is to promote the arts in San Luis Obispo County, and the money raised from the shows go toward scholarships for high school students. Most recently, different people from the art association organized the show, after Allan Cook could no longer do it as he got older. He said it’s a lot of work, especially for it to change hands every year or so. Powers puts the show together on his own: the bookings, budgeting, promotions and production, though he has a group of vendors that help him with set up, put up decorations and more. “I compensate them with lodging and booths,” Powers said, adding that the local Boy Scouts from Los Osos and Morro Bay also comes out Friday from 3 to 7 p.m. and Monday when the festival ends to help vendors bring in their wares and take it out. Powers gives the troop a $300 donation and exhibitors give tips. No more than 108 booths are allowed; half of them tend to be from within San Luis Obispo County, filling the small park in the middle of Morro Bay. Artists wanting to participate submit an application and photos of what they produce and their display with a $50 per event

deposit. The applicants are juried by Powers and then receive confirmation on whether or not their applications were accepted. “We don’t take everybody,” Powers said, adding that he looks to make sure that the person applying for the booth is the artist. Additionally, to make it more attractive and lucrative for vendors, vendors of particular mediums are limited. “It’s a small show, we can be real selective.” As of early April, four booths were open for the May show, 16 for the Fourth of July show and 20 for the September show. A 10-foot by 10-foot booth is $250 and a 10-foot by 20-foot space is $500. No more photography booths are available for all three shows this year and jewelry is full for May and July. “We keep [the cost] low so we can get more local participation,” Powers said, adding that one battle he has for out of town vendors are the high hotel rates over the holiday weekend. Powers started promoting and organizing art and craft shows in San Diego when he started producing a craft show. In the 1980s, he expanded his work to produce 10 shows a year around the country. He said he got into it because of his background in advertising and marketing. Now, he’s nearing the end of his career and only puts on two other shows a year, a craft festival in Las Vegas in April and November. The shows take place in Cashman Center, a 100,000-square-foot conventional hall. This year, the Craft Festival will take place Friday, April 15 through Sunday, April 17 and Friday, November 4 through Sunday, November 6. “I’ve been putting that show on for 31 years,” Powers said.