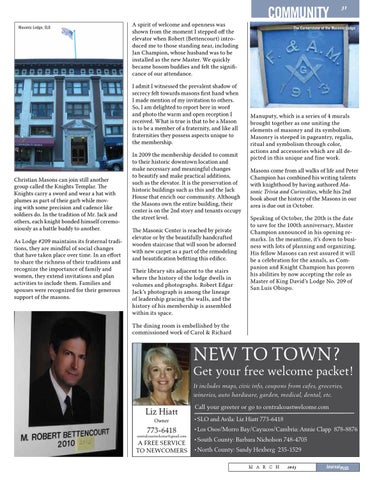 A spirit of welcome and openness was shown from the moment I stepped off the elevator when Robert (Bettencourt) introduced me to those standing near, including Jan Champion, whose husband was to be installed as the new Master. We quickly became bosom buddies and felt the significance of our attendance. I admit I witnessed the prevalent shadow of secrecy felt towards masons first hand when I made mention of my invitation to others. So, I am delighted to report here in word and photo the warm and open reception I received. What is true is that to be a Mason is to be a member of a fraternity, and like all fraternities they possess aspects unique to the membership.

Christian Masons can join still another group called the Knights Templar. The Knights carry a sword and wear a hat with plumes as part of their garb while moving with some precision and cadence like soldiers do. In the tradition of Mr. Jack and others, each knight bonded himself ceremoniously as a battle buddy to another. As Lodge #209 maintains its fraternal traditions, they are mindful of social changes that have taken place over time. In an effort to share the richness of their traditions and recognize the importance of family and women, they extend invitations and plan activities to include them. Families and spouses were recognized for their generous support of the masons.

In 2009 the membership decided to commit to their historic downtown location and make necessary and meaningful changes to beautify and make practical additions, such as the elevator. It is the preservation of historic buildings such as this and the Jack House that enrich our community. Although the Masons own the entire building, their center is on the 2nd story and tenants occupy the street level. The Masonic Center is reached by private elevator or by the beautifully handcrafted wooden staircase that will soon be adorned with new carpet as a part of the remodeling and beautification befitting this edifice. Their library sits adjacent to the stairs where the history of the lodge dwells in volumes and photographs. Robert Edgar Jack’s photograph is among the lineage of leadership gracing the walls, and the history of his membership is assembled within its space.

The Cornerstone at the Masonic Lodge

Manuputy, which is a series of 4 murals brought together as one uniting the elements of masonry and its symbolism. Masonry is steeped in pageantry, regalia, ritual and symbolism through color, actions and accessories which are all depicted in this unique and fine work. Masons come from all walks of life and Peter Champion has combined his writing talents with knighthood by having authored Masonic Trivia and Curiosities, while his 2nd book about the history of the Masons in our area is due out in October. Speaking of October, the 20th is the date to save for the 100th anniversary, Master Champion announced in his opening remarks. In the meantime, it’s down to business with lots of planning and organizing. His fellow Masons can rest assured it will be a celebration for the annals, as Companion and Knight Champion has proven his abilities by now accepting the role as Master of King David’s Lodge No. 209 of San Luis Obispo.

The dining room is embellished by the commissioned work of Carol &amp; Richard

Call your greeter or go to centralcoastwelcome.com

A FREE SERVICE TO NEWCOMERS