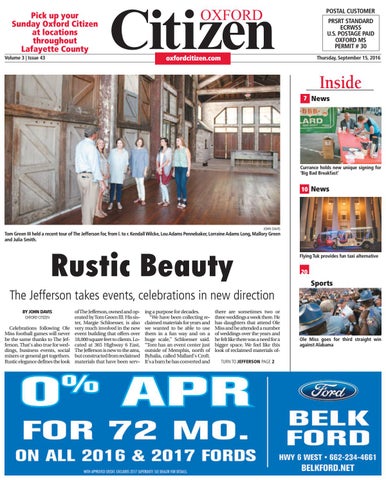 Pick up your Sunday Oxford Citizen at locations throughout Lafayette County

Celebrations following Ole Miss football games will never be the same thanks to The Jefferson. That's also true for weddings, business events, social mixers or general get togethers. Rustic elegance defines the look

of The Jefferson, owned and operated by Tom Green III. His sister, Margie Schloesser, is also very much involved in the new event building that offers over 18,000 square feet to clients. Located at 365 Highway 6 East, The Jefferson is new to the area, but constructed from reclaimed materials that have been serv-

ing a purpose for decades. “We have been collecting reclaimed materials for years and we wanted to be able to use them in a fun way and on a huge scale,” Schloesser said. “Tom has an event center just outside of Memphis, north of Byhalia, called Mallard's Croft. It's a barn he has converted and

there are sometimes two or three weddings a week there. He has daughters that attend Ole Miss and he attended a number of weddings over the years and he felt like there was a need for a bigger space. We feel like this look of reclaimed materials ofTURN TO JEFFERSON PAGE 2