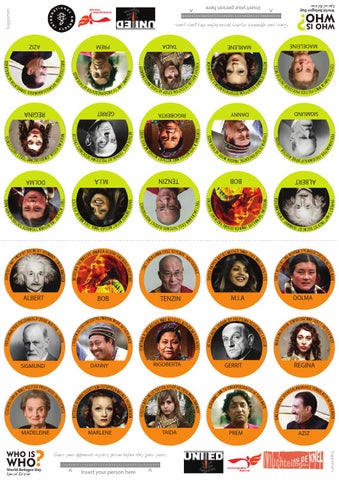 Guess your opponents mystery person before they guess yours. tates ed s

AN RL HE ILE UK

ALBERT IS JEW A.

AN D RL HE

Guess your opponents mystery person before they guess yours. Special Edition

THE MAJORITY OF REFUGEES AND IDPS ARE IN ASIA AND AFRICA, WHICH BETWEEN THEM HOST A TOTAL OF 9.2 MILLION REFUGEES AND 18.1 MILLION IDPS

TANZANIA HOSTS ONE REFUGEE FOR EVERY 76 TANZANIAN PEOPLE (1:76)

IN A REFUGEE CAMP IN SUDAN LIKE KAKUMA ON AVERAGE A PERSON GETS 5L OF WATER A DAY.

OUT OF THE 10,000 BHUTANESE REFUGEES THE NETHERLANDS TOOK 33 LAST YEAR

THE GENERAL PARDON THAT WAS PASSED IN 2001 GAVE 26,000 ASYLUM SEEKERS THE RIGHT TO STAY IN THE NETHERLANDS

THE COUNCIL FOR REFUGEES WORKS TO PROVIDE SUCH PROTECTION, BOTH NATIONALLY AND INTERNATIONALLY.

FINDING A JOB AS A REFUGEES VERY DIFFICULT. NEARLY 40% OF AFGHANIS, IRAQIS, AND SOMALIS WERE UNEMPLOYED IN 2003

IN 2003, 27% OF THE REFUGEES WITH WORK WERE IN TEMPORARY EMPLOYMENT. FOR A NATIVE DUTCH PERSON, THIS FIGURE IS 20% LOWER. REFUGEES ARE MORE LIKELY TO BE CONFRONTED WITH LOW WAGES AND POVERTY MOST EARN ONLY 10 PER CENT OF INDIGENOUS DUTCH HOUSEHOLDS, EUR 850 OLESS.

DUTCH DETENTION PRACTICES HAVE BEEN AMONG THE MOST CONTROVERSIAL IN EUROPE.BECAUSE OF USING BOATS AS DETENTION SITES

IN THE NETHERLANDS THE DURATION OF THE DETENTION HAS A MAXIMUM OF SIX MONTHS, BUT THIS CAN BE EXTENDED TO 18 MONTHS

IN 2009, AN ESTIMATED 377,200 ASYLUM APPLICATIONS WERE RECORDED IN THE 44 EUROPEAN AND NON-EUROPEAN COUNTRIES

REFUGEES ARE SURVIVORS. THEIR COURAGE, INGENUITY AND CREATIVITY ARE QUALITIES WHICH WE VALUE IN THE NETHERLANDS

THERE ARE AN ESTIMATED 14.2 MILLION REFUGEES IN THE WORLD, ROUGHLY 0.21% OF THE WORLD’S POPULATION

AS OF 2010 THE MINISTRY OF JUSTICE OFFICIALLY MAINTAINED SIX IMMIGRATION DETENTION CENTRES WITH A TOTAL CAPACITY OF 2,757

AS A REGION, EUROPE RECEIVED 75 PERCENT OF ALL ASYLUM APPLICATIONS ALTHOUGH THE UNITED STATES REMAINED THE SINGLE LARGEST RECIPIENT COUNTRY

World Refugee Day AT THE DUTCH COUNCIL FOR REFUGEES ALMOST 9,000 VOLUNTEERS WORK VERY HARD FOR REFUGEES, ON A DAILY BASIS AN ASYLUM SEEKER IS A PERSON WHO IS SEEKING TO BE RECOGNIZED AS A REFUGEE, BUT IS NOT OFFICIAL YET AN ESTIMATED 200 MILLION PEOPLE LIVE OUTSIDE THE COUNTRY IN WHICH THEY WERE BORN – ABOUT 3% OF THE GLOBAL POPULATION OF 6.5 BILLION EACH YEAR SOME 20,000 IRREGULAR MIGRANTS AND ASYLUM-SEEKERS ARE DETAINED IN THE NETHERLANDS

5. Once the mystery person is guessed read out their biography out loud to your opponent.

4. During the game you flip down faces that don&#39;t match your opponents answers until you only have one face left.

1.To start take a board of faces and flip up the faces so they are standing.

2. Next each player must draw a face card out of the deck. 3. After this the 2 players take it in turns to ask yes or no questions. If your opponent answers with a yes you may ask another question. If they answer with no it is their turn to ask you.

The aim of the game is guess your opponents mystery person before they guess yours.

E = MC2 Einstein as a Jew was forced to flee when he was charged of treason against the Third Reich in Germany when the Nazis came to power. He sought fled to America, where he used his influence and wealth to obtain visas for others. SIGMUND FREUD Psychiatrist and forefather of psychoanalysis. One year he was receiving Germany’s highest honour the Gothe Prize and the next his books were being burned. Freud had lived in Vienna for 79 years and was 84 years old when he was forced to flee to London. He paid a substantial bribe to leave his own home. GERRIT Gerrit Jan van Heuven Goedhart was a Dutch politician and diplomat, Nobel prize recipient. He was the first United Nations High Commissioner for Refugees. He studied law and was a journalist. As the editor of De Telegraaf he was fired after insulting Adolf Hitler upon his election. During WW2 he was the editor in chief of the resistance newspaper Het Parool In 1944 he fled to London and was the minister of justice in exile.

BOB MARLEY Musician and Rastafarian. In 1976 a gunman, shot Marley, his wife and his manager in a politically motivated attack. Despite this Marley performed two nights later for the Jamaican Prime minister at “Smile Jamaica” with a bullet lodged in his arm. When asked why he performed, he replied:

&quot;The people who are trying to make this world worse aren’t taking a day off. How can I?” DANNY Is a regular guy, he arrived in the Netherlands after Escaping the war in Ethiopia 13 years ago. Like 23,000 others he was recently pardoned by the government to stay here in Holland. He spent many years just waiting to find out his future. Today he is working with other refugees in his community as part of the furniture recycling scheme. He has a wife and two children. RIGOBERTA MENCHÚ

Is an indigenous Guatemalan, of the K&#39;iche&#39; Maya ethnic group. Menchú has dedicated her life to publicizing the plight of Guatemala&#39;s indigenous peoples during and after the 36-year Guatemalan Civil War. Her biography written at age 23. I, Rigobera Menchu won her the Nobel Peace Prize for Literature.

MADELEINE Madeleine Albright was the United States&#39; first female Secretary of State and the highest-ranking woman in the history of the US government.She was born Marie Jana Korbelova. Her family had to flee Czechoslovakia during both the WW2 and the Communist takeover. They immigrated to the United States in 1948. Albright&#39;s grandparents on both sides, died in concentration camps during WW2.

AZIZ Arrived in the Netherlands with a higher education and can speak in eight different languages.

REGINA SPEKTOR Is a Russian-born American singersongwriter and pianist. The family left the Soviet Union in 1989, when Regina was 9, during the period of Perestroika, when Jewish/Soviet citizens were permitted to emigrate. Spektor is completely fluent in Russian and reads Hebrew,

DOLMA Was forced to flee Tibet after she had been incarcerated for over a year because she was an activist. She had to leave her husband and children behind. After she arrived in the Netherlands she was in all sorts of detention centres and refugee housing for 5 years until her stay was approved. She is now hoping to reunite with her family.

“I’m very connected to the language and the culture.”

Almost immediately he found that many of the other refugees in his new home country needed quite a bit of help. Communication for many was difficult and stressful. He has been working and volunteering with the Vluchteling Werk network ever since.

THE DALAI LAMA Tenzin Gyatso is the 14th Dalai Lama, the spiritual leader of Tibet. He was enthroned at the age of four but his rule was brief. In 1959 there was a major uprising in Tibet and it was suspected that the Chinese government may have been planning to kill him. He fled to India and 80,000 of his followers joined him. He has been in exile ever since. MARLENE DIETRICH Was a German actress and singer. She found fame through her silent films, but left Germany during WW2 after being too outspoken. She said in an interview that

“The Germans and I no longer speak the same language.” And was so angered by

what was going on she Collaborated with the CIA to create musical propaganda against Germany and toured to raise funds for the US.

TAIDA Taida Pasić, was born in Kosovo and her family fled Kosovo in 1999 to the Netherlands. Taida grew up in the Netherlands but, in 2005 her family accepted a payment to be resettled. Taida returned to the Netherlands in 2006 on a tourist visa, to complete her final months of high school. She was arrested by immigration police while at school in March 2006. Pasić left the Netherlands for Bosnia, and took her exams in the Dutch embassy in Sarajevo. PREM Prem Shivram Shaw Radhakishun is a Dutch lawyer, columnist ,radio and television personality of Surinamese descent. He and his mother fled through French Guyana, and sought refuge in the Netherlands. Since April 2009 he has a talk show on BNR News Radio.He is also the presenter of the program &#39;De herkansing&#39;. MIA Mathangi Arulpragasam is a singer, rapper artist and Tamil national. Although born in England she grew up in Sri Lanka in the middle of the Civil War. Her father was involved in politics and as the situation escalated she was forced to flee with her mother and brother leaving her father behind. M.I.A.’s song lyrics are often infused with politics and perhaps that&#39;s what makes them popular internationally.

Just print it out doublesided and cut, to play 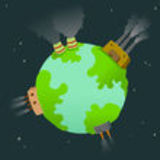