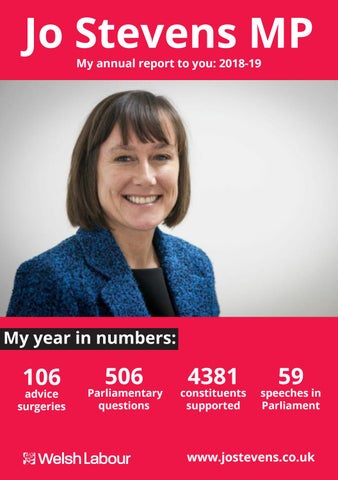 My year in numbers:

Hello, Itâ&#x20AC;&#x2122;s a privilege to be your representative in Parliament and in this, my fourth annual report to you, I hope to provide a snapshot of what I have been busy working on both in Parliament and here at home over the past twelve months. Parliament and national politics are in a very divided and uncomfortable place at the moment. Entering our tenth year of austerity, our public services are stretched to breaking point and the prospects of a recession after Brexit are increasing. Wages are stagnating and jobs are getting more and more insecure. I might be just one voice in Parliament, but I am your voice in Parliament so I am here to listen and to try to help. Thatâ&#x20AC;&#x2122;s why I have held 106 advice surgeries across Cardiff Central during the past year and supported nearly 4400 constituents. If you need my help with any local or personal issues, please get in touch or come along to one of my surgeries. Details of upcoming surgeries are available at www.jostevens.co.uk/

Sign up to my newsletter Each month I send out an e-newsletter to constituents to keep you up to date on my work in Westminster and here in Cardiff Central. To sign up to receive my newsletter direct to your inbox, please follow the link below:

Brexit We are now more than 3 years on from the referendum and over 4 months on from when the UK was expected to leave the European Union. Agreement can’t be reached because much of what was promised during the referendum campaign is impossible to deliver. We have a much better deal within the EU than anything possible outside it. That is why I voted against triggering Article 50 as there was no plan about what lay ahead and it’s why I believe we should stay in the EU. With my fellow Labour MPs, we have twice stopped the UK crashing out of the EU with no deal, we’ve rejected the terrible Theresa May deal three times and have also ensured that the new Tory Prime Minister can’t suspend Parliament in order to force through a disastrous no-deal Brexit. I’ve: • Voted consistently against a no-deal Brexit • Voted against the Prime Minister’s Brexit deal • Campaigned for, and voted for a public vote with remain as an option • Voted for the revocation of Article 50 altogether I will continue to fight against the disaster of a no-deal Brexit, campaign for a public vote on what happens next and if given the opportunity, will vote to revoke Article 50 altogether. Over 85% of Cardiff Central constituents who have contacted me about Brexit have said they want a public vote and to cancel Brexit. 20% of the entire electorate of Cardiff Central signed the UK parliament petition calling for Article 50 to be revoked. I listen carefully to Cardiff Central residents on the doorstep, on the street, whilst shopping and in the pub. Please let me know your views if you haven’t done so already.

In Parliament Digital, Culture, Media and Sport Committee I spend at least a day each week on DCMS Committee business. There are 10 MPs on the Committee from different political parties and we carry out inquiries into DCMS issues. It’s been a very busy year focusing primarily on the fight against fake news and disinformation, the dominance of global tech companies like Facebook and Google and the role of social media and big data in elections and referendums. I’ve questioned leaders of the Leave campaigns in the EU Referendum, the Electoral Commission and the Information Commissioner, as well as senior executives from Facebook, Google, Twitter and Apple. I’ve worked with MPs from 15 Parliaments around the world on evidence gathering, policy ideas and scrutiny to consider how governments can protect electoral integrity, democracy and citizens’ rights in the digital age. Many of our recommendations were adopted by the Government in its proposals to legislate against online harms. We published our long awaited report into Live Music in March - a topic of huge interest to Cardiff Central in a year where we’ve lost Gwidhŵ and Buffalo in the City Centre. We identified huge issues in the industry and made a raft of recommendations for the Government - from threats of closure to small venues, rip off ticket sellers and a lack of support for grassroots musicians. We’ve also completed inquiries into equal pay at the BBC, the scrapping of free TV licences for over 75s, reported on garden tourism, the social impact of participation in culture and sport and our inquiries into reality TV and immersive and addictive technologies continue.

Equality I was proud to be a co-signatory to amendments to the Northern Ireland Bill providing for equal marriage and abortion rights to be extended to Northern Ireland. I have co-sponsored Bills to make homophobic chanting at football matches a criminal offence and to outlaw gay conversation therapy. Step by step, we are making progress.

Fairness and Justice I’ve continued my campaign pressing for change in the law for better treatment of unaccompanied Home Office and Justice child refugees and I continue to expose failings in Home Office policy through questions and meetings with Ministers. I’ve been helping EU Nationals in Cardiff Central apply for settled status, victims of the Windrush scandal and constituents who are refugees and asylum seekers from all over the world seeking permission to remain in the UK. Because of my background as a lawyer, I continue to take a close interest in criminal and civil justice and have worked with many groups on campaigns on legal aid and access to justice and with academics, campaigners and prison reform charities on sentencing, prison and parole reform.

Police and Community Safety I’ve repeatedly raised the case for

funding and specific capital city police funding like London does. I’ve met and questioned Ministers and raised the impact of rising knife crime and our over stretched police officers directly with the Prime Minister in PMQs. I’d like to know your views on crime and community safety through an online survey I am running. Details are on the back cover of this report.

Before Christmas I teamed up with Daniel Minty from Minty’s Gig Guide and the owners of live music venue Gwdihŵ, Madeira Restaurant and the Thai House, all on the historic Victorian Guildford Crescent, to launch a campaign to save the Crescent from demolition. After a brilliant, well supported community campaign we’ve saved the historic frontages of these buildings and the Council will soon unveil their masterplan for the area.

When you elected me in 2015 I was determined to secure the finances for a desperately needed upgrade to Cardiff Central Station. I’m pleased to say that my persistent campaigning for funding has paid off, with the Government announcing £58 million for some redevelopment of Wales’s busiest rail station.

Ending Poverty Pay in Sports Stadiums Over the past year I’ve led a campaign with Citizens UK to end poverty pay in sports stadiums. 42% of people employed at sports clubs and stadiums around the country currently earn less than the real living wage of £9 an hour. I’ve met with the WRU, RFU and Scottish Rugby Union to persuade them to become accredited living wage employers.

n at the With Cllr Frank Jacobse Maelfa redevelopment

nts at my Listening to reside Coffee Morning annual Macmillan

Speaking at the sta rt of ProstateUK’s ‘March for Me

Crime Survey This magazine has included some of my highlights of the last year. Itâ&#x20AC;&#x2122;

This summer I am running a crime and community safety survey to hear your views.

If you are a constituent of Cardiff Central, please visit haveyoursaycardiffcentral.com to share your views. 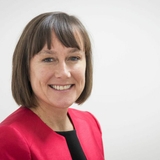 My annual report serves as a taster of the work i've been doing as your Member of Parliament over the last year. As always, if you are a Ca...

My annual report serves as a taster of the work i've been doing as your Member of Parliament over the last year. As always, if you are a Ca...