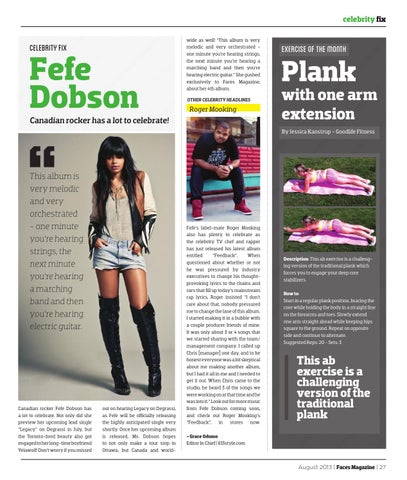 Canadian rocker has a lot to celebrate!

with one arm extension By Jessica Kanstrup - Goodlife Fitness

Canadian rocker Fefe Dobson has a lot to celebrate. Not only did she preview her upcoming lead single “Legacy” on Degrassi in July, but the Toronto-bred beauty also got engaged to her long-time boyfriend Yelawolf! Don’t worry if you missed

EXERCISE OF THE MONTH

out on hearing Legacy on Degrassi, as Fefe will be officially releasing the highly anticipated single very shortly. Once her upcoming album is released, Ms. Dobson hopes to not only make a tour stop in Ottawa, but Canada and world-

Fefe’s label-mate Roger Mooking also has plenty to celebrate as the celebrity TV chef and rapper has just released his latest album entitled “Feedback”. When questioned about whether or not he was pressured by industry executives to change his thoughtprovoking lyrics to the chains and cars that fill up today’s mainstream rap lyrics, Roger insisted “I don’t care about that, nobody pressured me to change the lane of this album. I started making it in a bubble with a couple producer friends of mine. It was only about 3 or 4 songs that we started sharing with the team/ management company. I called up Chris [manager] one day, and to be honest everyone was a bit skeptical about me making another album, but I had it all in me and I needed to get it out. When Chris came to the studio, he heard 3 of the songs we were working on at that time and he was into it.” Look out for more music from Fefe Dobson coming soon, and check out Roger Mooking’s “Feedback”, in stores now.

Description: This ab exercise is a challenging version of the traditional plank which forces you to engage your deep core stabilizers. How to: Start in a regular plank position, bracing the core while holding the body in a straight line on the forearms and toes. Slowly extend one arm straight ahead while keeping hips square to the ground. Repeat on opposite side and continue to alternate. Suggested Reps: 20 - Sets: 3

This ab exercise is a challenging version of the traditional plank