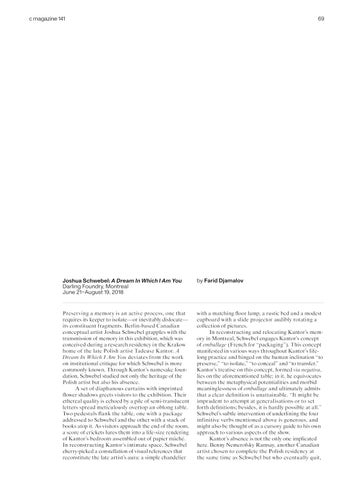 Joshua Schwebel, A Dream In Which I Am You, 2018 PHOTO: MAXIME BOISVERT

complicates Schwebel’s already ambitious pursuit by layering on yet another absence. A Dream In Which I Am You prompts Schwebel to imagine what his potential collaborator might have accomplished had he remained part of the project. From a solitary pressed wildflower placed amid the collection of correspondence between the two artists, to a hidden arrangement of dried petals tucked under the papier-mâché bed, Schwebel appropriates motifs from work that Ramsay had begun to make in Poland and, in doing so, renders him present. The floral prints lining the cupboard and gracing the bedsheets presumably mimic elements of Kantor’s actual bedroom and also enter into a dialogue with the assemblage of dried flowers inspired by Ramsay’s work. These intertwined absences manifest through Schwebel’s floral vocabulary and produce a dialogical exchange across distant—or impossible—moments of contact. In an attempt to implicate Ramsay, or nurture a collaboration that might have occurred, Schwebel engages in a curious kind of appropriation. As it turns out, in attempting to honour the absent by reconstructing some facet of them or their work, it can be unclear at what point appropriation becomes plagiarism. For example, while Ramsay was still in residence, he told Schwebel about an idea he had for an audio walk. Schwebel brought that idea to fruition— creating the audio work The Wanderer (2016). Ramsay expresses anger about that action in one of his many letters that Schwebel provides for the public to read: “I feel all the romance and flattery of your request, while also feeling protective, and almost feeling that I have been deceived. I was vaguely aware of how my withdrawal from the Kantor project influenced your own artistic contribution but to learn that you took my idea of an audio walk for The Wanderer and made it your own, without

telling me until after the fact, elicits a flash of possessiveness and a feeling of betrayal. Some of it is leftover resentment for how the residency unfolded, some of it is a disbelief that a program of artistic activity that responds to both Kantor’s traces and my own could have taken place without anyone informing me. Some of it is a personal artistic frustration without a name.” In mid-July, as part of a performance arranged with Schwebel, Ramsay appeared at the gallery to read letters he had written that both condemn and condone this exhibition. In another one of the letters, Ramsay—who is taller than Schwebel—describes a dream in which he was Schwebel, and points out the perspectival shift in his spatial perception in the dream. In turn, Schwebel penned a book with his sister Shoshana Schwebel in the form of a fictional dialogue, wherein he impersonates Ramsay, and his sister plays her brother. In this way and others, the exhibition hinges on what Ramsay has aptly called a “mysterious collaboration,” with unstable and interesting subjective contours. A Dream In Which I Am You explores the fraught processes of memory preservation. In doing so, this exhibition honours the absent and employs interesting appropriation techniques to imagine the ways that a memory keeper might transcend the limitations of their own subjectivity. Farid Djamalov is a writer and an art history major at Dartmouth College. He is currently interning at the Garage Museum of Contemporary Art in Moscow. A Dream in Which I Am You, reviewed by Farid Djamalov

A Dream in Which I Am You, reviewed by Farid Djamalov