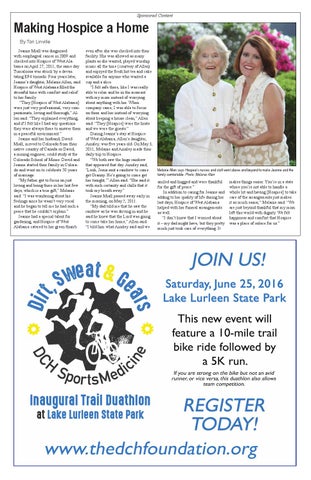 Making Hospice a Home By Tori Linville Jeanne Miall was diagnosed with esophageal cancer in 2009 and checked into Hospice of West Alabama on April 27, 2011, the same day Tuscaloosa was struck by a devastating EF4 tornado. Four years later, Jeanne’s daughter, Melanie Allen, said Hospice of West Alabama filled the stressful time with comfort and relief to her family. “They [Hospice of West Alabama] were just very professional, very compassionate, loving and thorough,” Allen said. “They explained everything, and if I felt like I had any questions they were always there to answer them in a peaceful environment.” Jeanne and her husband, David Miall, moved to Colorado from their native country of Canada so David, a mining engineer, could study at the Colorado School of Mines. David and Jeanne started their family in Colorado and went on to celebrate 50 years of marriage. “My father got to focus on just loving and being there in her last few days, which is a true gift,” Melanie said. “I was wondering about his feelings since he wasn’t very vocal and he began to tell me he had such a peace that he couldn’t explain.” Jeanne had a special talent for gardening, and Hospice of West Alabama catered to her green thumb

even after she was checked into their facility. She was allowed as many plants as she wanted, played worship music all the time (courtesy of Allen) and enjoyed the fresh hot tea and cake available for anyone who wanted a cup and a slice. “I felt safe there, like I was really able to relax and be in the moment with my mom instead of worrying about anything with her. When company came, I was able to focus on them and her instead of worrying about keeping a house clean,” Allen said. “They [Hospice] were the hosts and we were the guests.” During Jeanne’s stay at Hospice of West Alabama, Allen’s daughter, Ainsley, was five years old. On May 3, 2011, Melanie and Ainsley made their daily trip to Hospice. “We both saw the huge rainbow that appeared that day. Ainsley said, ‘Look, Jesus sent a rainbow to come get Granny. He’s going to come get her tonight,’” Allen said. “She said it with such certainty and chills that it took my breath away.” Jeanne Miall passed away early in the morning, on May 5, 2011. “My dad told me that he saw the rainbow as he was driving in and he said he knew that the Lord was going to come take her home,” Allen said. “I told him what Ainsley said and we

Melanie Allen says Hospice’s nurses and staff went above and beyond to make Jeanne and the family comfortable. Photo: Melanie Allen

smiled and hugged and were thankful for the gift of peace.” In addition to caring for Jeanne and adding to her quality of life during her last days, Hospice of West Alabama helped with her funeral arrangements as well. “I don’t know that I worried about it – my dad might have, but they pretty much just took care of everything. It

makes things easier. You’re in a state where you’re not able to handle a whole lot and having [Hospice] to take care of the arrangements just makes it so much easier,” Melanie said. “We are just beyond thankful that my mom left this world with dignity. We felt happiness and comfort that Hospice was a place of solace for us.” 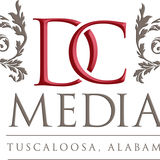