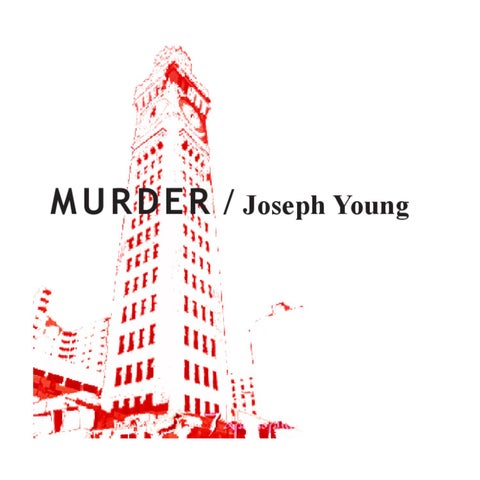 Being the record of the murders of the Bromo Seltzer Arts Tower. Copyright 2012 Joseph Young

Delicious All the while the corpus delicti, the Spanish dictionaries, the manâ&#x20AC;&#x2122;s bright apple. The wind in the cornice told it all: There we are, heading for a steep hill of skulls.

May You Have the Body The woman said there wasnâ&#x20AC;&#x2122;t time, a passing of the clean white bread. She held the jobs of corporations, ranks of each a crippled child.

The Manâ&#x20AC;&#x2122;s Burden Half the instruments in half the floor, the titlements of words. They stood on the roofs of cruisers, drinking for a china dog.

The Wicked Do Not Appeal The four of concrete teeth, the five of black girlâ&#x20AC;&#x2122;s hair.

Scholar Of all the animals, the apes their jurisprudence. With the ticking of fleas, the boys will take their girls as girls shall make their boys.

The Favored The angry last and his robber kiss, he passes twice for silver. But in the mark of everything, once theyâ&#x20AC;&#x2122;ll always sleep.

Joseph Young lives in Baltimore. His book of microfictions, Easter Rabbit, was released by Publishing Genius in December 2009. His art has appeared in near and distant galleries. Visit him at www.verysmalldogs.blogspot.com.