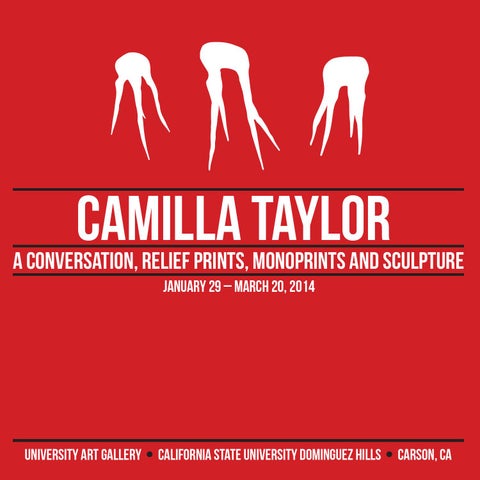 camilla taylor: Among us Art is never definitive, but consists of multiple meanings constructed by both the artists and the viewer. Although an artist may state what an artwork is about, viewers will always input their opinions, meanings, and stories to the artwork, which is important as viewers are the ones constructing the multiple meanings. Camilla Taylor is an artist that is fascinated with viewers constructing stories of her work and although she shares the concepts behind her work, the concepts are broad enough for these constructions. By examining three of her works, I don’t like that, I’ve never like that, With Only These, and He Never Came Back I, Taylor’s concept of staging, isolation, and familiarity, intertwine to create the narratives (stories) that interest Taylor.

PROCESS The framework of Taylor’s sculptures consists of a complex process in which her concepts are transcended through her imagery. She does take certain steps when working on a sculpture. The first step in the process is making sketches of the sculptures. After the sketches are complete, Taylor

makes unique three-dimensional patterns for each sculpture on which she paints or draws imagery onto the blank fabric form. Once the drawing or painting is complete, Taylor takes it apart to make the relief prints. Making the relief print for each individual sculpture takes the longest, but once the prints are ready, the next few steps consist of assembling the pieces to create the complete sculpture. Assembling the sculpture includes printing out the relief patterns, welding the steel infrastructure, and sewing the fabric patterns together. In some of the sculptures, such as He Never Came Back I, Taylor has sewn buttons and additional fabric on top of the sculpture making it more elaborate, which adds more texture.

Artwork Considering Taylor’s concepts of her work, I don’t like that, I’ve never like that, exemplifies alienation in a crowd while stories are also constructed. In I don’t like that, I’ve never like that, different sized abstract figures, which seem fragile, stand in a group without facing one another. Taylor has said that while most of the faces on the figures are unique, there are repetitive faces as well; this compares to society where faces or people are unique, yet have shared features. The repeating and unique faces have an expression of being lost, which leads the viewer to share the same notion of feeling lost. The tallest figure is stationary, whereas the rest are seen in movement (as seen by the legs where one leg is in front of the other, as if they are walking). The use of relief print on fabric, and found fabric, adds textures and further stories to the sculptures as most have found fabric sewn on them, which create patterns or abstract images. Overall, the figures seem to be like newspapers that everyone can read.

to demonstrate her concepts, in He Never Came Back I, the facial expressions seem to suggest the trapping of an idea or of a person. Taylor’s work exemplifies art has elements of making the viewer feel familiar, yet isolated from any stories found in her imagery. There are no right or wrong answers when looking at a work of art, especially when the artist, like Taylor, is willing to leave the meaning of work of art up to the viewers. —Evangelina Cortez, Class of 2014

With Only These exhibits some of the same concepts as I don’t like that, I’ve never like that, but the works differs in how the viewer approaches the concept of alienation. With Only These, consists of several identical abstract four-legged creatures; the faces of the creatures are similar to Taylor’s other works were they are abstracted human faces. The creatures’ bodies are fascinating since they look as if they have wings but in reality, the “wings” are elongated hands that seem to force the creature to bow down. It is interesting to see that even in groups of creatures the concept of alienation is present. He Never Came Back I, is an individual sculpture of a white headless four-legged creature that contains sewn on found fabrics, relief prints, and polymer clay buttons. The white fabric contrasts with the dark buttons, relief pattern, and found fabric, creating a higher degree of texture. The buttons also add texture to the sculpture but they are more interesting because some of the buttons are actually small molded faces. The wide-opened eyes and slightly opened mouth make the molded faces seem lost and incomplete. Although Taylor uses the buttons

Sponsored by: the College of Arts and Humanities and the Instructionally Relaed Activities Committee of the Associated Students Inc.