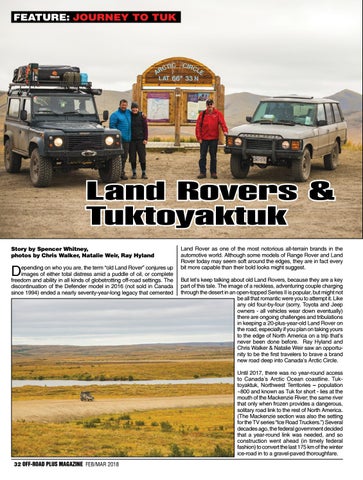 epending on who you are, the term “old Land Rover” conjures up images of either total distress amid a puddle of oil, or complete freedom and ability in all kinds of globetrotting off-road settings. The discontinuation of the Defender model in 2016 (not sold in Canada since 1994) ended a nearly seventy-year-long legacy that cemented

Land Rover as one of the most notorious all-terrain brands in the automotive world. Although some models of Range Rover and Land Rover today may seem soft around the edges, they are in fact every bit more capable than their bold looks might suggest. But let’s keep talking about old Land Rovers, because they are a key part of this tale. The image of a reckless, adventuring couple charging through the desert in an open-topped Series II is popular, but might not be all that romantic were you to attempt it. Like any old four-by-four (sorry, Toyota and Jeep owners - all vehicles wear down eventually) there are ongoing challenges and tribulations in keeping a 20-plus-year-old Land Rover on the road, especially if you plan on taking yours to the edge of North America on a trip that’s never been done before. Ray Hyland and Chris Walker & Natalie Weir saw an opportunity to be the first travelers to brave a brand new road deep into Canada’s Arctic Circle. Until 2017, there was no year-round access to Canada’s Arctic Ocean coastline. Tuktoyaktuk, Northwest Territories – population ~800 and known as Tuk for short - lies at the mouth of the Mackenzie River; the same river that only when frozen provides a dangerous, solitary road link to the rest of North America. (The Mackenzie section was also the setting for the TV series “Ice Road Truckers.”) Several decades ago, the federal government decided that a year-round link was needed, and so construction went ahead (in timely federal fashion) to convert the last 175 km of the winter ice-road in to a gravel-paved thoroughfare. 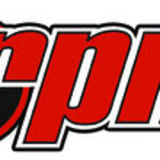