The Art of Dispersing 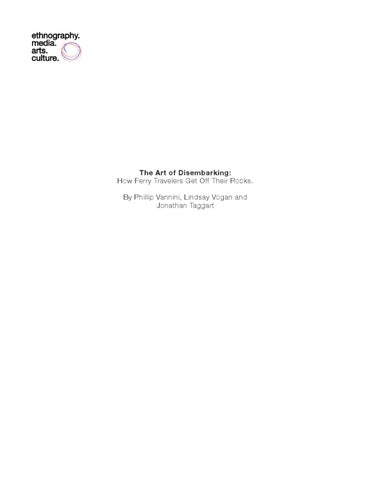 The Art of Disembarking: How Ferry Travelers Get Off Their Rocks. By Phillip Vannini, Lindsay Vogan and 足J onathan Taggart

The 10:15 M/V Coastal Inspiration has almost completed her journey to the Tsawwassen BC Ferries terminal, just south of Vancouver. Traffic is heavy, and the ferry is packed with weekenders and vacationers returning from their idyllic island getaways. Over 350 recreational vehicles, trailers, vans, SUVs, and cars stuffed with camping gear, suitcases, sand toys, and souvenirs crowd the two decks of the 10,000 tonne spankingnew ferry. “It is now time for all drivers and passengers to return to their vehicles,” the bridge announces over the crisp-sounding PA system. Well over a thousand riders begin to descend from the main passenger decks through the stairs and elevators. Amongst them are Ruth and Paul Cameron—a couple visiting from Alberta. “Honey, where did we park?” asks Ruth. “Wait...” grumbles Paul, “I asked you to write that down!” Not unlike airport and shopping center parking lots, large ferry decks are the daily stage of mundane dramas of the kind brilliantly epitomized in the famous Seinfeld episode in which

Jerry and friends waste the better part of their weekend jaunt to the mall in a desperate search of their parked car. BC Ferries crew witness these short-lived suspenseful tragedies at the end of just about every sailing, regularly witnessing to the final meltdowns of fatigued parents, soon-to-be- estranged spouses, and strained young dating couples.

“Didn’t you say we parked by the Orca sign?” whines Ruth as she huffs and puffs her way up the stairs, back to the upper car deck. “I thought it was a whale of some kind. Or maybe a seal,” Paul hollers as he slaloms around the flood of bodies walking in the opposite direction. With every ticking second Paul and Ruth’s blind search for their 2006 Camry becomes more intense. Losing one’s car aboard a huge ferry is a downward-spiraling drama that begins with mild annoyance, and then led by frustration and shame takes the hapless protagonist into a deepening crisis of anxiety, anger, and panic. All for everyone to see and chuckle at.

Day-trippers, seasonal residents, tourists, and locals alike have all lost their car on the ferry, at one time or another—whether they are willing to admit it or not. While experiences of catching and missing one’s ferry have long been the subject of much coastal folklore and have left their indelible mark upon the subconscious of every islander and coaster, the routine of disembarking seems to have been taken for granted and has more or less escaped everyone’s awareness. But not mine.

I became sensitized to the art of disembarking in early 2007 during my first trip to Haida Gwaii. The M/V Queen of Prince Rupert unceremoniously dropped me off at Skidegate at 6 o’clock in the morning. It was pitch dark. I was expecting to be welcomed with arms wide open by a cornucopia of hip java lounges and toastywarm bakeries, but I was sorely mistaken. Neither Skidegate nor nearby Queen Charlotte City was any kind of Tofino or Whistler—I quickly learned—as I waited to hitch a ride into town

while counting eagles to keep myself awake. Haida Gwaii soon turned out to be a crash course in the art of disembarking. Moved by the quest of catching every ferry in the fleet, the following day I sailed on the M/V Kwuna from Skidegate on Graham Island to Alliford Bay on Moresby Island. The very minute I stepped off the Kwuna I realized something had gone horribly wrong in my witless plan: if Skidegate was no Tofino, then Alliford Bay was no Skidegate. Luckily I wasn’t the only human stranded in the middle of nowhere. A passenger that earlier I had befriended on my ride over—an older Haida lady—had a guaranteed ride into the village. Or so she was promised. With no pay phone, no cell phone reception, and a rude noshow from her friend, all that was left for the two of us was to use her friendly charms to hitch a hike. As if anybody were driving on the road. By the time we reached the village of Alliford Bay—which was as empty as a BC Ferry boat during a playoff Canucks game—I quickly realized that I’d better hang on to a motorized vehicle as long I was on one. I wish I could have taken a picture of my driver’s face when I asked

him if he wouldn’t mind driving me straight back to the ferry. “Travel is a performance. It all begins with a gathering. Then the show gets going. Then the show is over and people move on with their life.” Just as it takes practice to learn how to drive a car, to find your way around a place, or to catch a ferry, it takes practice to disembark off one. As far as displays of skills of movement go, disembarking is a very public one. When you get off a ferry you are hardly ever alone. Crew, other passengers, and people waiting ashore make up a motley but often discerning audience. Any misstep is likely to stock the local fodder of entertainment for days or weeks. Even one’s mere being out of place can’t help but make the rounds of local gossip as I found out the day I disembarked the M/V Queen of

ting to where the action is. Then there is the actual show—whether that is a football game, a séance, a theatrical play, or a ferry (rite of) pas-

While experiences of catching and missing one’s ferry have long been the subject of much coastal folklore . . . the routine of d ­ isembarking seems to have been ­taken for granted sage. And then there is the dispersing— through which a performance is brought to conclusion in virtue of leaving the stage, the bleachers, or in our case the ferry boat. Travelling by ferry is a public performance—and some actors are more, while others are less, skilled at playing along.

Chilliwack in the remote village of Klemtu, well in advance of the somewhat busy summer season. “But you don’t know what I look like. How will you know it’s me?” I asked the local resident who was supposed to come pick me up at the ferry terminal upon my arrival. “Don’t worry,” she reassured me on the phone with an audible giggle, “I’ll know.” Performance studies scholar Richard Schechner argues that performances of all kinds can be understood as a three-phase process. First there is the gathering—which consists of the preparation part, the planning, and the get-

Amongst the stars of this genre are the daily commuters. “You can tell who’s a long-time commuter by how early to get off their seats,” tells me Vienna, a Thetis Island resident who catches the ferry to Chemainus daily. There are no docking announcements on the smaller ferries, so “tourists stand up when the engine of the ferry slows down, when you can hear the gears shift.” That’s a full five minutes before the ferry docks, she explains, plenty of time to finish a book chapter or wrap up a game of Sudoku. “The locals instead get up from their seats after the ferry has bumped into the dock. Not a second before, as some days the bump is so hard that it can knock you off your feet. And trust me; you don’t want to fall in front of everybody.” In the upper echelon of star performers are also Cortes Islanders. To reach Cortes one must first embark at Campbell River on Vancou-

ver Island and disembark at Quathiaski Cove on Quadra Island, then drive across Quadra to reach the ferry terminal at Heriot Bay. Even though lane 8 at the Campbell River terminal is reserved for Cortes Islanders to load first the M/V Powell River Queen, there is always the haunting feeling that you need to drive pedal to the metal to get to Heriot Bay. “That’s why we call it the Quadra 500,” tells me Cortes Island’s speed-demon Richard. “And you know what drives me ballistic?” he adds as his face swells up in anger, “when the ferry crew forget about us and unload the Quadra lanes first, and we have to race around them!” Sprinting on foot off the ferry is an equally intense athletic performance. There are busses to catch, other sailings to be caught, and errands to be run before the next ferry back home. For example, at the Horseshoe Bay ferry terminal, in West Vancouver, three ferry routes converge. There, Bowen Islanders, Vancouver Islanders, and Sunshine Coast residents have to compete for the few available seats on the 257 express bus to downtown Vancouver. And don’t joke yourself into thinking that once you’ve made it

on the bus the performance is over. “Just about everybody on the bus is an islander or coaster,” tells me Rena from Gibsons, “and hardly anybody knows what stop to get off, so we’re always comparing notes with one another. It’s like

the blind leading the blind.” Islanders and coasters may have honed their ferry disembarking skills at the expense of their bus disembarking skills, but regardless of all that practice, no foot passenger yet seems to have figured out which side of the big ferries they are supposed to disembark from. “Despite a 50-50 chance everybody seems to be getting it wrong all the time,” comments Dave from Nanaimo. “Regardless of whether it’s Horseshoe Bay, Departure Bay, Tsawwassen, or Swartz Bay, guessing whether the exit door is on the port or starboard side is a hopeless feat. It changes all the time.” As a Gabriola Islander these days I have different worries on my mind. No matter what day of the week, what time of the day, and what crew is working, I inevitably get stuck on the outside lines of the car deck. And regardless of whether I’m on the port or starboard outside lane one thing is for sure: my lane will be unloaded last. Hardly a tragedy, I know, but after a few days on quiet Gabriola getting off the ferry and getting reacquainted with traffic lights and the actual presence of other vehicles on the road is a shock in itself—let alone doing it with 40 cars ahead of you. In the meantime our accursed Alberta couple has managed to retrieve their car— which had been hiding behind a muddy, large off-road truck hailing from Courtenay. As Ruth and Paul’s anger toward each other smolders in the dubious comfort of their still sandy car seats, the Coastal Inspiration bumps against the pier at Tsawwassen. Seconds later, the Courtenay off-roader shows up to unlock her truck doors, looking relaxed, unhurried, and slightly more tanned than she was two hours ago. And it looks like she managed to finish reading the last chapter of her book too.

The Art of Dispersing