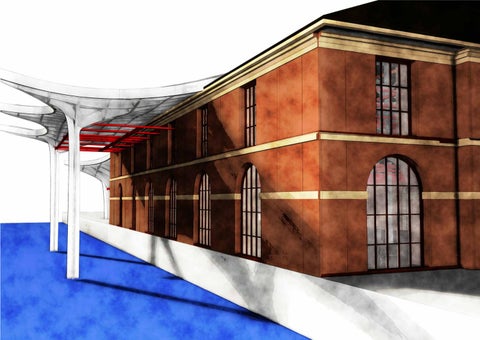 On the Hydraulic multiplier or 'jigger' the pulley system ampliďŹ ed the distance the lifting rope moved for a given movement of the piston, this also meant that the load moved up or down a lot faster than the piston. There were occasions where rapid loading and unloading was an advantage, a good example being a canal, river or sea wharf, and hydraulic hoists and cranes were common in these applications. They were also common on warehouses, the jigger was usually mounted in the lower part of the building, with the lifting cable run up to a 'cat head' near the top of the building and providing access to a series of opening ranged up the building for each ďŹ&#x201A;oor.

The jiggers could be mounted either inside or outside, on free-standing hydraulic cranes they were mounted inside the base of the crane. Where the crane or hoist was mounted on a building they were usually bolted to a wall close by the lift (on the outside of buildings it was typically set vertically into a recess). The example shown is a Jigger of this type. The moveable dock crane, running on rails or small wheels on the quay side, had the jigger mounted inside the base. This had a pulley set at the top but at the bottom there was a set of pulleys on either side as the bottom of the ram was mounted on the base frame of the crane. This resulted in a characteristic tapering base to the crane.

Time and Motion Study by Taylorist Frank Gilbreth (1913) Taylor’s approach to optimizing worker eﬃciency involved the conducting of scientiﬁc “time and motion” studies. This form of analysis can be seen as mirroring, in a more rigorous manner, the artistic attempts of the Futurists to capture the dynamics of movement and kinetics. On an even deeper level, it can be understood as a further extension and reﬁnement of the regime of abstract time that already held sway under capitalism. The Gilbreths’ invention of chronocyclegraph techniques in order to meet “the necessity of recording unit times,…the need for including time study with motion study” so as to “record the [labor] motions used” — this advanced the mode of abstract time calculation to almost an exact science. This had obvious implications for the increased eﬃciency and productivity of labor.

Section 1:50 of a Narrow Boat with perspective

First iteration of the design on which i have practiced, but ran into problem on covering the whole desired area.

The ďŹ nal form which optimizes the desired area, and interest points from previous designs