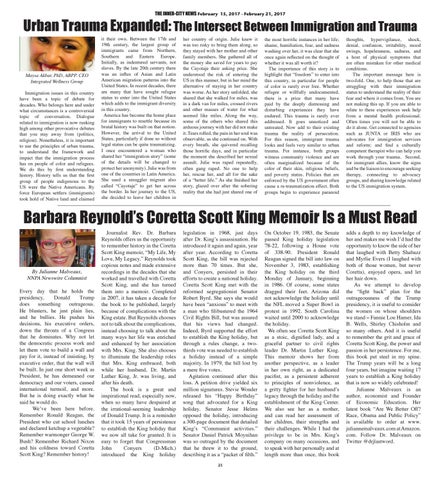 Urban Trauma Expanded: The Intersect Between Immigration and Trauma Maysa Akbar, PhD, ABPP. CEO Integrated Wellness Group Immigration issues in this country have been a topic of debate for decades. Who belongs here and under what circumstances is a controversial topic of conversation. Dialogue related to immigration is now ranking high among other provocative debates that you stay away from (politics, religion). Nonetheless, it is important to use the principles of urban trauma, to understand the framework and impact that the immigration process has on people of color and refugees. We do this by first understanding history. History tells us that the first group of people indigenous to the US were the Native Americans. By force European settlers (immigrants) took hold of Native land and claimed

it their own. Between the 17th and 19th century, the largest group of immigrants came from Northern, Southern and Eastern Europe. Initially, as indentured servants, not slaves. By the late 20th century there was an influx of Asian and Latin American migration patterns into the United States. In recent decades, there are many that have sought refugee status to enter into the United States which adds to the immigrant diversity in this country. America has become the home place for immigrants to resettle because its brutal history was built on that notion. However, the arrival to the United States, particularly if done so without legal status can be quite traumatizing. I once encountered a woman who shared her “immigration story” (some of the details will be changed to protect her anonymity). Julie was from one of the countries in Latin America. She used a smuggler migrant also called “Cayotaje” to get her across the border. In her journey to the US, she decided to leave her children in

her country of origin. Julie knew it was too risky to bring them along, so they stayed with her mother and other family members. She gathered all of the money she saved for years to pay the Cayotaje their asking price. She understood the risk of entering the US in this manner, but in her mind the alternative of staying in her country was worse. As her story unfolded, she shared that she walked for miles, was in a dark van for miles, crossed rivers and other masses of water for what seemed like miles. Along the way, some of the others who shared this arduous journey with her did not make it. Tears rolled, the pain in her soul was observable, as she continued on. With every breath, she quivered recalling those horrific days, and in particular the moment she described her sexual assault. Julie was raped repeatedly, often gang raped. No one to help her, rescue her, and all for the sake of a “better life.” As she finished her story, glazed over after the sobering reality that she had just shared one of

the most horrific instances in her life; shame, humiliation, fear, and sadness washing over her, it was clear that she once again reflected on the thought of whether it was all worth it? The importance of this story is to highlight that “freedom” to enter into this country, in particular for people of color is rarely ever free. Whether refugee or willfully undocumented, there is a price that many have paid by the deeply distressing and disturbing experiences they have endured. This trauma is rarely ever addressed. It goes unnoticed and untreated. Now add to their existing trauma the reality of persecution. For this reason, immigrant trauma looks and feels very similar to urban trauma. For instance, both groups witness community violence and are often marginalized because of the color of their skin, religious beliefs, and poverty status. Policies that are enforced by the US government often cause a re-traumatization effect. Both groups begin to experience paranoid

thoughts, hypervigilance, shock, denial, confusion, irritability, mood swings, hopelessness, sadness, and a host of physical symptoms that are often mistaken for other medical conditions. The important message here is two-fold. One, to help those that are struggling with their immigration status to understand the reality of their fear and where it comes from. You are not making this up. If you are able to relate to these experiences seek help from a mental health professional. Often times you will not be able to do it alone. Get connected to agencies such as JUNTA or IRIS who are advocates for immigration services and reform; and find a culturally competent therapist who can help you work through your trauma. Second, for immigrant allies, know the signs and be the liaison to encourage seeking therapy, connecting to advocacy groups, and sharing knowledge related to the US immigration system.

Barbara Reynold’s Coretta Scott King Memoir Is a Must Read By Julianne Malveaux, NNPA Newswire Columnist Every day that he holds the presidency, Donald Trump does something outrageous. He blusters, he just plain lies, and he bullies. He pushes his decisions, his executive orders, down the throats of a Congress that he dominates. Why not let the democratic process work and let them vote to build a wall and pay for it, instead of insisting, by executive order, that the wall will be built. In just one short week as President, he has demeaned our democracy and our voters, caused international turmoil, and more. But he is doing exactly what he said he would do. We’ve been here before. Remember Ronald Reagan, the President who cut school lunches and declared ketchup a vegetable? Remember warmonger George W. Bush? Remember Richard Nixon and his coldness toward Coretta Scott King? Remember history!

Journalist Rev. Dr. Barbara Reynolds offers us the opportunity to remember history in the Coretta Scott King memoir, “My Life, My Love, My Legacy.” Reynolds took copious notes and made extensive recordings in the decades that she worked and travelled with Coretta Scott King, and she has turned them into a memoir. Completed in 2007, it has taken a decade for the book to be published, largely because of complications with the King estate. But Reynolds chooses not to talk about the complications, instead choosing to talk about the many ways her life was enriched and enhanced by her association with Mrs. King. She also chooses to illuminate the leadership roles that Mrs. King embraced, both while her husband, Dr. Martin Luther King, Jr. was living, and after his death. The book is a great and inspirational read, especially now, when so many have despaired at the irrational-seeming leadership of Donald Trump. It is a reminder that it took 15 years of persistence to establish the King holiday that we now all take for granted. It is easy to forget that Congressman John Conyers (D-Mich.) introduced the King holiday

legislation in 1968, just days after Dr. King’s assassination. He introduced it again and again, year after year. According to Coretta Scott King, the bill was rejected more than 70 times. But she, and Conyers, persisted in their efforts to create a national holiday. Coretta Scott King met with the reformed segregationist Senator Robert Byrd. She says she would have been “anxious” to meet with a man who filibustered the 1964 Civil Rights Bill, but was assured that his views had changed. Indeed, Byrd supported the effort to establish the King holiday, but through a rules change, a twothirds vote was needed to establish a holiday instead of a simple majority. In 1979, the bill lost by a mere five votes. Agitation continued after this loss. A petition drive yielded six million signatures. Stevie Wonder released his “Happy Birthday” song that advocated for a King holiday. Senator Jesse Helms opposed the holiday, introducing a 300-page document that detailed King’s “Communist activities.” Senator Daniel Patrick Moynihan was so outraged by the document that he threw it to the ground, describing it as a “packet of filth.”

On October 19, 1983, the Senate passed King holiday legislation 78-22, following a House vote of 338-90. President Ronald Reagan signed the bill into law on November 3, 1983, establishing the King holiday on the third Monday of January, beginning in 1986. Of course, some states dragged their feet. Arizona did not acknowledge the holiday until the NFL moved a Super Bowl in protest in 1992. South Carolina waited until 2000 to acknowledge the holiday. We often see Coretta Scott King as a stoic, dignified lady, and a graceful partner to civil rights leader Dr. Martin Luther King. This memoir shows her from another perspective, as a leader in her own right, as a dedicated pacifist, as a persistent adherent to principles of nonviolence, as a gritty fighter for her husband’s legacy through the holiday and the establishment of the King Center. We also see her as a mother, and can read her assessment of her children, their strengths and their challenges. While I had the privilege to be in Mrs. King’s company on many occasions, and to speak with her personally and at length more than once, this book

adds a depth to my knowledge of her and makes me wish I’d had the opportunity to know the side of her that laughed with Betty Shabazz and Myrlie Evers (I laughed with both of those women, but never Coretta), enjoyed opera, and let her hair down. As we attempt to develop the “fight back” plan for the outrageousness of the Trump presidency, it is useful to consider the women on whose shoulders we stand – Fannie Lou Hamer, Ida B. Wells, Shirley Chisholm and so many others. And it is useful to remember the grit and grace of Coretta Scott King, the power and passion in her persistence. For me, this book put steel in my spine. The Trump years will be a long four years, but imagine waiting 17 years to establish a King holiday that is now so widely celebrated! Julianne Malveaux is an author, economist and Founder of Economic Education. Her latest book “Are We Better Off? Race, Obama and Public Policy” is available to order at www. juliannemalveaux.com at Amazon. com. Follow Dr. Malveaux on Twitter @drjlastword.