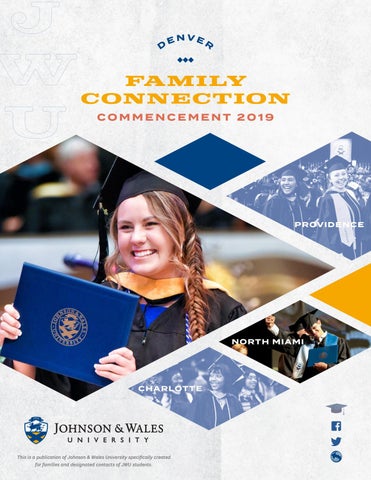 This is a publication of Johnson & Wales University specifically created for families and designated contacts of JWU students.

commitment to provide job and internship

Concert Hall provided the perfect ‘in the round’

opportunities to our students and graduates

ambiance to house 3,000 people for the Denver

each year. He encouraged graduates to own their

all begins with a handshake.”

followed by a special

director of special events for

performance of the national

honored to be the first

lessons: be yourself, never

and don’t get comfortable.

honors student to deliver the

He concluded his speech by

She shared her realization

for growth. “This is our moment to account for how much we have grown as students and professionals and take this leap into the unknown,” she said. Honorary degree recipient Sean McNicholas, president and CEO of Service Systems Associates,

on their journey. As the graduates reopened their

that big transitions and uncomfortable situations are the best opportunities

close their eyes to reflect

eyes, the audience held their flashlights high to represent the opportunities and support ahead of them. With smiles, cheers and tears, the Class of 2019 was sent forth to continue to make an impact on the world and encompass the Wildcat Way.

delivered the commencement address. McNicholas truly represents the JWU community with his

He also found inspiration in his peers, who stayed

their educational course while juggling academic

students from the colleges of Arts & Sciences,

and extracurricular responsibilities — often while

by urging the Class of

were the first to receive their

commitment for yourself, and use it to tackle everything

Pezza, an accomplished student-athlete and member

of the Wildcat Investment

portfolio fund, traced how his

his definition of commitment.

of remaining passionate about

understanding of the word was

what you do: “Stay true to the

path you want and follow it hard.” Sometimes, however, there

marked the first shift. “No matter what adversity

are unexpected bumps in that road. “The world is

we faced, the men I played with showed up with the

not tidy and will never be,” he told graduates. “My

same intensity each day because of a commitment to

advice is to bend with the road, and to see every

something greater than themselves.” Pezza also took

challenge as beneficial in your development. ... Do

inspiration from JWU’s faculty, who “expanded our

not always plan the next step or next job but focus

understanding of the word through their unwavering

dedication to our development as students

those who do a great job.”

and individuals. Through them, I learned that commitment means selflessness and dependability.”

BE INST IGAT OR S OF CH A NGE At JWU’s afternoon ceremony, undergraduates from

and partner of the Istanbul Food & Beverage Group,

owner of nicks on broadway, were each awarded a

Both chefs are staunch

believers in the ability of food

keynote speech served as a

call to action: “Our work is

During her time at JWU, she

changing. It is not just about pushing out new dishes or

juggled a full-time job with

serving up the coolest or

including serving as president

Chef José Andrés has been

of a local animal shelter.

nominated for the Nobel

the amount of grit that goes

businesses are more and more

into this program,” she noted. “We’ve endured excruciatingly long labs in hot kitchens.

We have made best friends

instigators of change.” He urged graduates to be part of that change: “Not only can

with compression socks and literally gained over

we make life better, but we can also make it tastier.

one million steps on our pedometers. And, when

Filled with pleasure — that is, if we choose good

our pizza dough was too sticky or our bread dough

was over-proofed, we didn’t give up. We simply

In conclusion, he urged the crowd to pause to

remembered what Chef Lumi [Cirstea] always told us: ‘Love your dough, and your dough will love you back!’”

Wilkinson’s words of wisdom resonated with the

Campus, the four tenets of the Wildcat Way —

the tone for what it’s like to be a Wildcat. During

the 2019 commencement ceremony, that theme

set an example for his family by pursuing his

could not have been more

MBA. In exchange for his

to share this special day with his son, Matheus

served 22 years with the

“It meant the world to

me to graduate with my

his decisions as assistant

had to move at a fast

pace to be sure we would

graduate together. So, in

and George W. Bush. He

the summer I took three

classes to be able to make

president as he decided to “leave Flight 93 in the air

or bring it down to prevent

Between Wilkinson’s accomplishments and

even more lives from being lost on September 11,” and reminded graduates

Lesende’s achievements, our 2019 graduates show that they are prepared to make a difference in their community — and that’s the Wildcat Way.

ceremony when she earned an associate degree

dock to don their gowns, take selfies and touch

in applied science from JWU’s College of

up their decorative caps at the JWU Charlotte

May 18. Nearly 550 students were ready to accept their diplomas.

seizures during her younger years. The Culinary Arts and Food Service

— until her junior year.

class. “Every decision we

have made and every class

she can feel the seizures

that we have taken has led

coming on. “I get dizzy,

us to this moment,” she

said. “When you stood in a

and get light headed, but

normally I have seizures

it was leading up to this.

gave everything and had

nothing left to give, it was

this year was not due to

leading up to this. Now, I

health issues. Worth has

am not saying it was easy by any means, but what I

am saying is, it was totally

could not attend the ceremony to receive her bachelor’s degree in Food Service Management, she participated in the 2017 commencement

family friend who also has epilepsy. She helped plan

worth it.” Samantha Worth ’19 would agree. Although she

formed a tight bond with a

this friend’s wedding and knew it was important to attend — the wedding just happened to be on the same day as commencement. 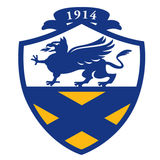