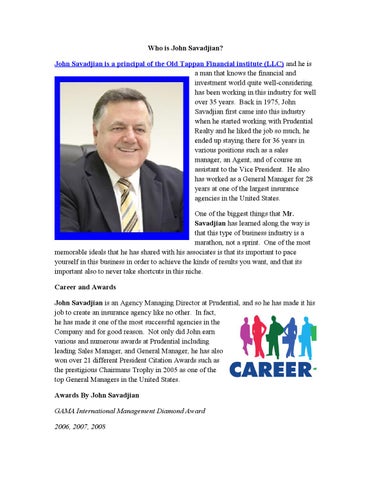 Who is John Savadjian? John Savadjian is a principal of the Old Tappan Financial institute (LLC) and he is a man that knows the financial and investment world quite well-considering has been working in this industry for well over 35 years. Back in 1975, John Savadjian first came into this industry when he started working with Prudential Realty and he liked the job so much, he ended up staying there for 36 years in various positions such as a sales manager, an Agent, and of course an assistant to the Vice President. He also has worked as a General Manager for 28 years at one of the largest insurance agencies in the United States. One of the biggest things that Mr. Savadjian has learned along the way is that this type of business industry is a marathon, not a sprint. One of the most memorable ideals that he has shared with his associates is that its important to pace yourself in this business in order to achieve the kinds of results you want, and that its important also to never take shortcuts in this niche. Career and Awards John Savadjian is an Agency Managing Director at Prudential, and so he has made it his job to create an insurance agency like no other. In fact, he has made it one of the most successful agencies in the Company and for good reason. Not only did John earn various and numerous awards at Prudential including leading Sales Manager, and General Manager, he has also won over 21 different President Citation Awards such as the prestigious Chairmans Trophy in 2005 as one of the top General Managers in the United States. Awards By John Savadjian GAMA International Management Diamond Award 2006, 2007, 2008

Recognizes John’s excellence in distribution management for the insurance and financial services industry. GAMA International is a worldwide professional association serving 5,500 field and home office distribution leaders in the insurance and financial services industry. The association provides a variety of education and training resources and is located at www.gamaweb.com.

As one would expect from such a leading man as John, he is also heavily into his community and supports the 200 Club of Bergen County. This "club" has one mission and that is to provide financial and emotional support to the people of Bergen County which helps to serve police, Fire, and EMS families and personnel in the event of a death of a loved one in the line of duty. The Club also helps support in terms of scholarships.

John also is a member of the Bakradouny Lodge #38, Knights of Vartan. This is an organization that was founded back in 1916 and they have over 25 different lodges in the US and Canada. Their main goal is to do charitable work, as well as educational support not only in their community but overseas as well. Commitment to Clients Since way back when, when John Savadjian first entered this industry, much has changed, then from now, but John has always had the same client commitment back when he first started that he does now. And that is to have a long-term business relationship with his clients and to be someone they can trust, be someone that is knowledgeable, and be someone who will give them objective advice about their financial matters. One of Johns main concerns in this industry is his Clients, they are after all, one of the most important aspects of any Advisors career. People that work with John have a unique and special relationship with him. Not only does he give advice to his clients, but he has also counseled various businesses and families on how to structure their finances for things like future needs; retirements, college funds, and how to preserve their wealth in the long run. 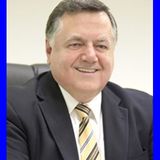 John Savadjian is a principal of the Old Tappan Financial institute (LLC) and he is a man that knows the financial and investment world quit...

John Savadjian is a principal of the Old Tappan Financial institute (LLC) and he is a man that knows the financial and investment world quit...