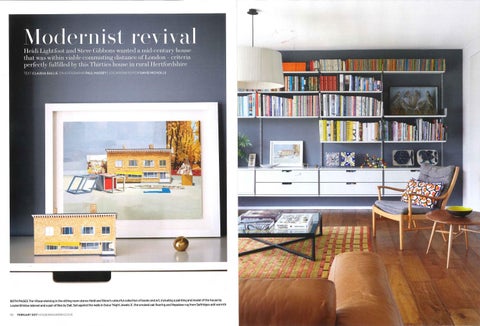 BOTH PAGES The Vitsoe shelving in the sitting room stores Heidi and Steve&#39;s colourful collection of books and art, including a painting and model of the house by Louise Bristow (above) and a pair of tiles by Dalf. Set against the walls in Du lux &#39;Night Jewels 3&#39;, the smoked oak flooring and Nepalese rug from Selfridges add warmth 90

uilt in 1936 by the renowned public sector architect Mary Medd, Sewell&#39;s Orchard was apparently unpopular with the locals at the time, who likened its monopitch roof and pared-back design to that of a canning factory. This is not a view shared by Heidi Lightfoot and Steve Gibbons, however, who have lived in and loved the daring modernist property for the past few years. Steve, who is head of user experience and design at the BBC, and Heidi, who owns a graphic-design agency, relocated from Queen&#39;s Park to Tewin in rural Hertfordshire with their two young sons- Riley, seven, and Jackson, four- in 2013. With exacting criteria that included modernist architectural style, a viable London commute and good schools locally, they had expected their search for a new home to be lengthy. But the estate agency TheÂˇModern House presented them with the ideal property almost straight away. &#39;The house ticked all the boxes,&#39; says Steve. &#39;I&#39;m a fan ofbrutalism, whereas Heidi veers towards Scandinavian style, so with its clean lines and warm bricks there was something for both of us. Most of all, it felt like a family home and that&#39;s what we were looking for.&#39; Though the bones were good, the property did need work, so the couple enlisted the help of architect John Pardey. It THIS PAGE CLOCKWISE FROM TOP LEFT An Arflex &#39;Naviglio&#39; sofa from SCP divides the seating and dining areas of the sitting room. The main dining room has a wall painted in Du lux &#39;Velvet Touch 1&#39;. One end of the adjoining drawing room. OPPOSITE The kitchen units were made by Kraftwork 92

Walls in teal, mustard and rey are l

love for the 1930 Stockholm Exhibition

was a canny choice: John had previously worked with Mary Medd&#39;s husband and fellow architect David, and was excited to take on the redesign. An annex had been added in the Seventies, as ;well as cqxridors and an extra front door, making the house feel a little warren-like. &#39;The aim was to open up the space and make it flow better,&#39; Steve explains. &#39;John persuaded us to be bold and had ideas that were really transformational.&#39; During two phases spread over 18 months, walls were taken down and layouts reworked to create light, airy spaces on the ground floor, and generous bedrooms and bathrooms upstairs. But although the restructure was quite drastic, both Heidi and Steve were keen to revive some of the Grade II-listed building&#39;s original character. This was a task made much simpler thanks to a wealth of papers belonging to the Medds, held at London&#39;s UCL Institute of Education. &#39;Our research led us to a folder full of notes and photographs showing what it looked like when it was built,&#39; says Heidi. &#39;Both of our neighbours, whose houses were part of the same project, have some elements remaining, so by using all of these references, we&#39;ve been able to add back in missing architectural details, including the storage next to the fireplace, the plinths and mini bricks in the hearth, and even door handles, which we had cast specially.&#39; The staircase&#39;s pinkish quarry tiles, previously carpeted over, have been carefully restored. &#39;We spent hours trawling the internet buying samples that didn&#39;t match, so in the end we patched up the remaining tiles and stained the filler with tea.&#39; Despite this keen attention to historical detail, the house remains thoroughly modern throughout. Smoked oak boards run the entire width of the ground floor, while clean-lined plywood units by cabinetmaker Kraftwork were designed to look more like furniture than standard kitchen storage. Walls in teal, mustard and grey are a nod to Mary Medd&#39;s love for the 1930 Stockholm Exhibition (one of her inspirations for the house) and are influenced by-5!olourful posters of the time. Rooms are furnished with Scandinavian and mid-century pieces, which Heidi and Steve were collecting before they met. Pieces sourced from dealers and furniture fairs - and even found in skips- include classic Knoll, Eames, Ercol and Hans Wegner furniture with some contemporary pieces by Hay and Donna Wilson thrown in for good measure. Artwork, including vintage Carry On posters, a Lucienne Day silk mosaic and work by Pink Floyd designer Storm Thorgerson, hangs on the walls, while in the sitting room the Vitsoe shelving is home to a vitrine of taxidermy birds, stuffed by Steve&#39;s great-great grandfather. &#39;I&#39;m the oldest grandchild so I was always set to inherit it,&#39; he says. &#39;It&#39;s quite cool in a weird way; we configured the shelves so that it would fit.&#39; Heidi and Steve are happy to admit that the idea of moving to such a quiet village did not initially come without reservations, but what they were in fact looking for was contrast. &#39;We love the buzz of London, and the beauty ofliving here is that the journey only takes a few more minutes than when we lived in Zone 2,&#39; says Heidi. &#39;But when we come back to the countryside, it&#39;s really a breath of fresh air&#39; D The Modern House: themodernhouse.com John Pardey Architects:johnpardeyarchitects.com OPPOSITE CLOCKWISE FROM TOP LEFT Vintage Star Wars figures are displayed in one of the boys&#39; bedrooms, which has a Hans J Wegner bed (top right). The main bedroom&#39;s en suite is clad in &#39;Marmoreal&#39; tiles by Max Lamb. A spare room. THIS PAGE Concrete furniture by Tina Rugelj sits in the garden

Article from the February 2017 edition of House & Garden Magazine on Mary Medd's Sewell's Orchard, which was recently refurbished and extended by jpa. http://www.johnpardeyarchitects.com/modern-architecture/one-off-houses-architecture/sewells-orchard/ 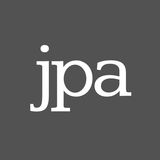