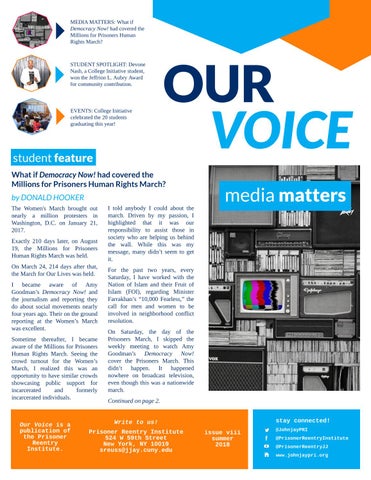 MEDIA MATTERS: What if Democracy Now! had covered the Millions for Prisoners Human Rights March?

W hat if Democracy Now! had covered t he Millions for Prisoners Human Right s March? by DONALD HOOKER The Women&#39;s March brought out nearly a million protesters in Washington, D.C. on January 21, 2017. Exactly 210 days later, on August 19, the Millions for Prisoners Human Rights March was held. On March 24, 214 days after that, the March for Our Lives was held. I became aware of Amy Goodman?s Democracy Now! and the journalism and reporting they do about social movements nearly four years ago. Their on the ground reporting at the Women?s March was excellent. Sometime thereafter, I became aware of the Millions for Prisoners Human Rights March. Seeing the crowd turnout for the Women?s March, I realized this was an opportunity to have similar crowds showcasing public support for incarcerated and formerly incarcerated individuals.

I told anybody I could about the march. Driven by my passion, I highlighted that it was our responsibility to assist those in society who are helping us behind the wall. While this was my message, many didn?t seem to get it. For the past two years, every Saturday, I have worked with the Nation of Islam and their Fruit of Islam (FOI), regarding Minister Farrakhan?s ?10,000 Fearless,? the call for men and women to be involved in neighborhood conflict resolution. On Saturday, the day of the Prisoners March, I skipped the weekly meeting to watch Amy Goodman?s Democracy Now! cover the Prisoners March. This didn?t happen. It happened nowhere on broadcast television, even though this was a nationwide march. Continued on page 2. st ay connect ed!

MEDIA MATTERS, continued On Saturday, August 12, 2017, in Charlottesville, Virginia, Heather Heyer was fatally killed in a hit and run during a protest rally of white nationalists. A week later, rallies were held across the country and covered in the national press and Democracy Now!

Longtime activists have seen the failures of the individuals with big ideas but poor managerial skills, or lack of staffing to support those ideas.

Oprah Winfrey and George Clooney gave the March for Our Lives organizers $500,000 donations each. It is not While our Millions for &quot; W e are living in as though our movement Prisoners Human Rights an age where doesn&#39;t have arts and March rallies were social movement s entertainment supporters nationwide, and are becoming and other philanthropists. multitudes of people did aware t hat participate, we did not support must be The family members of reach critical mass to 2.2 million int ersect ional &quot; the capture the public individuals incarcerated imagination. And why across America could was that? I list poor planning by the mobilize a formidable movement. national event organizers, poor We are living in an age where funding, and a lethargic, laissez faire social movements are becoming attitude by the incarcerated aware that support must be population in getting family intersectional. members involved.

student spot light At College Initiative&#39;s annual graduation celebration, Devone was awarded the Jeffrion L. Aubry Award, in recognition of his commitment to the community. The interview has been edited and condensed for clarity. What are the ways in which you&#39;ve been engaged in the community? That&#39;s just it! I just didn&#39;t see it -that was just my normal course of action, going throughout the day, helping my family, guys that I come across, the other students that I mentor. It was something natural that just came to me. What does mentor ing mean to you? With the guys coming out of prison, they may not know the ropes in the school system, how to maneuver the different services that the schools have. That&#39;s where I come in, because I was in the same position they are when I came home. Now I&#39;m showing [my mentees] what I did, how I

was able to be in school, keep my grades, work -- and not be in trouble. What do your mentor ing relationships look like? I keep in contact [with my mentee] at least every other week, but we often touch base a couple times a week. If there&#39;s something he needs or wants to know more about, he&#39;ll text me and I respond right away. Or I&#39;ll call just to check up on him and ask how it&#39;s going, wish him a good day. He does the same thing to me. To know there&#39;s somebody out there rooting for you, to know somebody cares about you, just a hello sometimes, it means a lot. Sometimes all people need is a good morning text! How did you feel when you found out you won the awar d? I was just so overwhelmed, because I really didn&#39;t look at [my community work] as anything but pushing through,

meet devone nash: student, Jeffrion L. Aubry Award winner, mentor showing someone that even though its tough or hard, you just have to get up each day and do it. You cannot give up no matter what you do. And that&#39;s how I live my life, I don&#39;t give up. [Winning the award] really felt good. My mother was [at the graduation], my best friend from high school was there. These people who were there and are still there, it makes me appreciate them even more. I believe in treating people the way you want to be treated, and giving out the energy you expect back. Why is community ser vice impor tant? I believe you reap what you sow! I don&#39;t want to dedicate my life to doing wrong things, I want to dedicate my life to doing positive things. And anytime I get the chance to do something positive, I really go to bat for it.

to read and wat ch

The Trump administration launched a &quot;zero tolerance&quot; policy on immigration this April. Shortly after, the administration began separating undocumented families crossing the US-Mexico border, prosecuting parents and placing over 2,300 children in government custody or foster care. No law or court ruling mandates family separations. After nationwide outrage and mass protests, the Trump administration signed an executive order halting the separation of children from their families, although the &quot;zero tolerance&quot; policy remains in place. At the time of writing more than 2,000 children, some under the age of five, are believed to still be separated from their families. The number of families facing separation as a result of the Trump administration&#39;s immigration policy has brought attention to the human rights violations perpetuated by the U.S. immigration system. Last fall, Trump&#39;s decision to end the Deferred Action for Childhood Arrivals (DACA) policy, which offered protections and work permits to undocumented children, sparked similar protests. As the family separation policy continues to play out in the courts and public imagination, activists and advocates are bringing communities together to raise awareness about the injustices occurring on the US-Mexico border.

Film recommendations: After Innocence, Dir. Jessica Sanders, Documentary Kids for Cash, Dir. Robert May, Drama Submit your book and film recommendations or review one of the books or movies above -- we&#39;ll publish your thoughts!

I like to write poems When there is nobody home I even write poems over the phone I write them when I&#39;m alone I switch the style, switch the tone Write them over when they&#39;re wrong Make them short, fat, skinny, long Make sure everyone&#39;s my own Just keep writing till it&#39;s full grown But nothing&#39;s set in stone So what&#39;s that about the phone? I write my own poems.

It just gives me more time to rhyme I need to at least give it a try To give it a sign When something&#39;s on my mind Like this rhyme Or was it I? Yeah, I was the guy Who can&#39;t tell a lie Don&#39;t as why Just give it a try Time for a new line Harmonious

event s Short film Unbecoming explores t hemes of just ice, family On May 15, College Initiative held the premiere screening of the short film Unbecoming, a short narrative film produced by the incarcerated community at Otisville Correctional Facility and high school students from the High School of Art and Design. Unbecoming tells the story of main character Troy Tubman, a young Assistant Defense Attorney committed to upholding what he believes to be the principles of justice. But Tubman begins to re-evaluate his perspective and career in the criminal justice system when he is forced to prosecute a family member arrested during a Black Lives Matter protest. The film delves into his psyche: how strong are his values and commitment to his

job, now that his sister, Tiffany Robinson, is on the other side? While incarcerated at Otisville Correctional Facility, Alejo Rodriguez, Stephen Smith, Sandy Ramirez, Chas Ransom, Dino Solarzano, and Chris Werner spent months collaborating to write the script for the film, with support from the Tribeca Film Institute, V. Bravo, and Jacky Gutierrez. Production began in May 2017 and was finalized by October of the same year. At the premiere, the writers said that Unbecoming is more than a short film: it&#39;s the story of communities coming together to work on a shared project.

On June 21, we celebrated the 20 College Initiative students who graduated this academic year, joining hundreds of other alumni in our community. This year?s graduates completed Bachelor?s and Associate?s degrees at 12 colleges across New York City and State. The theme of this year&#39;s celebration, &quot;In Their Words,&quot; paid tribute to the diversity and value of student voices and perspectives, and acknowledged the power every student holds to enact change in the world. As CI students move on to the next steps in their journeys, whether it&#39;s another degree with our support or a new career, we will continue to amplify their voices and serve as an alumni network and resource. Every year, CI presents awards to students in the community, the Victor Hassine Memorial Essay Prize and the Jeffrion L. Aubry Award, and recognizes one of our many community partners with the Champions of Justice Award. The Victor Hassine Memorial Essay Prize is granted to a CI student whose writing reflects a deep personal commitment to educating communities about criminal justice reform. This year&#39;s winner is Matthew Wilson. The Jeffrion L. Aubry Award is granted to a CI student who has demonstrated exemplary community involvement through engagement. This year&#39;s winner is Devone Nash. The Champions of Justice Award, awarded this year to the Legal Aid Society, is granted to a community-based organization that advocates for criminal justice reform and provides reentry support.

Where it comes from It maybe from the pain hidden inside of me But I know it&#39;s not something I did not see It maybe from the struggle I&#39;ve been through Maybe it&#39;s what the abuse of a child do If you see the hurt why not help If you&#39;ve listen to the screams why not tell If you know how I feel why not understand If you&#39;ve been in my shoes why not walk again If you feel I&#39;m out of reach why not give a hand I don&#39;t know where it comes from but here it is again-Pain

Congratulations to the graduates, their families, and to this year&#39;s award winners. Together, we will continue to grow and uplift the CI community.

Our Voice is a submissions-based newsletter published on a quarterly basis. We welcome submissions from anyone, about anything. Whether you&#39;re passionate about current events, have a strong opinion about a book you just read, want to share your perspectives and thoughts, or are a poet or creative writer -- we want to hear from you! Read the insert for more information about how to submit.