A Splendid Time - Photographs from The Fest for Beatles Fans 2019 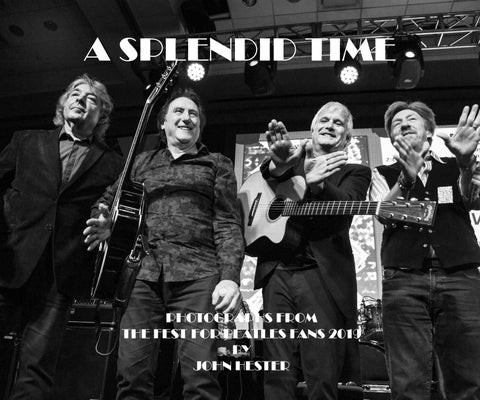 PHOTOGRAPHS FROM THE FEST FOR BEATLES FANS 2019 BY JOHN HESTER

Images in this book may not be copied or duplicated in any form, digital or print, without written permission from the photographer.

“...A Splendid Time is Guaranteed for All. And Tonight Mr. Kite is Topping the Bill...” Being for the Benefit of Mr. Kite Sgt. Pepper’s Lonely Hearts Club Band, 1967

John Hester is not employed by the Fest for Beatles Fans or Mark Lapidos Productions, nor does

he have any professional relationship with them. He has photographed the festival, and has published this book, as an independent photographer. He has not been commissioned by the Fest or by Mark Lapidos Productions for this or any other project, and this book is not an official publication of the Fest for Beatles Fans. John Hester does not claim to represent or speak for the Fest for Beatles Fans or Mark Lapidos Productons in any way. All of the photos presented in this book are the sole property of John Hester, and all rights are reserved. Any requests to use any of the photos in this book for any reason should be addressed to John Hester.

Introduction It was March of 1997 when I first made the trek out to Secaucus, New Jersey for the annual Fest for Beatles Fans. It was during that time that I was working as a staff photographer for a local weekly newspaper, yet despite this, i neglected to bring a camera to the festival. It wasn’t a matter of forgetting - I brought a camera nearly everywhere during that time - but with cameras being forbidden at most concerts in those years (before cellphones), I was worried that my camera would be confiscated if I were caught trying to fire off a shot or two. Even worse, I would be escorted to the door and banned forever. Imagine my surprise to see numerous festival-goers shooting off picture after picture from in front of the stage to the back of the house. And so, my first Beatle Fest, as it was known at the time, was unrecorded...at least by me. For years, I would be kicking myself for missing the opportunity to shoot the mini-Wings reunion, as well as every other guest at that year’s fest.

Determined not to let that happen again, I returned the following year with camera in hand, crouching in front of the stage to get the best vantage point. While I haven’t been to every Fest since then, I have been to many, always with my camera, to document those who played some part in the history of the Beatles, as a group and as solo performers. The Fest for Beatles Fans has allowed me to produce what I consider to be some of my best photographic work. Things came full circle for me in 2018 when, after contacting Mark and Carol Lapidos, the founders of The Fest, i was given the opportunity to exhibit my photographs of pasts Fests. It was a dream come true. Visitors to the Fest, and the guest speakers themselves, could see the work I had been creating for nearly two decades. In 2019, I was asked back to exhibit again to exhibit a new batch of images.

The 2019 Fest provided another opportunity to get some great shots of some very special guests. The Zombies appeared at The Fest literally a day after their introduction into the Rock and Roll Hall of Fame. And although I have photographed them numerous times over the years since my first cameraless Fest, I was able to photograph another mini-Wings reunion featuring the same musicians that I had failed to capture more than twenty years earlier. The photographs in this book donâ&amp;#x20AC;&amp;#x2122;t show The Fest for Beatles Fans in its entirety. It represents only one day of The Fest, and only a portion of that dayâ&amp;#x20AC;&amp;#x2122;s events. Still, I believe I have been able to capture much of the excitement of that day. As of this writing, the 2020 Fest for Beatles Fans has been postponed from its usual March date to October, due to the Coronavirus pandemic. Another change for me is the decision not to exhibit again this year. While I hope to show my work there again in the future, trying to man the exhibit while taking new photos of the special guests has proved to be a challenge. Choices have to be made, and for now at least, I feel the need to be crouched down right in front of the stage, capturing as much as I can.

It’s safe to say this book, and all of the photos witin it, would not exist without Mark and Carol Lapi-

dos. Mark founded Beatle Fest in 1974 after a chance meeting with John Lennon, who gave his consent and encouragement for this new venture. A couple of years later, he brought his new wife, Carol, into the picture, and together, they have kept this juggernaugt going every year since then, attracting thousands and thousands of excited Beatles fans from all over the world. At the Fest, Mark tends to be more “front of the house,” hosting the annual Beatles Auction and intruducing many of the featured speakers, while Carol keeps things running behind the scenes.

Ken Dashow is a legend in the New York City area. He has been one of the most popular radio

personalities on Q104 for many years, where he hosts the weekly â&amp;#x20AC;&amp;#x153;Breakfast with The Beatles.â&amp;#x20AC;? He has hosted The Fest for Beatles Fans in the NY Metro Area for a long time, where he conducts fascinating interviews with people from Beatles history.

Jack Douglas has had a long and distinguished career as a record producer, and before that as

a sound engineer. During his career, Jack has worked with some of the biggest names in the music business; Aerosmith, Blue Oyster Cult, Cheap Trick, and many others. Jack worked on what is guably his most notable project in late 1980, with John and Yoko. He was the producer for the legendary “Double Fantasy” and “Milk and Honey” albums. He appeared at the Fest to discuss his years in the music business, and his experiences working with John and Yoko.

Drummer Alan White is not only the longest-serving member of the legendary band Yes, he was

also a member of the Plastic Ono Band. In 1969, Alan received a call from John Lennon, asking him to take part in the band and perform at the Toronto Rock and Roll Revival. He would work with John and Yoko again on the classic Imagine album. Alan also worked with another Beatle, recording with George Harrison on his â&amp;#x20AC;&amp;#x153;All Things Must Passâ&amp;#x20AC;? album. He has also worked legends, including Ginger Baker and Steve Winwood. Alan spoke about his time working with the former Beatles as well as other stories from his long and successful career.

The Zombies made a very special appearance at the Fest, having been inducted into the Rock

and Roll Hall of Fame literally the night before. Original members Rod Argent, Colin Blunstone, Hugh Grundy and Chris White told stories from the bandâ&amp;#x20AC;&amp;#x2122;s heyday, including their early years, their hit songs, and recording one of their best-known albums, Odessey and Oracle. They were joined onstage by host Ken Dashow.

ABOVE: Chris White, oritinal bassist and vocalist for The Zombies OPPOSITE: Colin Blunstone tells a story to the crowd.

The festival included a reunion of three members of the last lineup of Paul McCartneyâ&amp;#x20AC;&amp;#x2122;s legendary band, Wings, Steve Holley, Laurence Juber, and Denny Laine. The three musicians, along with host Ken Dashow, shared stories of their days performing together as well as performing impromptu renditions of some of the groupâ&amp;#x20AC;&amp;#x2122;s biggest hits.

ABOVE: Steve Holley OPPOSITE: Laurence Juber 58

Needless to say, the fans make up a big part of the entire Fest for Beatles Fans experience. While

my focus is mainly on the features speakers, itâ&amp;#x20AC;&amp;#x2122;s always fun to step away from the main stage and catch a glimpse of fans out in the lobby playing music and just enjoying the festivities and the surroundings. The Fest also presents the Apple Stage, where bands have the opportunity to perform songs by The Beatles to a very appreciative crowd. I didnâ&amp;#x20AC;&amp;#x2122;t have as much time to visit these areas because of the responsibility of visiting my photo exhibit while simultaneously trying to capture images of the featured speakers, here is a brief glimpse of what fans experience while attending The Fest.

The crowd in the main ballroom, listening to a guest speaker on the main stage 76

After exhibiting my photos at the 2018 Fest, I was thrilled and honored to be asked by the organiz-

ers of The Fest to create a new exhibit of my work for the 2019 Fest, again held at the Hyatt Regency Hotel in Jersey City, New Jersey. Not wanting to repeat any of the photos I from my previous exhibit, I scoured the archives, spanning both the film and digital eras of photography, to find the best examples of my work. I was fortunate enough to have some very good material from the 2018 Fest, which was included in this yearâ&amp;#x20AC;&amp;#x2122;s exhibit, along with many favorites from the past.

A Splendid Time - Photographs from The Fest for Beatles Fans 2019