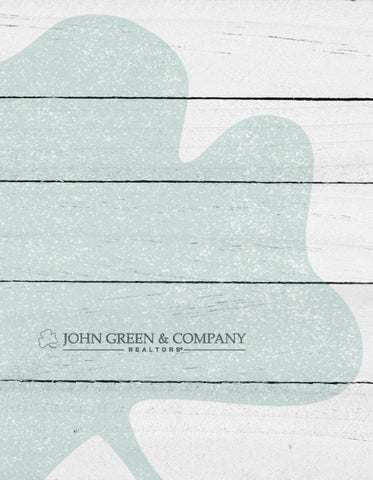 There is just something about the Collierville Square... the history resonating out of the brick buildings, the large, inviting oak trees shading walkways, the fans lazily spinning in the gazebo, the sound of a distant train, and, of course, the green and white sign for John Green & Company Realtors®.

John Green, his sons Allen and Michael, and their team, are a part of the fabric of Collierville. When John Green first came to Collierville in 1978 to purchase a Chevrolet from Fook’s, he fell in love with the town, and he saw its potential. “Poplar Avenue is the rainbow of Shelby County, and Collierville is the pot of gold at the end.” And so, John Green and Company was formed in 1979, with the hope that Collierville and the surrounding towns would grow to meet John’s expectations. Meet them they did. Collierville, Germantown, and the surrounding area has boomed in growth, and John Green & Company has been there every step of the way. When John’s son, Allen, joined the team in 1995, and other son, Michael, shortly after in 1998, John knew his legacy of community and tradition would live on. Today, almost 40 years after our doors first opened, the tradition lives on and is stronger than ever. A tradition of treating each new client as part of the family, of nurturing our community, and of choosing quality employees and treating them so well that some never leave, like office manager Jane Craig, who joined the team in 1980, or relocation diector Betty Clayton, who started in 1985, or advertising and purchasing director Sandra Howard, who joined in 1989. Our managment team boasts 200+ combined years of experience. You would be hard pressed to find a team with longer tenure anywhere in the Memphis area. This tradition of quality people, service, and results sets John Green & Company apart. We are your neighbors, and we are passionate about our town and its homes, land, and commercial space. The minute you step through our door, you are part of the family. Welcome to the neighborhood.

John Green rented one room from Pete Kosloski at 111 Center Street on the Town Square and started John Green & Co.

Our office moved to 116 North Main.

John Green purchased a Chevrolet from Fookâ&#x20AC;&#x2122;s Chevrolet in Collierville.

The office moved to 120 North Main and shared the space with John Masserano.

Our office moved to 110 North Main.

Our Office moved to 108 East Mulberry.

Allen and Michael take over ownership of the company.

John Green & Company is proud of its tradition of serving our community. We know that being a part of the fabric of the town means giving back, as often and as much as possible. This tradition of service started in the early years and has continued to this day.

When John and Marilyn Green first came to Collierville, John immediately saw its potential. He knew that by serving the community and helping it to grow he would find success. While growing up, John’s mother was a third grade teacher, and as fate would have it, he continued to be surrounded by educators. The Marilyn Barnes Green Endowment was named in memory of his wife, who spent 27 years teaching in the Shelby County Schools system. He then married Robbye who also dedicated most of her life to the teaching profession before retirement. John had a passion for learning and he knew that he could incorporate that interest into helping his town and business. John knew that by helping the local school system, he could follow his passion to serve and also attract new people to Collierville. In 1988, he started by recognizing the outstanding teachers within the school system with the “Annual Teacher Appreciation Luncheon.” In 1996 John also founded the Collierville Education Foundation, which combined the Teacher Appreciation Luncheon with Carrier Corporation’s small grants program. From there the Collierville Education Foundation

came to life. The foundation’s proceeds are used to award grants for the establishment of new programs, to purchase new technology and to improve current programs. “Education of our students and taking care of our wonderful teachers and our outstanding schools has always been a priority with John Green & Company Realtors®.” The Tradition hasn’t wavered as Allen & Michael have taken the reigns. To date, CEF has awarded over one million dollars to local public schools. Michael and Allen are also both involved throughout Collierville and the Memphis area. Michael served as chairman of the 2004 Collierville Chamber of Commerce, was chairman of the Multiple Listing Service Committee and is on the Collierville Education Foundation board. Allen served on the board of Main Street Collierville for nine years and served on the Board of Trustees for Briarcrest Christian Schools. Michael and Allen have both served on the board of directors for the Memphis Area Association of Realtors. “We are a local business and very knowledgable about the area,” Allen Green said. “We’ve been involved in our community, and that’s the one reason we’ve been able to be successful.” We at John Green & Company know that we owe our success and timeless results to our community. We stand proud of our contributions over the years and look forward to giving all we can in the future. Service is, to us, a tradition that will stand the test of time.

Our team of realtors is made up of individuals who are deeply rooted in our community. These men and women come from all over the Collierville, Germantown, Memphis, North Mississippi, and Fayette County areas, and know what it takes sell your home or business, find your dream home, or set you up in the perfect commercial space. Our team

cares for our customers, our community, and our future, as is reflected in their involvement in a growing number of civic and charitable organizations. They work tirelessly to meet your needs and to continue to make Collierville and the surrounding area a wonderful place to live. Call our office today to find your John Green & Company realtor.