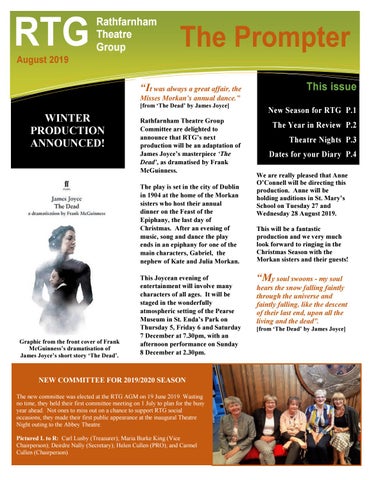 “It was always a great affair, the Misses Morkan’s annual dance.” [from ‘The Dead’ by James Joyce]

Rathfarnham Theatre Group Committee are delighted to announce that RTG’s next production will be an adaptation of James Joyce’s masterpiece ‘The Dead’, as dramatised by Frank McGuinness. The play is set in the city of Dublin in 1904 at the home of the Morkan sisters who host their annual dinner on the Feast of the Epiphany, the last day of Christmas. After an evening of music, song and dance the play ends in an epiphany for one of the main characters, Gabriel, the nephew of Kate and Julia Morkan.

Graphic from the front cover of Frank McGuinness’s dramatisation of James Joyce’s short story ‘The Dead’.

This Joycean evening of entertainment will involve many characters of all ages. It will be staged in the wonderfully atmospheric setting of the Pearse Museum in St. Enda’s Park on Thursday 5, Friday 6 and Saturday 7 December at 7.30pm, with an afternoon performance on Sunday 8 December at 2.30pm.

NEW COMMITTEE FOR 2019/2020 SEASON The new committee was elected at the RTG AGM on 19 June 2019. Wasting no time, they held their first committee meeting on 1 July to plan for the busy year ahead. Not ones to miss out on a chance to support RTG social occasions, they made their first public appearance at the inaugural Theatre Night outing to the Abbey Theatre. Pictured L to R: Carl Lusby (Treasurer); Maria Burke King (Vice Chairperson); Deirdre Nally (Secretary); Helen Cullen (PRO); and Carmel Cullen (Chairperson).

This issue New Season for RTG P.1 The Year in Review P.2 Theatre Nights P.3 Dates for your Diary P.4 We are really pleased that Anne O’Connell will be directing this production. Anne will be holding auditions in St. Mary’s School on Tuesday 27 and Wednesday 28 August 2019. This will be a fantastic production and we very much look forward to ringing in the Christmas Season with the Morkan sisters and their guests!

“My soul swoons - my soul

hears the snow falling faintly through the universe and faintly falling, like the descent of their last end, upon all the living and the dead”. [from ‘The Dead’ by James Joyce]

THE YEAR IN REVIEW What a year!

Another successful year for Rathfarnham Theatre Group! Looking back it’s hard to believe that so much happened. There were two major productions in The Mill Theatre: Plaza Suite, directed by Anne O’Connell and The Salvage Shop, directed by Carmel Cullen.

productions were two one acts in the Pearse Museum – Strawberry Jam, directed by Phil Fitzpatrick and Fred and Jane, directed by Maria Burke King. There was also plenty of scope

for both experienced and new members to get involved in productions - on stage and off.

As well as all this RTG ran weekly workshops over the Autumn and Spring seasons, including workshops on improvisation, character building, mime, the work of Sean

O’Casey, as well as readings of plays. The workshops proved

Maria for facilitating them. A tremendously busy and rewarding year – take a bow RTG!

Demi Geraghty (Dr. Varley) gives the thumbs up at the dress rehearsal for Strawberry Jam!

TWO PINTS and a packet of crisps please! Pictured at the inaugural outing to the Abbey Theatre’s production of Roddy Doyle’s play ‘TWO PINTS’ from L to R: Carl Lusby, Maria Burke King, Deirdre Nally, Carmel Cullen, Helen Cullen, Eamonn Cullen, Cass Guinan, and Columb Casey. Carmel Cullen came up with the brilliant idea of setting up a What’s App Group for members interested in going to the theatre. Members of the group can just send a What’s App message to the group saying they’ve booked to go to a play on a particular night. Anyone else in the group who’d also like to see the play can go ahead and book their own ticket

and then let the group know that they’re going along. So far there have been two Theatre Nights thanks to Cass who took the initiative and got us all off the starting blocks! The first was to see Roddy Doyle’s ‘Two Pints’ and the second was an excursion to Deirdre Kinahan’s ‘The Unmanageable Sisters’, both at the Abbey Theatre.

The Unmanageable Sisters at the Abbey!

COSTUME CLEARANCE! tj It’s not always about treading the boards and being in the limelight! As seasoned members will know there’s a huge amount of work going on behind the scenes of every theatre group – not least collecting, organising and storing costumes. Phil Fitzpatrick is our leading lady when it comes to costumes! Recently Phil asked for volunteers to help sort out the trove of costumes stored in our lock-up facility. Deirdre, Carl and Helen came along to give a dig out on a sweltering day in July. We managed to sort through all the costumes, bag up and label those that we thought would be used again, and packed up a number of bags for the recycling centre. A major catastrophe was averted when Phil recognised her own cardigan about to be thrown in the recycle bag by an over-enthusastic Helen!!

The Ladies Who Lunch!

DATES FOR YOUR DIARY 27 and 28 August 2019 Auditions for ‘The Dead’ will take place in St. Mary’s Boys School from 8pm to 10pm. This RTG production will be directed by Anne O’Connell. 4 September 2019 Rathfarnham Theatre Group Welcome Back Night will take place in St. Mary’s Boys School on Wednesday 4 September 2019 at 8pm. Carmel Cullen, Chairperson, will give an overview of the year ahead, Anne O’Connell will talk about the forthcoming production of ‘The Dead’, and Maria Burke King and Shirley Foley will facilitate two short workshops. After that we will adjourn to the Yellow House! All welcome! 11 September 2019 RTG Drama Workshops will recommence on Wednesday 11 September 2019. A full schedule of workshops will be announced at our Welcome Back Night on 4 September. 14 September 2019 Acting Workshop, part sponsored by the Drama League of Ireland and facilitated by Geoff O’Keeffe, will take place in the Pearse Museum, St. Enda’s Park from 10am to 4.00pm. This workshop will be open to RTG members as well as members of other drama groups. The cost of the workshop will be €10 per person. 3 October and 9 October 2019 ‘The Revolutionary and the Soldier’ - a play directed by Phil Fitzpatrick as part of the Dublin Festival of History, will take place in the Central Library on 3 October at 1pm, and in Walkinstown Library on 9 October at 6.45pm. The cast includes Claire Parkes, Noel Young and Sinéad Donovan. 24, 25 and 26 October 2019 ‘There’s Nothing On’ - a play directed by Maria Burke King as part of the Short and Sweet Theatre Festival, will take place in the Sean O’Casey Theatre, East Wall, on 24, 25 and 26 October 2019. 5, 6, 7 and 8 December 2019 ‘The Dead’ - RTG winter production, directed by Anne O’Connell, will take place in the Pearse Museum, St. Enda’s Park. There will be three evening performances on 5, 6 and 7 December at 7.30pm, and an afternoon performance on 8 December at 2.30pm. 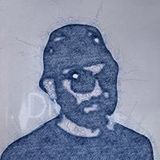