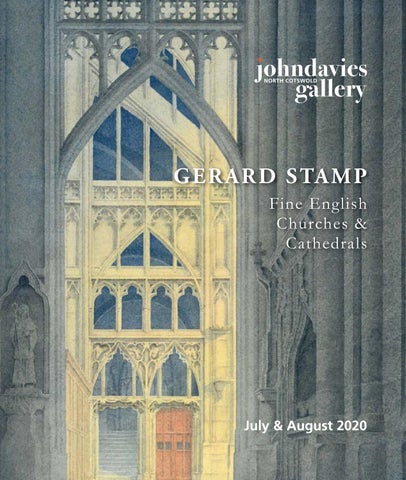 AN INTRODUCTION BY JOHN DAVIES I am delighted to be presenting this impressive collection of watercolours and oil paintings of Fine English Churches and Cathedrals by Gerard Stamp. A delightful, enthusiastic and open gentleman, he is an artist who has identified completely with his very individual subject – parish churches, abbeys, monasteries, priories, cathedrals and ecclesiastical ruins. As Gerard says below, he tries to capture ‘the feeling of a place’ and there is no doubt that he achieves results that truly invite contemplation. Viewing one of his paintings can be close to the experience of visiting an historic site and, for me, the process of putting this

catalogue together has heightened my appreciation of what an extraordinarily rich heritage our country possesses – the evolution of 16,000 parish churches and the amazing construction of 42 cathedrals, the earliest generally believed to be Canterbury in 597 AD, the most recent to be consecrated being Coventry in 1962, a span of 1,365 years. It is a great pleasure to be brought to a standstill by one of Gerard’s highly atmospheric paintings to dwell on the depth of our English history. John Davies, July 2020

GERARD STAMP IN HIS OWN WORDS I am often asked why I paint churches, and I have never found it an easy question to answer. I have certainly been fascinated by architecture - particularly medieval architecture – for as long as I remember. It started in my schooldays where a talent for drawing was nurtured and developed by an inspirational art master in a classroom overlooking one of Europe’s greatest Norman cathedrals, Norwich. I was surrounded by magnificent medieval architecture, and was also increasingly obsessed by one of our finest architectural draughtsmen, the Norwich artist John Sell Cotman. What I try to paint is the atmosphere, the feeling of a place. Above all, it is light which fascinates me, and how light can affect mood and can lead the eye around a painting. I am also attracted by the melancholy, the timelessness, the tranquillity of a simple country church, or the solemn ruins of a once great abbey. These are hardly new or ‘original’ subjects for an artist’s attention but that is no reason not to interpret them anew, with fresh eyes. But there is something else. John Ruskin wrote: “The greatest glory of a building is not in its stones, nor in its gold. Its glory is in its Age, and in that deep sense of voicefulness, of stern watching, of mysterious sympathy… even of approval or condemnation, which

we feel in walls that have long been washed by the passing waves of humanity... it is in that golden stain of time, that we are to look for the real light, and colour, and preciousness of architecture.” The idea that a structure made out of brick and stone can somehow impart ‘approval’ or ‘condemnation’ may be to the modern cynic at best unduly romantic and at worst utterly ridiculous. But it is this anthropomorphism, and the feeling of being able to touch the “passing waves of humanity”, which give spirit to these places and draws me to them. One art collector, quoting T.S Eliot, described my work as being ‘at the still point of the turning world’. I like that. We are living in an angry and uncertain world, and often a very frightening one. It is also a crowded world where, though there are wonderful exceptions, we endure much ugliness in art, in architecture, in urban planning, and in the relentless industrialisation of our rural landscape and seascape. Beauty is well overdue a revival. In a time of great change these buildings provide constancy for the soul and sanctuaries for the eyes: I paint them because they are beautiful.

AN APPRECIATION BY PETER TOLHURST In his novel The Spire, set in Salisbury Cathedral, William Golding refers to ‘the rich fabric of constant praise’ that fills the space inside the great medieval structure. While Gerard Stamp, by his own admission, is not religious in the conventional sense, there is at the heart of his work something of Golding’s reverence for the ‘secret language of the stones’. What Gerard allows us to see clearly in the quiet corners of our cathedrals and country churches is the skill of those craftsmen who raised such glorious structures and the effect of what Ruskin called ‘that golden stain of time.’ So where did it all begin, his fascination with ‘decay, romance and echoes in the wind’ that are all tangled up with Gerard’s love of Norfolk? The county is, according to John Betjeman, ‘one of the great architectural treasures of Europe because of its medieval country churches’ and it is here where Gerard grew up. School in the shadow of Norwich Cathedral was where he learned the visual language of Romanesque and Gothic architecture and where, in the art room above the entrance into the Close, he discovered a passion for drawing and painting. Cycling to remote churches on the North Downs was, for me, a form of escape from the long shadow cast by Canterbury Cathedral and it was a prospect of churches that drew me to Suffolk in the late ‘60s. Not surprisingly our paths less trodden eventually converged when I met Gerard in 2005 at his first solo exhibition in Norwich. At the Grapevine Gallery he emerged with all the confidence of a fully-fledged artist, an artist at ease in the great tradition of English watercolour painting.

The work of Thomas Girtin and J M W Turner who began exploring the romantic possibilities of monastic ruins in the late 18th century were early influences but among the ‘distant footsteps’ Gerard set out to follow, those of the Norfolk artist John Sell Cotman had a particular resonance. At the behest of his patron Dawson Turner, Cotman had embarked on a punishing schedule of sketching tours across the county. The haul of some 400 etchings, published in his monumental Architectural Antiquities of Norfolk (1818) reveal the brilliance of his draughtsmanship. Gerard knew well

the work of this kindred spirit, absorbing Cotman’s ability to fix his gaze on some arresting detail. In this exhibition ‘Hales North Door’ and ‘Chancel windows, Kedington’ acknowledge Cotman’s abiding influence, one that challenges each new generation of artists to interpret ‘that golden stain of time’. It was John Piper, through his love of parish churches, who became Cotman’s greatest advocate. Ruskin’s Seven Lamps of Architecture had persuaded him to turn from Abstraction in the late ‘30s and, declaring himself passionately in favour of ‘Pleasing Decay’, he went on to paint more crumbling ruins in Norfolk than anywhere else. This ‘visibility of mutilation’ spoke directly to a young Gerard Stamp and helped shape his own aesthetic sensibility. The publication in 1952 of English Parish Churches with a selection of evocative

monochrome plates by the photographer Edwin Smith proved to be another landmark on Gerard’s journey ‘across a landscape of monuments and ruins’ that have led to a series of acclaimed exhibitions in cathedral cities throughout the country. The creative spark that connects Cotman, Piper and Stamp is most evident at Covehithe on the Suffolk coast. Here, where the cliff line is receding at an alarming rate, the windswept shell of St Andrew’s church awaits its fate. In a sheltered corner of the churchyard and in the clear light of a seaboard sky each artist, in turn, painted the kind of hauntingly beautiful ruin that has inspired others down the years. Peter Tolhurst Norwich 2020

Peter Tolhurst is an East Anglian author with a number of titles to his name including East Anglia: A Literary Pilgrimage, three volumes of East Anglian short stories, Knowing Your Place - a collection of essays on the region’s landscape and literature, as well as Virginia Woolf’s English Hours, the author’s acclaimed three volume Norfolk Parish Treasures. More recently his This Hollow Land: Aspects of Norfolk Folklore has been followed by the Brilliant Beacons: Portraits of East Anglian Churches which is profusely illustrated with a wonderful range of paintings by such artists as Edward Bawden, John Constable, John Sell Cotman, John Piper, Edward Seago, J.M.W. Turner as well as Gerard Stamp.

In this catalogue, with the exception of Norwich Cathedral from the playing fields and Worcester Cloister, the Church and Cathedral subjects are illustrated in alphabetical order.