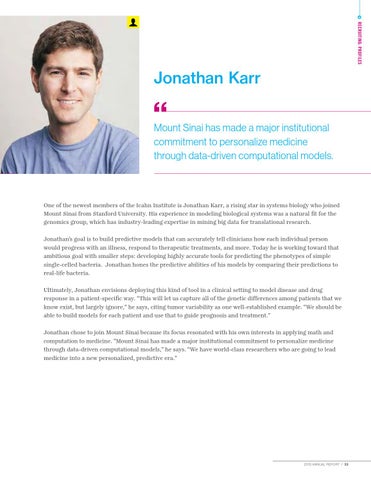 One of the newest members of the Icahn Institute is Jonathan Karr, a rising star in systems biology who joined Mount Sinai from Stanford University. His experience in modeling biological systems was a natural fit for the genomics group, which has industry-leading expertise in mining big data for translational research. Jonathan’s goal is to build predictive models that can accurately tell clinicians how each individual person would progress with an illness, respond to therapeutic treatments, and more. Today he is working toward that ambitious goal with smaller steps: developing highly accurate tools for predicting the phenotypes of simple single-celled bacteria. Jonathan hones the predictive abilities of his models by comparing their predictions to real-life bacteria.   Ultimately, Jonathan envisions deploying this kind of tool in a clinical setting to model disease and drug response in a patient-specific way. “This will let us capture all of the genetic differences among patients that we know exist, but largely ignore,” he says, citing tumor variability as one well-established example. “We should be able to build models for each patient and use that to guide prognosis and treatment.”   Jonathan chose to join Mount Sinai because its focus resonated with his own interests in applying math and computation to medicine. “Mount Sinai has made a major institutional commitment to personalize medicine through data-driven computational models,” he says. “We have world-class researchers who are going to lead medicine into a new personalized, predictive era.” 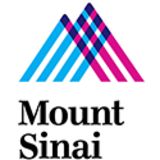