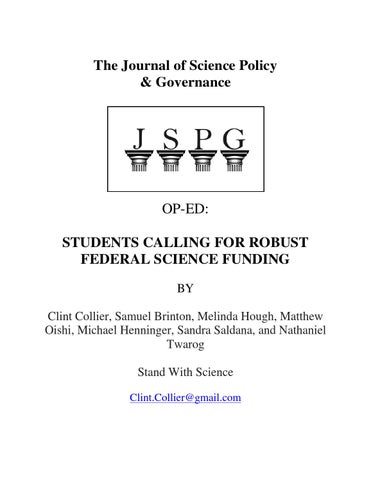 There is a national conversation about science taking place today that will largely determine the availability of research opportunities that many of us hope to undertake as graduate students. It is one that will require a strong, unified student voice to influence. It all has to do with one word: “sequestration”. On March 1st, Congress failed to avert sequestration, which immediately enacted government-wide spending cuts including all 2013 federally funded research and development (R&D) budgets. We are already beginning to feel the effects of these drastic measures.

The sequestration is the result of the 2011 Congressional ‘Supercommittee’s’ failure to compromise on deficit reduction strategies. The Budget Control Act of 2011 established cuts of $1 trillion over 10 years from federal spending, including R&D appropriations, beginning in 2013. This impacts all scientists, in all disciplines, across the entire country. Sequestration is leading to budget shortfalls in all 24 federal departments that fund research in America including the National Institutes of Health, where according to the Office of Extramural Research, some grants are being funded at less than 90% of request; the National Science Foundation, which expects to award 1000 fewer grants during this year’s funding cycle; the Department of Energy, where national laboratory employees face lengthy furloughs; and the Department of Defense.

Now that sequestration has taken place, both political parties have renewed their attempts to replace it in the fiscal year 2014 deliberations. However, the debate about where to cut, even in the absence of sequestration, rages on. Congress does not realize that the dramatic cuts to national research budgets will have serious effects on every graduate science and engineering program in the country. If Congress limits the only major source of basic science funding in the

United States, the budgets of graduate programs at American universities everywhere will stagnate, and substantially limit opportunities for students to pursue advanced degrees in STEM fields. As graduate science students who understand the vital importance of R&D funding to both our individual futures and to our countryâ&#x20AC;&#x2122;s innovative potential, we must advocate to reverse these across-the-board cuts to science funding immediately. Congress must find a balanced, bipartisan approach to deficit reduction that objectively considers the importance of federal science funding to Americaâ&#x20AC;&#x2122;s future.

According to the American Association for the Advancement of Science (AAAS), adjusting for inflation, federal funding for basic research has declined by 10% since 2010. To make matters worse, AAAS calculates that sequestration will reduce funding for R&D by nearly $60 billion through 2017. These cuts to research are narrowing the pipeline of future researchers and placing many already struggling research labs under greater stress. The resulting decrease in scientific talent and discovery will negatively impact our economy. There is a direct relationship between R&D, technological innovation, and economic growth. A study released in September by the Information Technology and Innovation Foundation (ITIF) projected that a decline in R&D investment of the magnitude outlined in the sequester will reduce GDP by $203 billion in the short term and up to $860 billion over the timeline of the sequester. According to the report, the short-term R&D loss is the economic equivalent to eliminating all sales of new motor vehicles for half of a year. This unprecedented cut in federal research investment will have a huge impact on the workforce with ITIF estimating cumulative job losses and forgone job creation of approximately 450,000 from 2013â&#x20AC;&#x201C;2016.

While there has been a push on Capitol Hill to protect non-defense discretionary spending, which includes federal agencies like NIH and NSF, protecting science funding is not a defense versus non-defense argument, as some politicians and advocates make it out to be. To protect science we must advocate to shield funding in all sectors of governmental R&D spending. The role of defense funding for science should not be overlooked. Under President Obamaâ&#x20AC;&#x2122;s FY2013 budget, the Department of Defense would receive approximately 50.6% of his total request for R&D; the Pentagon spends about 12% of its budget, or $81.4 billion, on R&D. Significant achievements, garnered by either direct or indirect defense spending, include the internet, jet engines, satellite navigation, compact discs, and laser eye surgery. We as graduate students must be concerned about cuts to all science funding, as all cuts to science are cuts to our future livelihoods as much as they are cuts to our nationâ&#x20AC;&#x2122;s competitiveness.

To combat sequestration and its significant effects, students from across the country are uniting under a newly formed organization known as Stand With Science (standwithscience.org). By providing a dedicated and accessible cadre of student advocates, by leading national science advocacy campaigns to Congress, and by creating monthly advocacy action items for students to participate in, the goal of Stand With Science is to give graduate and professional students who care about science and engineering, the knowledge, tools, and encouragement they need to become advocates for societyâ&#x20AC;&#x2122;s investment in innovation. We believe the role of the scientist should not be limited to the laboratory, and that graduate students have a responsibility to contribute to important policy debates concerning science and science funding.

Thanks to the overwhelming success of the original Stand With Science 2011 Letter to Congress, our student movement is in a unique position to affect future research funding and improve career prospects for the next generation of innovators. Over 10,000 graduate students have added their names to the Stand With Science project, laying the initial groundwork for our initiative to represent students in the halls of Congress. These students come from diverse backgrounds but each share the common goal of addressing science funding challenges and combating policies which threaten American science.

The path to a better future for science in America is not going to be easy. Funding for federal research and development is going to be scrutinized and conversations on its costs and benefits will echo across the country. We call on Americaâ&#x20AC;&#x2122;s science students to help us remind Congress that the benefits of science to the public-at-large and to the economy of these United States are significant. We are the future doctors who may discover cures for cancer, future engineers who may send us to Mars, and future scientists who may bring clean energy to the world. But we cannot do it without the support of our lawmakers. These careers, and the economic benefits they bring to our country, are dependent on federal support of R&D.