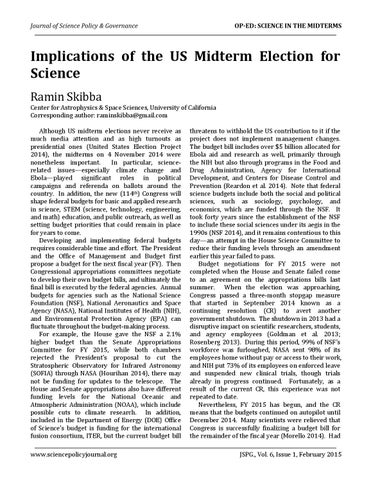 OP-ED: SCIENCE IN THE MIDTERMS

Implications of the US Midterm Election for Science Ramin Skibba Center for Astrophysics & Space Sciences, University of California Corresponding author: raminskibba@gmail.com Although US midterm elections never receive as much media attention and as high turnouts as presidential ones (United States Election Project 2014), the midterms on 4 November 2014 were nonetheless important. In particular, sciencerelated issues—especially climate change and Ebola—played significant roles in political campaigns and referenda on ballots around the country. In addition, the new (114th) Congress will shape federal budgets for basic and applied research in science, STEM (science, technology, engineering, and math) education, and public outreach, as well as setting budget priorities that could remain in place for years to come. Developing and implementing federal budgets requires considerable time and effort. The President and the Office of Management and Budget first propose a budget for the next fiscal year (FY). Then Congressional appropriations committees negotiate to develop their own budget bills, and ultimately the final bill is executed by the federal agencies. Annual budgets for agencies such as the National Science Foundation (NSF), National Aeronautics and Space Agency (NASA), National Institutes of Health (NIH), and Environmental Protection Agency (EPA) can fluctuate throughout the budget-making process. For example, the House gave the NSF a 2.1% higher budget than the Senate Appropriations Committee for FY 2015, while both chambers rejected the President’s proposal to cut the Stratospheric Observatory for Infrared Astronomy (SOFIA) through NASA (Hourihan 2014), there may not be funding for updates to the telescope. The House and Senate appropriations also have different funding levels for the National Oceanic and Atmospheric Administration (NOAA), which include possible cuts to climate research. In addition, included in the Department of Energy (DOE) Office of Science’s budget is funding for the international fusion consortium, ITER, but the current budget bill www.sciencepolicyjournal.org

threatens to withhold the US contribution to it if the project does not implement management changes. The budget bill includes over $5 billion allocated for Ebola aid and research as well, primarily through the NIH but also through programs in the Food and Drug Administration, Agency for International Development, and Centers for Disease Control and Prevention (Reardon et al. 2014). Note that federal science budgets include both the social and political sciences, such as sociology, psychology, and economics, which are funded through the NSF. It took forty years since the establishment of the NSF to include these social sciences under its aegis in the 1990s (NSF 2014), and it remains contentious to this day—an attempt in the House Science Committee to reduce their funding levels through an amendment earlier this year failed to pass. Budget negotiations for FY 2015 were not completed when the House and Senate failed come to an agreement on the appropriations bills last summer. When the election was approaching, Congress passed a three-month stopgap measure that started in September 2014 known as a continuing resolution (CR) to avert another government shutdown. The shutdown in 2013 had a disruptive impact on scientific researchers, students, and agency employees (Goldman et al. 2013; Rosenberg 2013). During this period, 99% of NSF’s workforce was furloughed, NASA sent 98% of its employees home without pay or access to their work, and NIH put 73% of its employees on enforced leave and suspended new clinical trials, though trials already in progress continued. Fortunately, as a result of the current CR, this experience was not repeated to date. Nevertheless, FY 2015 has begun, and the CR means that the budgets continued on autopilot until December 2014. Many scientists were relieved that Congress is successfully finalizing a budget bill for the remainder of the fiscal year (Morello 2014). Had JSPG., Vol. 6, Issue 1, February 2015

Journal of Science Policy & Governance a budget not been passed and had CRs continued, agencies would continue to fund their programs at FY 2014 levels, which means “sequestration” spending reductions from the Budget Control Act (BCA) of 2011 would remain in place. If Congress does not make an agreement to reduce or remove these budget constraints, discretionary spending will return to sequester levels in FY 2016 and will remain there for the rest of the decade, meaning continued challenges for investment in science and technology. On the other hand, mandatory spending, which includes Social Security, Medicare, and Medicaid, will continue to grow relative to the discretionary budget (CBO 2014) because of growing healthcare costs, expanding beneficiaries, an ageing population, and insufficient revenues. Therefore, future budget negotiations will become even more difficult to resolve. STEM education and public outreach will be affected by the post-election Congress’s priorities as well. At the end of July 2014, Sen. J. Rockefeller (DWV) introduced the America COMPETES Reauthorization Act. According to the Association of American Universities, the bill calls for “robust but sustainable funding increases for the [NSF] and National Institute for Standards and Technology” (NIST), and it supports each agency’s effort to improve education of future STEM professionals. However, support for the bill has not been sufficiently bipartisan to reauthorize it yet. Depending on the post-election environment in 2015, the Higher Education Act (HEA) reauthorization, introduced by Sen. T. Harkin (D-IA) with more bipartisan support, is more likely to pass. Passage of the HEA is relevant given that it governs federal student aid and at least 70% of US university graduates are burdened with debt (TICAS 2013). The bill would provide some relief for students by increasing state contributions to public universities and thereby reducing tuition fees, supporting community colleges, and expanding programs that allow high school students to earn college credits. In addition to these science research and education issues, science policy is also relevant in many midterm election campaigns and ballot measures. Climate change, energy and environment policies are the most prominent science policy issues and played a big role in campaign ads (Davenport & Parker 2014). With increased flooding in the

OP-ED: SCIENCE IN THE MIDTERMS eastern US and the ongoing drought and wildfire conditions in the southwest—motivating a $7.5 billion water bond in California—global warming concerns many voters. However, a partisan divide persists, depending how poll questions are framed (Motel 2014). Hydraulic fracturing (“fracking”) and the Keystone XL pipeline remain controversial as well, and anti-fracking measures were nearly included on ballots in Colorado and Michigan. In addition, in another science policy issue, voters in Colorado and Oregon rejected the labeling of foods containing genetically modified crops (GMOs). Moreover, climate change was a major campaign issue in the race between Rep. Scott Peters (D-CA), and Carl DeMaio in San Diego County. This tossup race gained national attention, and though both candidates acknowledge the science behind climate change, DeMaio has stated that more research is needed. Peters won by a narrow margin after mailin and provisional ballots were counted. Importantly, Peters serves on the House Science Committee, and committee members Alan Grayson (D-FA) and Ami Bera (D-CA) won in close races as well, such that the committee will continue to have voices advocating for action on climate change. Nonetheless, climate change skeptics won the election between Sen. Mark Udall (D-CO) and Rep. Cory Gardner and the one between Gov. Rick Scott (R-FA) and Charlie Crist. The Senate’s science and commerce committee, however, likely will continue its history of bipartisanship when Sen. John Thune (R-SD) takes over from Sen. Jay Rockefeller (D-WV) (Mervis & Malakoff 2014). In any case, science policy issues were clearly important in this election, which will have important implications for investment in science research, education, and outreach. Democrats, Independents, and Republicans will have to work together to pass budgets supportive of science and to amend spending caps from the BCA. Newly elected politicians should avoid trying to win points by attacking federal agencies such as the EPA and its Clean Power Plan (Rosenberg 2014; Lehmann et al. 2014). In the meantime, scientists and their organizations should continue to communicate with policy-makers, journalists, and the public about the critical importance of their work and about ongoing challenges such as those of climate change and Ebola.

Author Biography Ramin Skibba is a research scientist at the Center for Astrophysics & Space Sciences at the University of California, San Diego. His work website is http://cass.ucsd.edu/~rskibba/, and he writes about science policy and astronomy news at his blog (http://raminskibba.net).