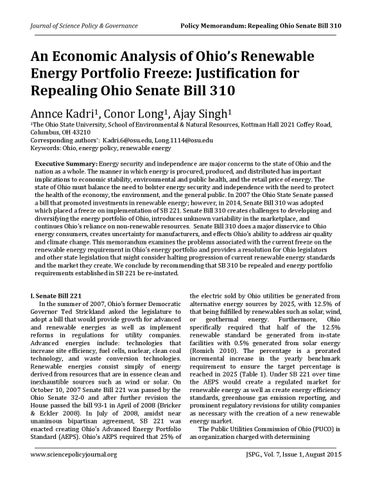 Ohio State University, School of Environmental & Natural Resources, Kottman Hall 2021 Coffey Road, Columbus, OH 43210 Corresponding authors*: Kadri.6@osu.edu, Long.1114@osu.edu Keywords: Ohio, energy policy, renewable energy Executive Summary: Energy security and independence are major concerns to the state of Ohio and the nation as a whole. The manner in which energy is procured, produced, and distributed has important implications to economic stability, environmental and public health, and the retail price of energy. The state of Ohio must balance the need to bolster energy security and independence with the need to protect the health of the economy, the environment, and the general public. In 2007 the Ohio State Senate passed a bill that promoted investments in renewable energy; however, in 2014, Senate Bill 310 was adopted which placed a freeze on implementation of SB 221. Senate Bill 310 creates challenges to developing and diversifying the energy portfolio of Ohio, introduces unknown variability in the marketplace, and continues Ohio’s reliance on non-renewable resources. Senate Bill 310 does a major disservice to Ohio energy consumers, creates uncertainty for manufacturers, and effects Ohio’s ability to address air quality and climate change. This memorandum examines the problems associated with the current freeze on the renewable energy requirement in Ohio’s energy portfolio and provides a resolution for Ohio legislators and other state legislation that might consider halting progression of current renewable energy standards and the market they create. We conclude by recommending that SB 310 be repealed and energy portfolio requirements established in SB 221 be re-instated. I. Senate Bill 221 In the summer of 2007, Ohio’s former Democratic Governor Ted Strickland asked the legislature to adopt a bill that would provide growth for advanced and renewable energies as well as implement reforms in regulations for utility companies. Advanced energies include: technologies that increase site efficiency, fuel cells, nuclear, clean coal technology, and waste conversion technologies. Renewable energies consist simply of energy derived from resources that are in essence clean and inexhaustible sources such as wind or solar. On October 10, 2007 Senate Bill 221 was passed by the Ohio Senate 32-0 and after further revision the House passed the bill 93-1 in April of 2008 (Bricker & Eckler 2008). In July of 2008, amidst near unanimous bipartisan agreement, SB 221 was enacted creating Ohio’s Advanced Energy Portfolio Standard (AEPS). Ohio’s AEPS required that 25% of www.sciencepolicyjournal.org

the electric sold by Ohio utilities be generated from alternative energy sources by 2025, with 12.5% of that being fulfilled by renewables such as solar, wind, or geothermal energy. Furthermore, Ohio specifically required that half of the 12.5% renewable standard be generated from in-state facilities with 0.5% generated from solar energy (Romich 2010). The percentage is a prorated incremental increase in the yearly benchmark requirement to ensure the target percentage is reached in 2025 (Table 1). Under SB 221 over time the AEPS would create a regulated market for renewable energy as well as create energy efficiency standards, greenhouse gas emission reporting, and prominent regulatory revisions for utility companies as necessary with the creation of a new renewable energy market. The Public Utilities Commission of Ohio (PUCO) is an organization charged with determining JSPG., Vol. 7, Issue 1, August 2015