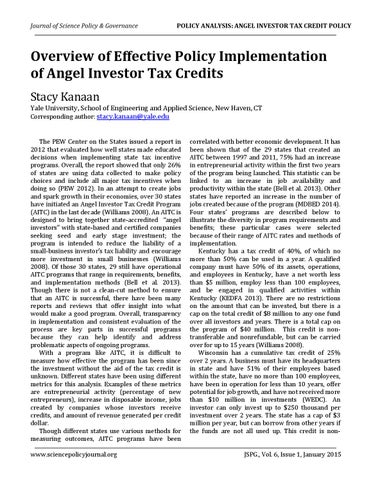 Overview of Effective Policy Implementation of Angel Investor Tax Credits Stacy Kanaan Yale University, School of Engineering and Applied Science, New Haven, CT Corresponding author: stacy.kanaan@yale.edu The PEW Center on the States issued a report in 2012 that evaluated how well states made educated decisions when implementing state tax incentive programs. Overall, the report showed that only 26% of states are using data collected to make policy choices and include all major tax incentives when doing so (PEW 2012). In an attempt to create jobs and spark growth in their economies, over 30 states have initiated an Angel Investor Tax Credit Program (AITC) in the last decade (Williams 2008). An AITC is designed to bring together state-accredited “angel investors” with state-based and certified companies seeking seed and early stage investment; the program is intended to reduce the liability of a small-business investor’s tax liability and encourage more investment in small businesses (Williams 2008). Of those 30 states, 29 still have operational AITC programs that range in requirements, benefits, and implementation methods (Bell et al. 2013). Though there is not a clean-cut method to ensure that an AITC is successful, there have been many reports and reviews that offer insight into what would make a good program. Overall, transparency in implementation and consistent evaluation of the process are key parts in successful programs because they can help identify and address problematic aspects of ongoing programs. With a program like AITC, it is difficult to measure how effective the program has been since the investment without the aid of the tax credit is unknown. Different states have been using different metrics for this analysis. Examples of these metrics are entrepreneurial activity (percentage of new entrepreneurs), increase in disposable income, jobs created by companies whose investors receive credits, and amount of revenue generated per credit dollar. Though different states use various methods for measuring outcomes, AITC programs have been www.sciencepolicyjournal.org

correlated with better economic development. It has been shown that of the 29 states that created an AITC between 1997 and 2011, 75% had an increase in entrepreneurial activity within the first two years of the program being launched. This statistic can be linked to an increase in job availability and productivity within the state (Bell et al. 2013). Other states have reported an increase in the number of jobs created because of the program (MDBED 2014). Four states’ programs are described below to illustrate the diversity in program requirements and benefits; these particular cases were selected because of their range of AITC rates and methods of implementation. Kentucky has a tax credit of 40%, of which no more than 50% can be used in a year. A qualified company must have 50% of its assets, operations, and employees in Kentucky, have a net worth less than $5 million, employ less than 100 employees, and be engaged in qualified activities within Kentucky (KEDFA 2013). There are no restrictions on the amount that can be invested, but there is a cap on the total credit of $8 million to any one fund over all investors and years. There is a total cap on the program of $40 million. This credit is nontransferable and nonrefundable, but can be carried over for up to 15 years (Williams 2008). Wisconsin has a cumulative tax credit of 25% over 2 years. A business must have its headquarters in state and have 51% of their employees based within the state, have no more than 100 employees, have been in operation for less than 10 years, offer potential for job growth, and have not received more than $10 million in investments (WEDC). An investor can only invest up to $250 thousand per investment over 2 years. The state has a cap of $3 million per year, but can borrow from other years if the funds are not all used up. This credit is nonJSPG., Vol. 6, Issue 1, January 2015

transferable and nonrefundable, but can be carried over for up to 15 years (Williams 2008). In 2009, Hawaii amended their AITC to have an 80% tax credit of total tax liability for the year with no carryover. This amendment changed the total allowed credit from a cumulative 100% over 5 years to an annual 80%, but was the still the largest tax credit of any state. For a company to qualify, they must have an office or own capital or properties in Hawaii and have more than 50% of their total activity come from qualified research of which the majority should take place in Hawaii. An investor can have up to $2 million dollars per business to qualify for this credit. The credit had no cap and was nonrefundable, but was able to be transferred between investors on a 2-1 basis (SHOA 2012). These states have some differences in requirements from the AITC in Connecticut, which offers an annual tax credit of 25%. In order for a business to qualify for the program, it must have less than $1 million in revenue, have less than 25 employees of whom 75% must reside in Connecticut, have operated in Connecticut for less than 7 continuous years, and have received less than $2 million in eligible angel investors (CI 2014). Qualifying investments can be made in the range of $25 thousand to $1 million (Rappa 2010). There is a cap of $3 million in credit for the program for the fiscal year of 2014. Credits can be carried over for up to 5 years. Though there are different methods in measuring the success of the programs, the general method in which the program is implemented should be consistent across the states. Many different reports have published recommendations on how to implement and maintain an effective tax incentive policy containing common concepts and principles. Listed below are key recommendations on what policy makers should take into account when developing a policy like AITC, which were compiled from multiple sources (PEW 2012, SHOA 2012, GFOA 2008, Oshlo et al. 2009). • Setting clear goals and objectives: concisely defining what industries this tax incentive is

targeting and how the success of this incentive will be measured.

• Setting limitations: limiting transferability and refundability of the credit will allow for less abuse of the incentive. • Making informed policy decisions: creating an evaluation process that can include all current state tax incentives in order to derive whether a program is working compared to others and what might need to be changed to make it more effective. For this to be successful, transparency in the method with which data are collected and stored is crucial to draw clear conclusions. • Measuring an economic impact: analyzing indicators that are directly affected by this incentive (i.e. jobs created, return on investment, etc.) and how these contribute to performance standards set when the policy was created. • Forming a monitoring entity: creating a panel or taskforce that focuses on this incentive will provide for an effective system that can focus solely on the AITC and foster community relations. • Monitoring incentive: creating a cap for the total amount to spend and setting a sunsetting timeline will force states to reevaluate the incentive. Even though states vary in their strategies and have different requirements, the policy mechanism by means of which an AITC is implemented is critical in shaping a successful program. Through deliberate monitoring, feedback, and evaluation, decision makers will be able to make changes to the program in order to stimulate the economic growth that they are looking for. While no one particular state has optimized its system, it is important to share information and learn from each state’s best practices in working toward improved economic conditions at local, state, and national levels.

Stacy Kanaan Stacy Kanaan is a Ph.D. candidate in chemical engineering at Yale University. She received her B.S. in chemical engineering from Oregon State University. Her dissertation focuses on the synthesis and separation single-walled carbon nanotubes. At Yale, she is an Advanced Graduate Leadership Fellow in Policy and Government Relations. Her internship at the Office of Federal Relations at Yale is what sparked her interest in science policy and advising. Acknowledgements This research was possible with the support of the Advanced Graduate Leadership Program at Yale University and with the advising of Richard Jacob.