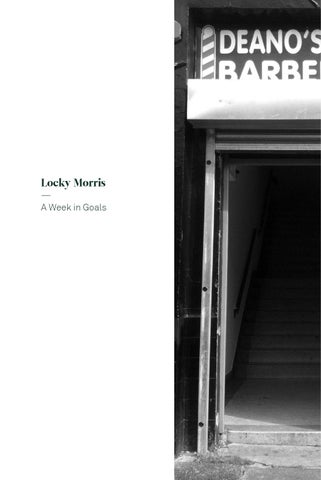 Who made you the centre of the universe? Declan Sheehan

The artist Locky Morris, in a space next to Deano’s

Regardless of his substantial and international record

as a contemporary artist exhibiting in Berlin, London, New York, Locky Morris is still rightly known as a ‘local artist’ in Creggan. So for his show here in Creggan—where we know ‘where he comes from’, his background, his context— this recognition gives us an almost familial attachment to his work. And this sense of recognition or identification is made even more apparent for us because Locky Morris is an artist whose ‘everyday’ life is commonly the ‘matter’ or ‘material’ of his art, and we know from within our own lives the ‘stuff’ of everyday life that surrounds and grounds his work and is transformed within it. There is the encounter

as son et lumiere through the repeated journey, at once both intimate and public, of the same ‘school run’ drive repeated across a seven year gap for a first and second daughter Take Two; the display as museological artefact of school uniform detritus from that iconic familial memory of the first day of school From Day One; or the transition to gallery object of an episode of deflated anticipation in the image of a holiday visit to Michelangelo’s home (closed for refurbishment) in Italy Michelangelo’s House (in progress).

With all this in place then, we can commit to looking

at his exhibition in Creggan, anticipating a sense of recognition and identification, and with the pleasures of seeing everyday events and those kind of random— everyday moments of the chance connections of things, all modified, heightened and transformed with the artist’s wit into ‘daily epiphanies’—to use the artist’s own phrase— that spark moments of reflection and that open up for us different ways of seeing the world.

But as well as this response, there are probably

endless responses to the artist’s exhibition that could be made.

What if, for example, we are actively repositioned with

regard to our responses to the art of Locky Morris?

What if we do not foreground the moments of epiphany

within those familial or everyday contexts which we may recognise?

What if we do not accept those instants of inspiration

as primary clues to some de facto ‘meaning’?

What if, with regard to the ‘construction’ of meanings,

those epiphanies are viewed as simply one part of a process, a background or conception of an idea—then followed and revised by the production—and then revised again by our encounter with the artwork.

So is it possible then to concentrate upon those

possible meanings constructed within the devices, objects, pictures and sounds that make up the compact world of a space next to Deano’s Barbers on Beechwood Avenue in Creggan, where Locky Morris has constructed an exhibition?

Although the argument presented here may have

reached some kind of fork in the road, the answer again is ‘no’. To look for ‘meanings’ within these devices, objects, pictures and sounds is as wayward a path as looking for ‘meanings’ in the epiphanies. That wayward process of even looking for ‘meanings’ reduces our encounters with artworks to the limited horizons of rationality, the closed worlds of cause and effect—it is always delimiting and reductive, and always the worst path to take. We have to accept our status as relative ‘outsiders’ to the lives of these devices, objects, pictures and sounds—our framework as not one of identification but rather one of estrangement.

What does it mean to even attempt to think about

the ‘lives’ of these devices, objects, pictures and sounds that Locky Morris has constructed? Is it even possible? How can this be any kind of coherent process?

One route could perhaps be identified in some

lines from a recent interview with the film director (and nascent painter) Steven Soderbergh at vulture.com for

New York Magazine, where he said of his approach to painting, “I’m always curious to hear how something was made—though I have no interest in why an artist did something, or what his work means. Like with Jackson Pollock: I’m always interested in what kind of paint and canvas he used, I just don’t want to know what he meant. You’re supposed to expand your mind to fit the art, you’re not supposed to chop the art down to fit your mind.”

What processes or frameworks would ‘chop the art

down to fit your mind’ as Soderbergh warns?

What processes or frameworks can ‘expand the mind’

by Locky Morris which each themselves function like little acts of engagement in some kind of oppositional relationship. These devices, objects, pictures and sounds have been tagged with their points of reference, such as those daily epiphanies with which the artist is identified. They collapse multiple contrary forces into singular objects

and they are little constructed scenarios where the force of non-rational thought engages with the process of considered fabrication.

An example: the image Day of the Rat—the work is

a large print of a photograph of the view chanced upon by the artist through an upstairs window in the artist’s mother’s home, on the day that the artist, his young daughter, his mother, his brother, were all ensconced in the upstairs room while a rat catcher was at work downstairs. The image Day of the Rat is also a psychogeographical case study, which captures the precise laws and specific effects of the urban environment in the emotions and behaviors imposed on the viewer by one single urban view, with multiple emotional and biographical registers of private and public, enclosed and open, concrete and barbed wire prison-like walled structure and a natural, wooded vista. And while these narrative, social and quasi-biographical registers all exist in the work, the work Day of the Rat is also an exemplar of dynamic mark-making, pattern-forming,

and shape-making on a flat picture plane made by multiple levels of colour, form and tone made visible or obscure interacting across various layers of distance from the camera lens.

What else to say?

There is an engagement in work by Locky Morris with

multiple modes of thoughtâ&#x20AC;&#x201D;biographical, conceptual, emotional, physical, visceral, auditory: it is at some considerable and irreducible distance from being exclusively biographical. As part of a core, significant, and very dynamic level of engagement, it is accurate that Locky Morris the artist is at one and the same time both an object and subject of the workâ&#x20AC;&#x201D;an object upon which the work reflects as well as the subject which constructs the work. But rather than this framework delimiting the work or constructing some fixed centre to the work, this interplay of subject and object can bring to mind the seer-like ungrammatical, non-rational, untranslatable statements Je est un autre & On me pense of French poet Rimbaud, (roughly translatable

as “I is an other’ and ‘I am thought / something thinks me’) which remain to some degree unknowable, speculative, unfixed and intangible. And if there is through an encounter with Locky Morris’ work some kind of possible echo of the contradictory elements of Rimbaud’s engagement with the self or the ‘I’, there is equally an encounter with themes from multiple strands of absurdist literature, from Alfred Jarry’s world of Pataphysics, which imagines a science where play, untruth and error have usurped the hegemonic rule of the true, rational and order; from some degree of conflict with the rational in the performativity of the self and the ‘I’ and the ‘other’ in Beckett, for example in Happy Days in which the character Winnie explodes in barely controlled fury “What does it mean? he says—What's it meant to mean?—and so on—lot more stuff like that— usual drivel—Do you hear me? He says—I do, she says, God help me—What do you mean, he says, God help you? … And you, she says, what's the idea of you, she says, what are you meant to mean?”; from Artaud’s incendiary

explosions of the irrational, the performance and fluidity of self, and engagement with the detritus and abject within the everyday—if the artist Locky Morris engages with antacids, chewed fingernails, we are some distance towards Artaud’s incendiary acclamation “Là où ça sent la merde, ça sent l'être” (“There where it smells of shit, it smells of being.”)

There are as yet multiple unexplored paths—and

Locky Morris was born in Derry City, Northern Ireland, where he continues to live and work. He has been exhibiting nationally and internationally since the mid 1980s. Recent solo projects include Me and my Shadow, Mannheimer Kunstverein, Germany; From Day One, Mother's Tankstation, Dublin and This Then, The Golden Thread Gallery, Belfast. Group exhibitions include, The Walls that Divide Us, Apexart in New York City; All Humans Do, the Model, Sligo and White Box Gallery, NYC; What Became Of The People We Used To Be, Tulca Festival of Visual Arts, Galway.

His early work was shown in the British Art Show—

New North and Strongholds at the Tate Gallery, Liverpool, while also exhibiting in a wide range of spaces in his local neighbourhood—such as disused bookmakers, community centres and vacant premises. Forthcoming exhibitions include Dead On, a Void Sites Artists' Garden project in Derry City and Invisible Violence at Artium, Vitoria, The Model, Sligo, and the Museum of Contemporary Art, Belgrade. Declan Sheehan is an independent curator for various projects including Holywell Trust, Arts Council of Ireland Visual Arts Curator Residency 2013, and the City of Culture 2013 projects BT Portrait of a City, Resonance FM @ Void, and Picturing Derry. Locky Morris – A Week in Goals

Locky Morris – A Week in Goals