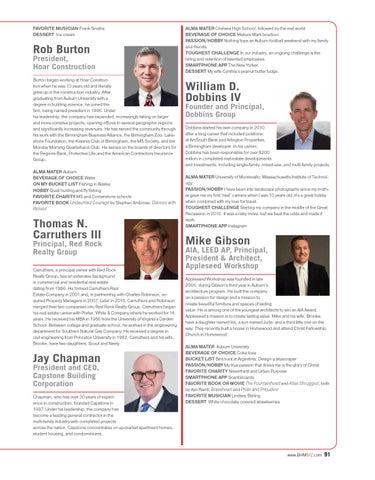 President, Hoar Construction Burton began working at Hoar Construction when he was 13 years old and literally grew up in the construction industry. After graduating from Auburn University with a degree in building science, he joined the firm, being named president in 1996. Under his leadership, the company has expanded, increasingly taking on larger and more complex projects, opening offices in several geographic regions and significantly increasing revenues. He has served the community through his work with the Birmingham Business Alliance, the Birmingham Zoo, Lakeshore Foundation, the Kiwanis Club of Birmingham, the MS Society, and the Monday Morning Quarterback Club. He serves on the boards of directors for the Regions Bank, Protective Life,and the American Contractors Insurance Group. ALMA MATER Auburn BEVERAGE OF CHOICE Water ON MY BUCKET LIST Fishing in Alaska HOBBY Quail hunting and fly fishing FAVORITE CHARITY MS and Cornerstone schools FAVORITE BOOK Undaunted Courage by Stephen Ambrose; Dances with Wolves

Principal, Red Rock Realty Group Carruthers, a principal owner with Red Rock Realty Group, has an extensive background in commercial and residential real estate dating from 1986. He formed Carruthers Real Estate Company in 2001 and, in partnership with Charles Robinson, acquired Property Managers in 2007. Later in 2010, Carruthers and Robinson merged their two companies into Red Rock Realty Group. Carruthers began his real estate career with Porter, White &amp; Company where he worked for 16 years. He received his MBA in 1986 from the University of Virginia’s Darden School. Between college and graduate school, he worked in the engineering department for Southern Natural Gas Company. He received a degree in civil engineering from Princeton University in 1982. Carruthers and his wife, Brooke, have two daughters, Scout and Neely.

Chapman, who has over 30 years of experience in construction, founded Capstone in 1997. Under his leadership, the company has become a leading general contractor in the multi-family industry with completed projects across the nation. Capstone concentrates on up-market apartment homes, student housing, and condominiums.

ALMA MATER Chelsea High School, followed by the real world BEVERAGE OF CHOICE Makers Mark bourbon PASSION/HOBBY Nothing tops an Auburn football weekend with my family and friends. TOUGHEST CHALLENGE In our industry, an ongoing challenge is the hiring and retention of talented employees. SMARTPHONE APP The New Yorker. DESSERT My wife Cynthia’s peanut butter fudge.

Founder and Principal, Dobbins Group Dobbins started his own company in 2010 after a long career that included positions at AmSouth Bank and Arlington Properties, a Birmingham developer. In his career, Dobbins has been responsible for over $200 million in completed real-estate developments and investments, including single-family, mixed-use, and multi-family projects. ALMA MATER University of Montevallo; Massachusetts Institute of Technology PASSION/HOBBY I have been into landscape photography since my mother gave me my first “real” camera when I was 10 years old. It’s a great hobby when combined with my love for travel. TOUGHEST CHALLENGE Starting my company in the middle of the Great Recession in 2010. It was a risky move, but we beat the odds and made it work. SMARTPHONE APP Instagram

AIA, LEED AP, Principal, President &amp; Architect, Appleseed Workshop Appleseed Workshop was founded in late 2005, during Gibson’s third year in Auburn’s architecture program. He built the company on a passion for design and a mission to create beautiful furniture and spaces of lasting value. He is among one of the youngest architects to win an AIA Award. Appleseed’s mission is to create lasting value. Mike and his wife, Brooke, have a daughter named Iris, a son named Jude, and a third little one on the way. They recently built a house in Homewood and attend Christ Fellowship Church in Homewood. ALMA MATER Auburn University BEVERAGE OF CHOICE Coke Icee BUCKET LIST Bird hunt in Argentina; Design a skyscraper PASSION/HOBBY My true passion that drives me is the glory of Christ FAVORITE CHARITY Neverthirst and Urban Purpose SMARTPHONE APP Scanbizcards FAVORITE BOOK OR MOVIE The Fountainhead and Atlas Shrugged, both by Ayn Rand; Braveheart and Pride and Prejudice FAVORITE MUSICIAN Lindsey Stirling DESSERT White chocolate covered strawberries