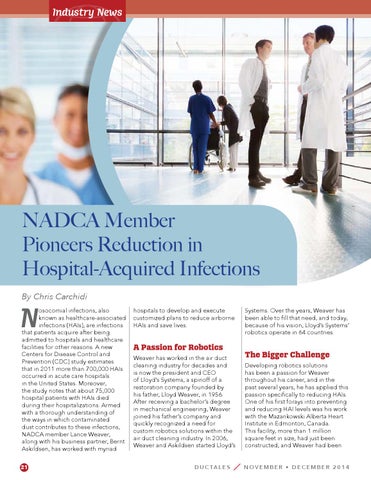 osocomial infections, also known as healthcare-associated infections (HAIs), are infections that patients acquire after being admitted to hospitals and healthcare facilities for other reasons. A new Centers for Disease Control and Prevention (CDC) study estimates that in 2011 more than 700,000 HAIs occurred in acute care hospitals in the United States. Moreover, the study notes that about 75,000 hospital patients with HAIs died during their hospitalizations. Armed with a thorough understanding of the ways in which contaminated dust contributes to these infections, NADCA member Lance Weaver, along with his business partner, Bernt Askildsen, has worked with myriad

hospitals to develop and execute customized plans to reduce airborne HAIs and save lives.

A Passion for Robotics Weaver has worked in the air duct cleaning industry for decades and is now the president and CEO of Lloyd’s Systems, a spinoff of a restoration company founded by his father, Lloyd Weaver, in 1956. After receiving a bachelor’s degree in mechanical engineering, Weaver joined his father’s company and quickly recognized a need for custom robotics solutions within the air duct cleaning industry. In 2006, Weaver and Askildsen started Lloyd’s D U C TA L E S

Systems. Over the years, Weaver has been able to fill that need, and today, because of his vision, Lloyd’s Systems’ robotics operate in 64 countries.

The Bigger Challenge Developing robotics solutions has been a passion for Weaver throughout his career, and in the past several years, he has applied this passion specifically to reducing HAIs. One of his first forays into preventing and reducing HAI levels was his work with the Mazankowski Alberta Heart Institute in Edmonton, Canada. This facility, more than 1 million square feet in size, had just been constructed, and Weaver had been NOVEMBER • DECEMBER 2014