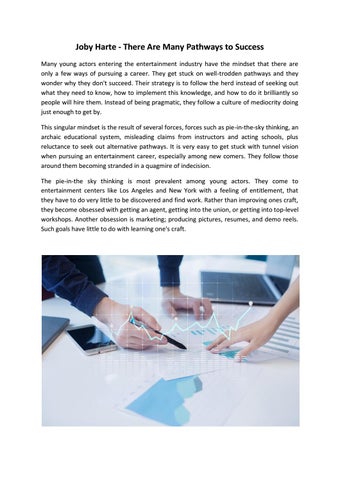 Joby Harte - There Are Many Pathways to Success Many young actors entering the entertainment industry have the mindset that there are only a few ways of pursuing a career. They get stuck on well-trodden pathways and they wonder why they don't succeed. Their strategy is to follow the herd instead of seeking out what they need to know, how to implement this knowledge, and how to do it brilliantly so people will hire them. Instead of being pragmatic, they follow a culture of mediocrity doing just enough to get by. This singular mindset is the result of several forces, forces such as pie-in-the-sky thinking, an archaic educational system, misleading claims from instructors and acting schools, plus reluctance to seek out alternative pathways. It is very easy to get stuck with tunnel vision when pursuing an entertainment career, especially among new comers. They follow those around them becoming stranded in a quagmire of indecision. The pie-in-the sky thinking is most prevalent among young actors. They come to entertainment centers like Los Angeles and New York with a feeling of entitlement, that they have to do very little to be discovered and find work. Rather than improving ones craft, they become obsessed with getting an agent, getting into the union, or getting into top-level workshops. Another obsession is marketing; producing pictures, resumes, and demo reels. Such goals have little to do with learning one's craft.

Others become involved in an archaic educational system that benefits instructors more so than the students. This is especially true in scene workshops, which perpetuate the myth that one learns best by doing. For the beginners and intermediate students such workshops are not very effective learning venues. Why is this? More time and energy are expended in putting up scenes than on learning the fundamental skills of acting. Memorizing a scene, rehearsals, performances and the instructor's critique, they take up valuable time. This time could be better spent on learning and perfecting specific techniques. In such scene workshops, students may receive only snippets of advice, as time restraints do not allow in-depth coaching. Moreover, of those snippets, most apply to that specific scene rather than to acting in general. In addition, students usually become overwhelmed by the many requirements of performing a scene, working on everything and mastering none. Without specific guidelines, the student is confronted with too many decisions, which leads to bad choices or to no choices. Likewise, struggling through a long workshop scene usually perpetuates more faults than fixes. Another caveat is that uncorrected flaws soon become part of the student's skill set, flaws that can seriously impede advancement. Another force affecting pathways is the hype of acting schools, workshops, and instructors. Many of these venues prey on the actor's quest for stardom and hold those carrots dangling just out of reach. Prospective students thus select fame and fortune over craft. When offered platitudes and compliments, the drug of choice, students becomes addicted to stay in these classes. Another dangling carrot is the guru like status of certain instructors. They are the celebrity instructors who are known more for their credits than for their teaching abilities. At universities, weighty curriculums, testimonials and inviting photos are used to entice students to a school where instructors have reach the safety of tenure. As such, these instructors teach the same stuff they were taught leaving student's performances years behind current acting standards. Do you prefer a lengthy curriculum or do you want to learn what makes you a professional actor, one that can sustain a long working career. Having a diploma does not make you an actor, but having the knowledge, the means to implement it and the experience to implement it brilliantly gets you close to professional status. Many new actors are reluctant to seek out alternative pathways to knowledge, create a system that accumulates craft. Some may plead ignorance in not knowing there are other learning venues. When you don't know what you don't know, how could you possibly know? How would you correct that problem? How would you approach finding this elusive knowledge?

You begin by looking at the criteria for a professional actor. What are the things that make them acclaimed and award-winning actors? One of the most prominent attributes is internalization, the ability to relate what's going on within the mind and body. Another is the ability to build credible and compelling characters. When you look at requirements for being a professional actor, these questions lead you to resources, to answers, and finally to competence. What do you need to know? What are the things you must do and do well? When you find areas, you know little about, research them and learn more about them? Great actors are continually reaching out and learning new things.

Still other beginning actors are too lazy to pursue anything outside of their comfort zone. They fall into a set routine that does little to challenge their creative powers. A weekly workshop doesn't cut it. Soon, their careers stall out, as there is no improvement. They continue to do more of the same. This stuck in the mud scenario happens with more and more actors, as they become incapacitated by failures. How can one get out and move on toward success? What are some of the venues and ways to seek knowledge and obtain craft? Look to science to find ways of improving your craft. For instance, the research studies by psychologist Paul Ekman and Robert B Zajonc provide insights into facial expressions and physiological changes in the body. Great information when trying to articulate various emotions. Author and instructor John Sudol expands on this phenomenon in his book

"Acting: Face to face." Research studies on body language can likewise provide enormous information about a character's physical presence. Another important resource is the area of psychiatry, especially when related to personality, temperament types and abnormal behaviors. In drama, almost every character is built upon flaws and abnormalities. Few characters are normal, at least not all the time. You can also gain considerable knowledge by listening to establish professionals. These could be mentors or casual encounters at industry functions. These people have valuable insights and you can connect with them at panel discussions, industry expos, conferences, and film festivals. Take advantage of these opportunities by asking specific questions that show you are eager to learn. Asking intelligent questions is a great networking tool as it fosters mutual respect. There are also specialist and consultants that can help you with things like voice training, accent reduction, and audition preparation. However, these services come at a price. Your fellow actors, your peers, are likewise a great resource for improving your craft. Working with them, rehearsing scenes, or just hanging out, these encounters offer opportunities to exchange ideas and techniques. A great many times these encounters provide new perspectives on the many facets of acting. However, these meetings can easily turn into gripping session where little progress is attained. So stay on target and focus on improving your craft. It's very easy to get so caught in ones own career pursuits that we forget about the people that help and support us. Take a step back and find ways return the favor. It could be a referral to a low-cost photographer, or an offer to proofread their bio. These gestures mean a lot and cost little in time and effort. They also help build lasting relationships and studies show such good deeds make us feel better about our own lives. A sincere note of gratitude is likewise a good gesture. Joby Harte - There Are Many Pathways to Success

Many young actors entering the entertainment industry have the mindset that there are only a few ways of pursuing a career.

Joby Harte - There Are Many Pathways to Success

Many young actors entering the entertainment industry have the mindset that there are only a few ways of pursuing a career.