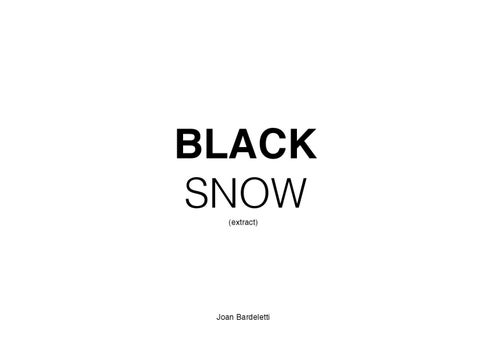 Previous page: «In Montecampione, there was just eating, watch TV and sleep», write Gossou an african refugee from Ivory Coast

Next pages: &gt; African migrants posing in front of the Montecampione slops, as they returned in the ski resort 4 months after having left it &gt; Abdou Sow, coming from Senegal through Libya, is watching skier from the hotel windows. In the background the fences around the football field which was their only occupation when they were there. &gt; Towtow from Mali, is enjoying a coffee offered by the hotel manager at the lobby. Hosting these migrants was a good financial deal for the hotel owner as he received 40€ per day and per migrant from the Italian State during 4 months of the low season. &gt; Migrants leave the hotel to get back in the valley in the appartments where they now live.

Page right: Henry, african refugee from Nigeria, describe his life when he was in Montecampione. Following pages: &gt; Happy, a refugee from Nigeria, is coming back in the appartment he shares with 4 other migrants in Cerveno vilage after italian classe. While his friends finish coocking, he plays with his neighborâ&amp;#x20AC;&amp;#x2122;s dog in the garden enjoying the winter sun. &gt; Ngoumbou Ndaw, Diedhiou Bakari, and Mamadou Lamine Kamby, refugee from Senegal are having an afternoon tea home in Pia Camuno village with Nutella and black coffee after having done work type activity outside in the afternoon. &gt; Henry, Happy and Ibrahim, refugees from Nigeria are trying to understand card play rules in a small bar of Cerveno after having visited the local church.

Page left: Diallo Adama, refugee from Gambia, is getting treated by a dentist at the Hospital of Esine

Page left: Cloths drawings done by Ibrahim, who was a tailor during 10 years in Libya before escaping the country during the war. Life was good there he said and he could make about 1 000â&amp;#x201A;Ź a month without too much effort. He is a very strong activist among the refugees, urging them to take their responsabilities and to ask for their rights.

Page right and following page: Moha Maluba, Kamby Mamadou Lamine, Sow Abdou, Diedhiou Bakari and Ngoumbou Ndaw are five refugees from Senegal. They are not authorized to work while they are waiting for their status to be clarified by the authorities. However, to ease their integration they perform work type activities as during this afternoon, helping a gardening company to clean the park of the local school. Following page: Mustapha, Amadou, Yacouba, Adama and Sekou are all refugees from Gambia, living in an appartment in Piancogno. They follow every afternoon courses in a wood laboratory, learning to create furniture with a female italian teacher.

Page right: «My hope» is a text of Saïdi Manda, a refugee from Gambia, telling his story from Libya to Italy and his dreams for the futur. It was written during an italian class.

Page right: &gt; Happy, Ibrahim,and Lamine, refugees from Nigeria and Mali, are visiting Casa Museo, a museum in Cerveno about the life of the people of the valley during the 1900. Following page: &gt; Happy, Ibrahim and Henry are doing their grocery shopping at the Lidl supermarket in Breno. A person from the K-pax association is following them and pay the items but choosing, preparing the ingredients list, managing a budget is their responsability and an important path into integration as they cross their neigbours with their trolleys doing the same. &gt; Five refugees are talking with the priest of Piacamuno in the parish recreation center. Equiped to play football in the cold, they wait for the local italian team to arrive to start the football game organized by the church. &gt; Ibrahim, a Senegal refugee, on the road down from Montecampione at the precise point where the refugeeâ&amp;#x20AC;&amp;#x2122;s march down to be recorded after 4 months in the ski resort was stopped by the police in October 2011.

Page left: Henry, a Nigerian refugee write how he escaped Libya during the war Following pages: &gt; Happy is giving an english lesson, helped by his friends Ibrahim and Henry seated, to children of the secondary school of Capo di Ponte. &gt; Four catholic african refugees in church in Edolo village during a friday office. The priest helped the K-pax association by giving it a place for the italian lessons to take place and feeding the refugees as they were doing a strike in the bitter cold in front of the prefecture to have clearer information on their status &gt; Eric, Hammadou, Felix, refugees from Cameroon, are hanging out by the Iseo Lake in Pisogne were they live for 4 months now. They crossed the desert, stayed lost 3 days before being rescued, arrived in Libya 2 weeks before the war started and then boarded at 250 on a ship. &gt; Refugees from Ivory Coast following italian class with a retired sceondary school teacher.

Page right: ÂŤMy name and foreanme are Seikou Sanneh. I am 21 years old. I was born in Libya from Gabian parents and I was a student at the university when the war in Libya started. I have no idea where are my parents now. I spoke with my friends there but they tell me they did not see them anymore. I arrived in Italia on the 29th of June 2011; I was in Lampedusa and then I was sent to Mandoria a camp near Torino and finally in Montecampione; but I was not happy because I did not hear my familyâ&amp;#x20AC;&amp;#x2122;s voice since one year now and there was nothing to do up there. I stayed in the sea during 5 days coming from Libya; there was no water and nothing to eat. Now I leave in Cogno village in an appartment. I am a little OK, and a little KO because I always think about my family in LibyaÂť. Following pages: &gt; the road to Montecampione after a snow storm. &gt; Happy, Ibrahim and Henry, 3 Nigerian refugees, are discovering Monte Campione ski resort during a snow storn, 4 months after having left it. It is the first time they actually see snow and they celebrate it.

Page right: The three years trip of Ibrahim from Senegal to Libya and finally MonteCampione.

After shoring in Lampedusa, 100 african emigrants were sent to Montecampione a ski resort at 1 800m high in the italian alps. They now go through an original micro integration process.