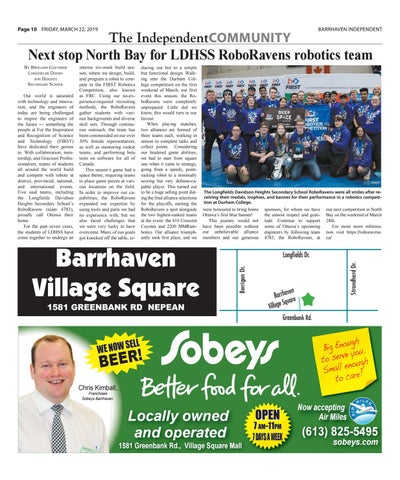 Next stop North Bay for LDHSS RoboRavens robotics team ducing our bot to a simple but functional design. Walking into the Durham College competition on the first weekend of March, our first event this season, the RoboRavens were completely unprepared. Little did we know, this would turn in our favour. When playing matches, two alliances are formed of three teams each, working in unison to complete tasks and collect points. Considering our hindered game abilities, we had to start from square one when it came to strategy, going from a speedy, pointracking robot to a minimally scoring but very defense-capable player. This turned out to be a huge selling point during the final alliance selections for the playoffs, earning the RoboRavens a spot alongside the two highest-ranked teams at the event: the 610 Crescent Coyotes and 2200 MMRambotics. Our alliance triumphantly took first place, and we

The Longfields Davidson Heights Secondary School RoboRavens were all smiles after receiving their medals, trophies, and banner for their performance in a robotics competition at Durham College. were honoured to bring home sponsors, for whom we have our next competition in North Ottawa’s first blue banner! the utmost respect and grati- Bay on the weekend of March This journey would not tude. Continue to support 28th. have been possible without some of Ottawa’s upcoming For more more informaour unbelievable alliance engineers by following team tion visit https://roboravens. members and our generous 4783, the RoboRavens, at ca/

Our world is saturated with technology and innovation, and the engineers of today are being challenged to inspire the engineers of the future — something the people at For the Inspiration and Recognition of Science and Technology (FIRST) have dedicated their genius to. With collaboration, mentorship, and Gracious Professionalism, teams of students all around the world build and compete with robots at district, provincial, national, and international events. Five said teams, including the Longfields Davidson Heights Secondary School’s RoboRavens (team 4783), proudly call Ottawa their home. For the past seven years, the students of LDHSS have come together to undergo an

intense six-week build season, where we design, build, and program a robot to compete in the FIRST Robotics Competition, also known as FRC. Using our no-experience-required recruiting methods, the RoboRavens gather students with various backgrounds and diverse skill sets. Through continuous outreach, the team has been commended on our over 30% female representation, as well as mentoring rookie teams, and performing beta tests on software for all of Canada. This season’s game had a space theme, requiring teams to place game pieces at various locations on the field. In order to improve our capabilities, the RoboRavens expanded our expertise by using tools and parts we had no experience with, but we also faced challenges that we were very lucky to have overcome. Many of our goals got knocked off the table, re-