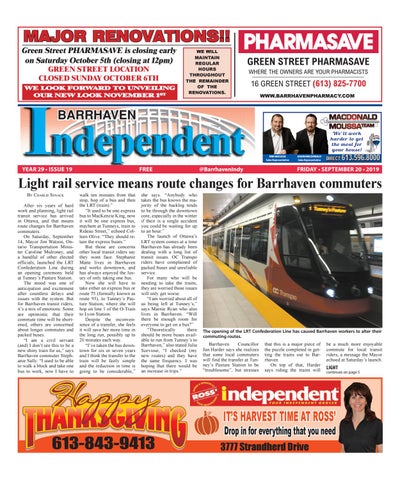 WE lOOk fORWARd tO unVEilinG OuR nEW lOOk nOVEMbER 1St

We Will maintain regular hours throughout the remainder of the renovations.

GREEN STREET PHARMASAVE WHERE THE OWNERS ARE YOUR PHARMACISTS

BARRHAVEN We’ll work harder to get the most for your house! Nim moussa

After six years of hard work and planning, light rail transit service has arrived in Ottawa, and that means route changes for Barrhaven commuters. On Saturday, September 14, Mayor Jim Watson, Ontario Transportation Minister Caroline Mulroney, and a handful of other elected officials, launched the LRT Confederation Line during an opening ceremony held at Tunney’s Pasture Station. The mood was one of anticipation and excitement after countless delays and issues with the system. But for Barrhaven transit riders, it’s a mix of emotions. Some are optimistic that their commute time will be shortened, others are concerned about longer commutes and packed buses. “I am a civil servant (and) I don’t see this to be a new shiny train for us,” says Barrhaven commuter Stephanie Sally. “I used to be able to walk a block and take one bus to work, now I have to

walk ten minutes from that stop, hop of a bus and then the LRT (train).” “It used to be one express bus to MacKenzie King, now it will be one express bus, mayhem at Tunneys, train to Rideau Street,” echoed Colleen Olive. “They should retain the express buses.” But those are concerns other local transit riders say they wont face. Stephanie Matte lives in Barrhaven and works downtown, and has always enjoyed the luxury of only taking one bus. Now she will have to take either an express bus or route 75 (formally known as route 95), to Tunney’s Pasture Station, where she will hop on line 1 of the O-Train to Lyon Station. Despite the inconvenience of a transfer, she feels it will save her more time in the long run, possibly up to 20 minutes each way. “I’ve taken the bus downtown for six or seven years and I think the transfer to the train will be fairly simple and the reduction in time is going to be considerable,”

she says. “Anybody who takes the bus knows the majority of the backlog tends to be through the downtown core, especially in the winter if their is a single accident you could be waiting for up to an hour.” The launch of Ottawa’s LRT system comes at a time Barrhaven has already been dealing with a long list of transit issues. OC Transpo riders have complained of packed buses and unreliable service. For many who will be needing to take the trains, they are worried those issues will only get worse. “I am worried about all of us being left at Tunney’s,” says Marnie Ryan who also lives in Barrhaven. “Will there be enough room for everyone to get on a bus?” “Theoretically there should be more buses available to run from Tunney’s to Barrhaven,” also stated Julia Sceviour, “I checked (my new routes) and they have the same frequency. I was hoping that there would be an increase in trips.”

The opening of the LRT Confederation Line has caused Barrhaven workers to alter their commuting routes. Barrhaven Councillor Jan Harder says she realizes that some local commuters will find the transfer at Tunney’s Pasture Station to be “troublesome”, but stresses

that this is a major piece of the puzzle completed in getting the trains out to Barrhaven. On top of that, Harder says riding the trains will

be a much more enjoyable commute for local transit riders, a message the Mayor echoed at Saturday’s launch.

Drop in for everything that you need