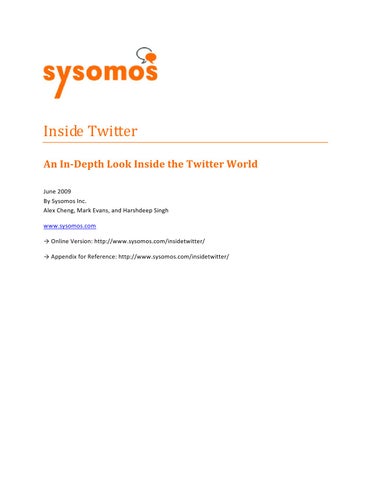 Summary Over the past few months, Twitter has experienced explosive growth, attracting celebrity users such as Oprah, and a growing mountain of media and blog coverage. Sysomos Inc., one of the world’s leading social media analytics companies, conducted an extensive study to document Twitter’s growth and how people are using it. After analyzing information disclosed on 11.5 million Twitters accounts, we discovered that: 72.5% of all users joining during the first five months of 2009. •

New York has the most Twitters users, followed by Los Angeles, Toronto, San Francisco and Boston; while Detroit was the fast-growing city over the first five months of 2009

More than 50% of all updates are published using tools – mobile and Web-based – other than Twitter.com. TweetDeck is the most popular non-Twitter.com tool with 19.7% market share.

Of people who identify themselves as PR professionals, 65.5% have never posted an update

“We wanted to take an extensive snapshot of Twitter that goes far beyond anything done to document Twitter’s growth and demographics,” said Nick Koudas, Sysomos’ co-founder and chief executive. “While Twitter’s growth has been well documented, we wanted to put the spotlight on how people use Twitter, as well as identify many of the key trends in their backgrounds, demographics and activity. Our study, based on the most comprehensive dataset of Twitter users, provides a wealth of information for anyone interested in getting in-depth details about Twitter.”

Twitter’s Hockey Stick-Like Growth in ’09 The Facts: Since the beginning of the year, 72.5% of Twitter users have signed up for the service. This includes 22.7% of total users in March and 19.7% in April. So what accounted for the tremendous growth in March and April? In March, Twitter started to attract significant media attention after Compete.com reported that the number of Twitter users had skyrocketed in February. In April, Twitter’s profile was enhanced when Ashton Krutcher (aka @aplusk) waged a public race against CNN to be the first to have one million followers. Then, on April 17, talk show celebrity Oprah Winfrey (aka @oprah) started using Twitter, making her first Tweet on her show with help from Twitter co-founder Ev Williams. Although April did show impressive growth, it was also the first time in nine months that Twitter had a decline in month-over-month growth.

Twitter Self-Disclosed Age Demographics The Facts: Based on a sample set of users who disclosed their age, 65% of Twitter users are under the age of 25. Note: Only 0.7% of users disclosed their age, with younger users showing a higher probability of doing so. Still, the statistics suggest Twitter is growing in popularity among younger people.

Followers vs. Following Activity Fast Fact: Until people have 150 followers, they follow about the same number of people. After that, this starts to break down. Twitter users who are follow 950 people, for example, are only followed by 531.

How Active Are Twitter Users? The Facts 50.4% of Twitter users havenâ&#x20AC;&#x2122;t updated their status in the last seven days.

Twitter Activity by Day of Week The Facts: Based on a sample of 20 million Tweets, Tuesday is the most popular day for Twitter activity, accounting for 15.7% of total activity; followed by Wednesday (15.6%) and Friday (14.5%)

Twitter Activity by Time of Day The Facts: During the day, the most Twitter activity happens from 11 a.m. to 3 p.m. (EST)

Publishing Tools The Facts: More than half of Twitter users (55%) use something other than Twitter.com. TweetDeck is the most popular non-Twitter.com publishing tool with 19.7% market share, while Twitterfon had 4.5% and Twitterfeed 3.8% share.

iPhone Users on Twitter The Facts: Not surprisingly, the majority of iPhone owners using Twitter are located in the U.S. Note: These numbers are based on the number of iPhone users who use their devices to update their Twitter status. It also reflects higher penetration rates of the iPhone in the U.S.

Within the U.S., iPhone Twitter users are located in:

Twitter Communities We analyzed our entire Twitter collection of 11.5 million users to identify communities. While the notion of a community is admittedly open to multiple interpretations, in our case we adopted the following intuitive definition: we seek to identify sets of Twitter users that are tightly “connected” in terms of following each other. Our results are astonishing:

We will be updating our blog (blog.sysomos.com) with Twitter communities.

Methodology Sysomos analyzed more than 11.5 million Twitter accounts, including the indexing of user profiles and status updates. Location and age information is based on information disclosed in their profile pages (link to the appendix with graphs on how many people disclose location/age/gender). Genders are based on the analysis of userâ&#x20AC;&#x2122;s real names as disclosed against extensive lists of male and female names. Note: this survey report was produced in May and, as a result, data for May 2009 is not complete.

About Sysomos Sysomos is redefining social media analytics by providing corporations, marketers, public relations agencies and advertisers with the intelligence and insight needed to make smarter business and strategic decisions. The Sysomos platform provides instant and unlimited access to all social media conversations to see what's happening, why it's happening, and who's driving the conversations.

Sysomosâ&#x20AC;&#x2122; products include MAP A feature-rich service that offers customers the ability to analyze and understand social media conversations. MAP delivers insight and intelligence about the major conversations, why they're happening and who's driving them. You can make unlimited queries on any topic to get real-time results, collaborate, and generate detailed reports for clients. Heartbeat A cost-effective, real-time monitoring and measurement tool that provides constantly updated snapshots of social media conversations delivered using a variety of user-friendly and intuitive graphics. Heartbeat organizes conversations, manage workflow, facilitate collaboration, and provide ways to engage with key influencers.

Sysomos has collected a comprehensive collection of data from Twitter user profiles and updates. We will be publishing our analysis of this ever-changing and growing data on a regular basis. To leave comments (including the kind of information you would like to see) about this report, visit our blog (blog.sysomos.com). If youâ&#x20AC;&#x2122;re linking to the report on Twitter, please use the hashtag #sysomossurvey.