I found my man in the classified ads 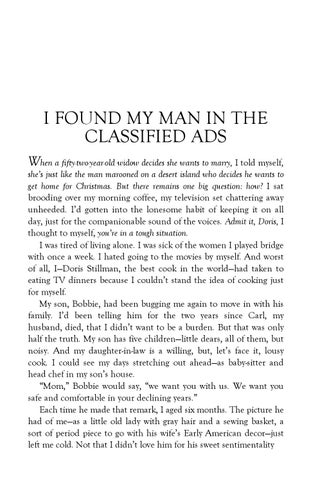 I FOUND MY MAN IN THE CLASSIFIED ADS When a fifty-two-year-old widow decides she wants to marry, I told myself, she’s just like the man marooned on a desert island who decides he wants to get home for Christmas. But there remains one big question: how? I sat brooding over my morning coffee, my television set chattering away unheeded. I’d gotten into the lonesome habit of keeping it on all day, just for the companionable sound of the voices. Admit it, Doris, I thought to myself, you’re in a tough situation. I was tired of living alone. I was sick of the women I played bridge with once a week. I hated going to the movies by myself. And worst of all, I—Doris Stillman, the best cook in the world—had taken to eating TV dinners because I couldn’t stand the idea of cooking just for myself. My son, Bobbie, had been bugging me again to move in with his family. I’d been telling him for the two years since Carl, my husband, died, that I didn’t want to be a burden. But that was only half the truth. My son has five children—little dears, all of them, but noisy. And my daughter-in-law is a willing, but, let’s face it, lousy cook. I could see my days stretching out ahead—as baby-sitter and head chef in my son’s house. “Mom,” Bobbie would say, “we want you with us. We want you safe and comfortable in your declining years.” Each time he made that remark, I aged six months. The picture he had of me—as a little old lady with gray hair and a sewing basket, a sort of period piece to go with his wife’s Early American decor—just left me cold. Not that I didn’t love him for his sweet sentimentality

I found my man in the classified ads