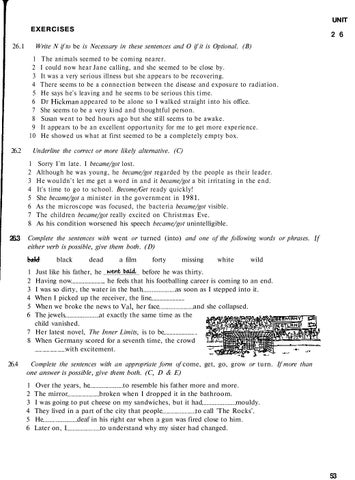 The animals seemed to be coming nearer. I could now hear Jane calling, and she seemed to be close by. It was a very serious illness but she appears to be recovering. There seems to be a connection between the disease and exposure to radiation. He says he's leaving and he seems to be serious this time. Dr Hickman appeared to be alone so I walked straight into his office. She seems to be a very kind and thoughtful person. Susan went to bed hours ago but she still seems to be awake. It appears to be an excellent opportunity for me to get more experience. He showed us what at first seemed to be a completely empty box.

Sorry I'm late. I became/got lost. Although he was young, he became/got regarded by the people as their leader. He wouldn't let me get a word in and it became/got a bit irritating in the end. It's time to go to school. Become/Get ready quickly! She became/got a minister in the government in 1981. As the microscope was focused, the bacteria became/got visible. The children became/got really excited on Christmas Eve. As his condition worsened his speech became/got unintelligible.

Complete the sentences with went or turned (into) and one of the following words or phrases. If either verb is possible, give them both. (D) black

Just like his father, he ...we*ifc..bald,,, before he was thirty. Having now , he feels that his footballing career is coming to an end. I was so dirty, the water in the bath as soon as I stepped into it. When I picked up the receiver, the line When we broke the news to Val, her face and she collapsed. The jewels at exactly the same time as the child vanished. 7 Her latest novel, The Inner Limits, is to be 8 When Germany scored for a seventh time, the crowd with excitement. 26.4

Over the years, he to resemble his father more and more. The mirror broken when I dropped it in the bathroom. I was going to put cheese on my sandwiches, but it had mouldy. They lived in a part of the city that people to call 'The Rocks'. He deaf in his right ear when a gun was fired close to him. Later on, I to understand why my sister had changed.