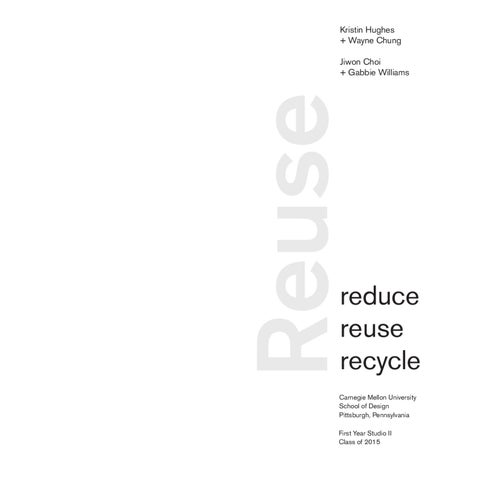 This book is a compilation of spirit animals, all made from recyclable materials; all designed and crafted by firstâ&#x20AC;&#x201C;year students at Carnegie Mellon Universityâ&#x20AC;&#x2122;s School of Design.

Dreaming of a world without contaminated forests

Loneliness was never an obstacle as long as the canary sang. Every day was bright, the sun was always somewhere in the sky, and the air was always filled with music. In her moments of solitude, the canary would watch the world pass, and it calmed her. She was timid and shy when she met anyone new. She was small, delicate, and frightened at times, but usually her fears would subside as time would pass. Her song kept her alive, it kept her going when times were tough and when she was frustrated. Although she was small she could sing loudly for everyone to hear. She sang when she was sad, she sang when she was happy. She always sang because itâ&#x20AC;&#x2122;s what felt natural to her. Her voice was her instrument. It helped her express what she could not say or write, it helped her express the raw feelings in her bones. Not everyone enjoyed her singing, but she did not care nor did she notice. She was a happy creature, a creature that would always

The canary enjoyed flying. It was an escape for her, to feel the breeze in her face and to feel free to go where she wanted. She did not like to be in once place at once, for she always had to be somewhere, to do something, to explore and have adventures, anywhere her wings would take her. She was extremely sociable once she got to know someone, for she enjoyed company and detested neglect. The canary always took pride in the color of her feathers. She was bright and shining like the sun yet delicate like the flowers. She was always inquisitive and investigative yet wary, for the world excited her because it was hers to explore. She was a small creature in a big world, yet the thought never daunted her. The world was hers, and although she was a delicate creature, it was her goal to make it as happy as she could with her song.

Recycling basically involves turning used materials that are labeled as recyclable over to your local waste facility designated in a disposal container as â&#x20AC;&#x153;recyclableâ&#x20AC;? materials to be taken and reused as material for a new purpose. A recyclable product is turned back into a raw form that can be used to create a new and different product. Not only are natural resources limited, but recycling efforts can significantly reduce additional waste that will not only harm the planet today, but future generations as well. The natural resources on our planet earth are limited so we must make the most to conserve, recycle and reuse whenever possible.

After a long, snowy Antarctic winter at her daddy’s feet, Peanut the penguin hatched as a curious and lively little chick. Like all the other Emperor penguin chicks, she was a fearless, but awkward plump ball of feathers. A very little bird with very big dreams, Peanut wasn’t interested in normal penguin games. While most of the other chicks were belly-sliding, iceberg gliding, and glacier diving, this girl just wanted to dance. She was sold the moment she first set eyes on the beautiful swirling and twirling penguin tap dancers at the Annual Northern Lights Show. But when she tried to hop, tap, and waddle on her tiptoes, her little feet would get frost bite. Sad and frustrated, she couldn’t understand how to use her tail and heels for balance yet. In order to cheer up his little princess, Mr. Penguin let her stand on his feet, and together, they danced. Giddy with excitement, Peanut danced on her daddy’s feet whenever she could. She was never happier than when flitting and bopping around with her dad, and her friends noticed. Soon the whole colony caught on--penguin chicks were dancing atop their dad’s feet everywhere.

And Mr. Penguin is not the only one who can dance with Peanut, you can too. No need to practice, youâ&#x20AC;&#x2122;ll find that this peppy little bird is very good at leading.

In the middle of the cool ocean blue, the full pale moon was waiting patiently for the surfacing of mother dolphin and her calf. The stars came out from behind the clouds and exclaimed, “Where are they? Where are they?” But the moon hushed and replied, “Patience. Just keep on burning brightly to help mother and calf find the surface.” Both the moon and the stars waited in the still of the dark night for a break in the surface. But Mother Dolphin was having trouble giving birth to her calf. She was swimming in circles not knowing what to do but knowing that she would never abandon her first calf. Although proud and vain, Mother Dolphin yelled out,”Help!” She knew that without help her baby would need her first breath soon or it would die. She could not do this alone. From all directions, her friends came to her aid. Soon, the calf was born into the cold ocean waters thrashing its flippers about turning and turning, not knowing where to go. He knew how to swim but his lungs were filling up with water and his eyes were filled with fear. “Mom,” he cried out, “I can’t go on my own, I don’t know how..” Mother Dolphin said, “Don’t worry little one, I’ll help you.” And so, Mother Dolphin pushed her baby with her nose up to the surface to greet the moon and stars. The calf took its first breath of air and found the moon and stars smiling upon him. The moon and stars looked below and watched as mother and calf swam side by side off into the distance. Then, luna and stella turned their attention towards another tale on land. A boy was frustrated with his inability to write as he stared helplessly at his book and at his tutor with sweaty palms and tousled hair. “I can’t do this,” the boy cried, “Whatever I write will never be right. “ the girl looked at him with understanding and picked up his pencil and put it back into his hand. “Here, just follow what I do.” Sentence by sentence, line by line, the girl helped her boy rise to see his potential and with words of encouragement and told him to never give up. She was proud to see his smile grow bigger and bigger until he stood up on his feet triumphantly and faced the moon and stars and yelled, “I did it!” He grabbed his homework and circled the room over and over spreading his arms in happiness. The girl promised the boy that she would always give him her guidance and knowledge until he could shoot for the moon on his own. Mother promised her calf to watch him grow under the moonlight until his time came to journey the waters on his own. Both the calf and boy heard these words of promise and hoped that one day, they too could help those in need and remain optimistic. The moon and stars sighed in satisfaction and the stars yawned and stretched its arms. “Come, little ones,” the moon said, “come rest and let daylight take her place.

In the deep rainforest of eastern Indonesia, a young orangutan was born, Oren the orangutan. This orangutan was loved very much by his mother and father. Sadly, though this young Orangutan was full of promise and had a bright future ahead of him, he, like all of us, was not perfect. He was different from his other Orangutan friends and sometimes could not keep up with all of them who would run and jump and play games. Oren had some trouble walking on two feet, though he had no problem walking on all fours. He would crawl along while his other friends would run and jump. Although on land Oren had trouble, up in the trees he truly shined. Oren was always the best swinger and could swing from branch to branch with ease like eating a Fiscus fruit. For Oren’s arms were just as normal and regular as everyone else’s. He would spend all day swinging from branch to branch and he could avoid it, never would come down. “Hurry Up Monkey Boy!” my dad shouted down the hall. I was five years old and I was taking my time crawling out of the bathroom after my bath that night. I, like Oren the Orangutan, cannot walk on two feet and for the first half of my life, crawled around my house. Just like an orangutan. Orangutan’s walk on all fours using their palms instead of their knuckles like the other great apes. I used to crawl just like an orangutan! Orangutan’s and me have a connection that in some ways are shocking. When I was younger, my dad’s nickname for me was “Monkey Boy” as I always liked climbing and exploring things as best as I could. I was also a very silly child. I used to pretend that

I was a monkey climbing up a tree or swinging from a branch. Always wishing to be free and independent. Since I cannot walk, I use my arms for everything. To move, to write, to read, to draw, to dance, to gesture. Everything people use their arms for I use them for as well and even more. Orangutans are known for their exceeding long arms and how they use them to move themselves around and other daily activities. Their arms are their defining feature and mine are my most important to move around and to be independent. As Oren the Orangutan got older, things started to get harder and he could not keep up with his friends like he could when he was younger. One day Oren needed to go away from home like all orangutans did at his age. He had trouble though keeping up with those that were his age. He could no longer even try to run or jump and was starting to have trouble swinging in the trees. He knew that he could not be free the way he wanted and constantly needed to rely on the help of others to get through the day. He would go through the day the best he could and when he needed help he would ask for it. Oren always wished he could be free and this time we would get his chance. Oren moved away from home and greatly enjoyed living away from his mother and father and being on his own. Every once in a while he would go back home and visit and see how his life used to be. Now he still needs help here and there but Oren, through motivation and drive, has become independent enough to live on his own and maybe in the future will have his own family.