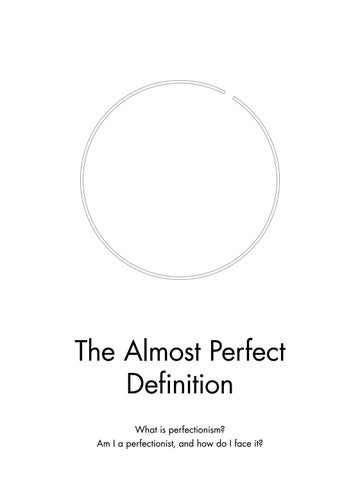 The Almost Perfect Definition What is perfectionism? Am I a perfectionist, and how do I face it?

It is not an easy thing to understand others, even to know ourselves.

This is my interpretation of

The Almost Perfect Definition which is written by Jason A. McGarvey, September 01, 1996.

For Jing Yu and Perfectionists.

“Why does everything have to be so perfect with you?” Most of us set high standards in some part of our lives. Does this mean we’re all perfectionists? Is it abnormal to want the best from ourselves?

A PROBLEM? I like to think that doing your best is something everyone should strive to do. But psychologists and counselors have generally treated perfectionism as a problem: perfectionists, they say, are highly self-critical, and that leads to depression. Blatt (Sidney Blatt, Yale psychiatrist), along with others in his profession, sees as the essence of perfectionism what he calls “self-critical depression.” As he states in his article, he associates “intense perfectionism and severe self-criticism with a vulnerability to severe depression and a serious potential for suicide.” This idea that perfectionism is a problem has skewed attempts to define the concept psychiatrically, according to Robert B. Slaney, a counseling psychologist in Penn State’s College of Education. Definitions have focused on extreme or excessively high standards, treating perfectionism like a disorder rather than as a normal or positive attribute. There are three major dimensions of perfectionism: self-oriented perfectionists, who set high standards and use them to evaluate their own performance; other-oriented perfectionists, who set “unrealistic standards for significant others, place importance on other people being perfect, and stringently evaluate others; and socially-prescribed perfectionists, who believe that others “have unrealistic standards for them, evaluate them stringently, and exert pressure on them to be perfect.” According to Slaney and Johnson, “Hewitt and Flett were quite clear in their belief that all three of these dimensions were pathological.”

A MULTI-DIMENSIONAL THING Is there another dimension to perfectionism? Does a positive side exist? Yes, according to Slaney, who is in the process of clarifying the definition of perfectionism. “I strongly agree with Hewitt and Flett, and Frost and his colleagues, that perfectionism is a multi-dimensional thing,” Slaney explains. “There is a whole range of people who have very different ideas about what perfectionism is. The purpose of this work is to try and find what I think are the unique characteristics of perfectionism that are integral in defining it.”

i. definition “What we found was little in the way of a formal, consensual definition of perfectionism,” says Slaney. “Instead, definitions of the term seemed to be based on the anecdotal data provided in theoretical pieces.” Four characteristics, however, were consistently said to be related to perfectionism: perfectionists had trouble with interpersonal relationships; they had high personal standards and were orderly in their lives; they suffered extreme anxiety because of their inability to achieve their goals; and they tended to procrastinate or not follow through with their work.

I define myself as a perfectionist with problematic experiences. When I set out to do something, I often forget to rest. This causes my brain to burn out, reducing my efficiency and entering a vicious cycle of anxiety.

ii. two major components “As was expected,” says Slaney, “we found that these perfectionists rated high on our Standards and Order scale just as they had in our first study. But the point of interest is that these variables did not differentiate people who thought of their condition as a problem, and people who did not consider their perfectionism problematic. The results of the Standards and Order scale suggested that what had been previously thought—that having high standards was the problematic aspect of perfectionism—was inaccurate.” Slaney and Johnson again found no statistically significant difference on the Interpersonal Relationships scale. With the Anxiety scale, they did find that the group for whom perfectionism was problematic was more anxious. The Procrastination scale, however, did show a difference. Slaney and Johnson suggest, “It may be that when perfectionism is experienced as problematic, procrastination is a problem.” The results of this study suggested to Slaney that two major components of perfectionism exist: First, high standards and orderliness were not necessarily problematic; second, it appeared that anxiety may be the primary factor distinguishing perfectionists who experience their perfectionism as problematic from those who do not.

iii. the core of perfectionism Finally, the researchers asked, What is the core or essence of perfectionism? Most of the participants saw high standards, achievement, and performance as central to perfectionism. According to the study, “several participants, especially men, saw order or control as central, although most combined this with high standards. Women perceived the essence of perfectionism in psychological terms more frequently than did men.” For example, one woman said that at the core of perfectionism was “deep-seated insecurity—fear of failure, inadequacy.” Another said that it was an “attempt to eliminate anxiety through trying to take control of things in the environment we can manipulate.” A participant who seemed more optimistic said that the essence of perfectionism was “To demand what may never be attainable—the satisfaction of attaining the ultimate of one’s ability.” In other interviews, people were very positive about their perfectionism. One woman said, “It works for me. I enjoy challenges.” Another, “What I do, I do well.” A man responded, “Overall, it’s a good attribute. I believe in doing the best I can.” Many others said things like, “It’s fine with me” and “I don’t mind at all.” “Many people we interviewed came to us not knowing whether they were being diagnosed as having a problem, or being congratulated for having high standards,” says Slaney. “We found a whole range of people who were happy with being perfectionists and people who were quite distressed by it. However, none of them were willing to give it up.”

I remember being treated too severely for mistakes as a kid. At that time, Dad even did not realize how difficult is it for a child.

iv. discrepancy factor Searching their interviews for some hint suggesting a common problem, Slaney and Ashby found that many participants in their study associated distress with whether or not they felt that they were achieving their high standards. For example, one participant responded, “(I am) . . . very rarely satisfied with any task. It is never good enough . . . (I) evaluate in a continual way about how well I am doing on any work or even relationiships or measuring myself against people that I feel are really talented or good or that seem happy.” Slaney and Ashby labeled this association the discrepancy factor. As Slaney explains, “What we have arrived at is that there are three basic elements of perfectionism: high standards, orderliness, and discrepancy. We believe that the amount of distress a person feels relates to his or her discrepancy. For example, if a person has high standards and a low discrepancy, if they feel they adequately meet their standards—then they are going to feel, and probably are, productive. If that person is also orderly, then they will most likely be even more productive. On the other hand, if a person has high standards and a high discrepancy, or they consistently feel that they fail to meet their own standards, then that person is going to feel unhappy, distressed, and not very productive. In fact, people who rate high on our discrepancy scale also rate high on scales measuring depression, shame, anxiety, and other negative psychological states.”

I AM FINE What does the search for a multi-dimensional perfectionism mean to the perfectionists of the world? One participant’s response to a question in Slaney and Ashby’s study says it well. When describing why he seemed willing to experience some distress but still chose not to give up his perfectionism, this man said, “Given the choice, I’d rather have it. It’s a drive that pushes me to accomplish close to my ability level. Persons not perfectionistic may be happier, but not accomplish much.” In acknowledging that his perfectionism caused him distress, he said, “It causes some. Nobody’s perfect.”

What I am trying to say is, no matter who you are or what personality you have, please accept and appreciate yourself. Differences between us make the world full of diversity.