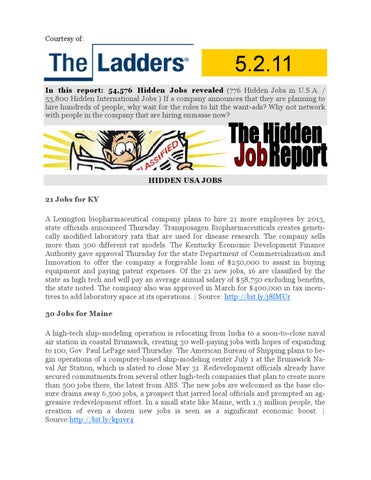 5.2.11 In this report: 54,576 Hidden Jobs revealed (776 Hidden Jobs in U.S.A. / 53,800 Hidden International Jobs ) If a company announces that they are planning to hire hundreds of people, why wait for the roles to hit the want-ads? Why not network with people in the company that are hiring enmasse now?

HIDDEN USA JOBS 21 Jobs for KY A Lexington biopharmaceutical company plans to hire 21 more employees by 2013, state officials announced Thursday. Transposagen Biopharmaceuticals creates genetically modified laboratory rats that are used for disease research. The company sells more than 300 different rat models. The Kentucky Economic Development Finance Authority gave approval Thursday for the state Department of Commercialization and Innovation to offer the company a forgivable loan of $250,000 to assist in buying equipment and paying patent expenses. Of the 21 new jobs, 16 are classified by the state as high tech and will pay an average annual salary of $58,750 excluding benefits, the state noted. The company also was approved in March for $400,000 in tax incentives to add laboratory space at its operations. | Source: http://bit.ly/j8lMUr 30 Jobs for Maine A high-tech ship-modeling operation is relocating from India to a soon-to-close naval air station in coastal Brunswick, creating 30 well-paying jobs with hopes of expanding to 100, Gov. Paul LePage said Thursday. The American Bureau of Shipping plans to begin operations of a computer-based ship-modeling center July 1 at the Brunswick Naval Air Station, which is slated to close May 31. Redevelopment officials already have secured commitments from several other high-tech companies that plan to create more than 500 jobs there, the latest from ABS. The new jobs are welcomed as the base closure drains away 6,500 jobs, a prospect that jarred local officials and prompted an aggressive redevelopment effort. In a small state like Maine, with 1.3 million people, the creation of even a dozen new jobs is seen as a significant economic boost. | Source:http://bit.ly/kp1vr4

100 Jobs for SC A company that produces napkins, table cloths and aprons is opening a new operation in Jonesville, S.C., and bringing 100 jobs to Union County. South Carolina Commerce Department officials said Thursday that the start-up firm Textile Trends is making a $440,000 investment in a cut-and-sew operation. The firm will produce linens for the hospitality industry. Company officials plan to lease a building once used as a packaging site by the Miliken company in Jonesville, located southeast of Spartanburg. Company officials say they will begin hiring in early May. | Source:http://bit.ly/mb9LPv 450 Jobs for Minnesota Minnetonka just got a business boost--Comcast says it's opening a new customer service call center in the city this summer. It means an additional 450 jobs in the Twin Cities metro area, and it's got the governor excited: "What great news for Minnesota," says Minnesota Governor Mark Dayton. "I thank Comcast for its tremendous commitment to our state." Comcast says the new center at 9705 Data Park Drive will be staffed by more than 500 workers. Company officials say they're expecting the call center to have "significant positive economic impact on the entire region." | Source: http://bit.ly/mQ5akJ 175 Jobs for Iowa A Maryland-based company is making plans to employ 175 people at a new iron castings foundry in Iowa City. The plans were to be announced Wednesday at the Iowa Wind Energy Association conference. A news release from the Iowa Department of Economic Development says Nadicom, or North American Ductile Iron Co., of Fulton, Md., will initially focus on the wind turbine market. Nadicom CEO Prasad Karunakaran says the Iowa City site provides a central location that has rail and other logistical services and access to a world-class work force. The company hopes to begin operations by 2013. The $85 million project is subject to state and city review. | Source: http://buswk.co/m5hnYu

HIDDEN INTERNATIONAL JOBS 18,000 Jobs for INDIA IT firm Mahindra Satyam today said it plans to hire about 18,000 people during this fiscal. "We have plans of hiring about 18,000 people this year (FY'12). Over 5,000 are from campuses and the rest are from lateral hiring or recruitment of experienced hands," Mahindra Satyam Head Recruitment and Media Sridhar Maturi told PTI. At the end of the third quarter (October-December period), Mahindra Satyam's headcount stood at 28,832, an increase of 764 personnel from 28,068 employees on September 30, 2010. Maturi further added, "The campus hiring will be predominantly in India and the lateral hiring is from across the world." | Source: http://bit.ly/l0qua5 2,500 Jobs for the UK WHITBREAD will create 2,500 jobs this year as it speeds up its expansion plans. New boss Andy Harrison told Your Money the group will spend about £350million, up from £200m in the past year. The lion’s share will be invested in the group’s budget hotel business Premier Inn, pictured. Harrison, who joined from easyJet last year, wants to grow the chain by half, adding 65,000 rooms over the next five years, 10,000 more than previously planned. Half the new rooms will be in towns where there is no Premier Inn at present, including Bath, Canterbury, St Albans and Windsor. | Source: http://bit.ly/jCBdYz 30 Jobs for Ireland SLIGO-based co-op Connacht Gold is to create 30 jobs in its consumer foods and agribusiness divisions, the company said yesterday. The co-op, which employs around 560 people, said it would take on the staff throughout the rest of this year. The news follows a strong 2010 for the co-op, which saw pre-tax profit nearly treble to €5m from €1.8m a year ago on the back of turnover that topped €300m compared to €264m in 2009. The business returned cash flow of just under €6.7m for the year. | Source:http://bit.ly/jX1A8U

ADV: Why pay for job posts? TheLadders Passport gives you free access to our community of higher-quality professionals. Sign Up Now! http://bit.ly/hjrladders

170 Jobs for Ireland ZAGG International Distribution and CREGG Logistics have officially announced they are creating 170 new jobs at Shannon Free Zone with the support of Shannon Development. Earlier reports stated that the partnership would be generating 140 jobs. Brian S. Packer, MD of ZAGG International, confirmed earlier reports that he expected a total of 300 jobs to be created over the next four years. ZAGG International Distribution, a wholly-owned subsidiary of ZAGG Inc., an American company headquartered in Utah, will create 40 new jobs (over five years) at Shannon Free Zone. The new company will carry out the sales and marketing, product design and administrative activities of the European expansion of ZAGG’s business. | Source: http://bit.ly/iAPqNh 50 Jobs for Ireland Irish parcel giant Nightline has announced plans for a £5m hub expansion after an influx of UK volumes. The carrier has received planning permission to increase its Dublin flagship hub by 40%, creating 50 jobs. The plans come less then a year after Nightline decided to cement its presence in the UK by opening a Lancashire depot and securing a transport deal with Cheshire-based Findel Education. As a result, the firm has experienced volume growth. | Source: http://bit.ly/mEM7zr 33,050 Jobs for India There is good news for those entering the job market and if your choice is financial services, the chances are that you may land a job with a state-run bank. Faced with a staff crunch due to a combination of factors including retirement, state-run banks plan to hire more than 200,000 employees including officers, clerks and sub-staff up to 2013. Leading the pack is the country's largest lender State Bank of India (SBI). SBI plans to hire 33,050 employees. Out of this, 5,400 are vacancies for officers and 25,900 for clerks and the rest for sub-staff. The other banks in the top hiring category include Bank of India, Punjab National Bank, Bank of Baroda and Central Bank of India. | Source: http://bit.ly/kKhVra … Read The Hidden Job Report to discover unadvertised jobs around the world.

Read The Hidden Job Report to discover unadvertised jobs around the world.