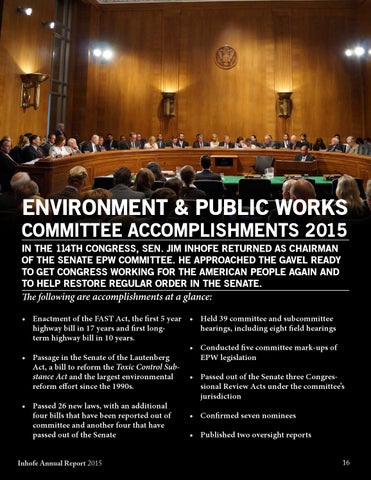 ENVIRONMENT & PUBLIC WORKS COMMITTEE ACCOMPLISHMENTS 2015 IN THE 114TH CONGRESS, SEN. JIM INHOFE RETURNED AS CHAIRMAN OF THE SENATE EPW COMMITTEE. HE APPROACHED THE GAVEL READY TO GET CONGRESS WORKING FOR THE AMERICAN PEOPLE AGAIN AND TO HELP RESTORE REGULAR ORDER IN THE SENATE. The following are accomplishments at a glance: • Enactment of the FAST Act, the first 5 year • Held 39 committee and subcommittee highway bill in 17 years and first longhearings, including eight field hearings term highway bill in 10 years. • Conducted five committee mark-ups of • Passage in the Senate of the Lautenberg EPW legislation Act, a bill to reform the Toxic Control Substance Act and the largest environmental • Passed out of the Senate three Congresreform effort since the 1990s. sional Review Acts under the committee’s jurisdiction • Passed 26 new laws, with an additional four bills that have been reported out of • Confirmed seven nominees committee and another four that have passed out of the Senate • Published two oversight reports Inhofe Annual Report 2015 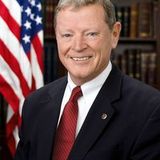