for two sopranos and one alto

About the text The text I have set for this piece is adapted from the second story (‘A LiPle Boy and a LiPle Girl’) of the eponymous fairy tale by Hans Christian Andersen. In this scene of the story, the male protagonist Kay was watching the snow from his window when the Snow Queen appeared beautifully in front of him for the ﬁrst time. My piece, then, musically imagines the charm and allure of that moment. The relevant section of the original text by Andersen is as follows: ‘In the evening, when liPle Kay was at home, and half undressed, he climbed up on the chair by the window, and peeped out of the liPle hole. A few snow-ﬂakes were falling, and one, the largest of all, remained lying on the edge of a ﬂower-pot. The ﬂake of snow grew larger and larger; and at last it was like a young lady, dressed in the ﬁnest white gauze, made of a million liPle ﬂakes like stars. She was so beautiful and delicate, but she was of ice, of dazzling, sparkling ice; yet she lived; her eyes gazed ﬁxedly, like two stars; but there was neither quiet nor repose in them. She nodded towards the window, and beckoned with her hand. The liPle boy was frightened, and jumped down from the chair; it seemed to him as if, at the same moment, a large bird ﬂew past the window.’ This is my abridged adaptation: Snowﬂakes were falling And one, the largest of all, grew larger and larger At last it was like a young lady dressed in a million liPle ﬂakes of dazzling, sparkling ice Her eyes gazed ﬁxedly, like two stars She was so delicate and beautiful

Some remarks concerning the notation 1.

I have decided against using a time signature / ﬁxed bars, for a more ﬂexible and supple approach to the text. As far as possible, I have drawn doPed bar lines to indicate the beginning of phrases / points of ‘synchronisation’. A crotchet pulse is used throughout the piece.

Notes with approximate pitching are indicated using crossed note-heads (e.g. ﬁrst soprano part in ‘bar’ 6). Where technically possible, it is preferable that they are accurately pitched. Otherwise, only the general (falling) melodic contour needs to be observed. 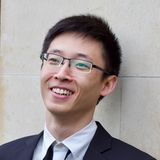