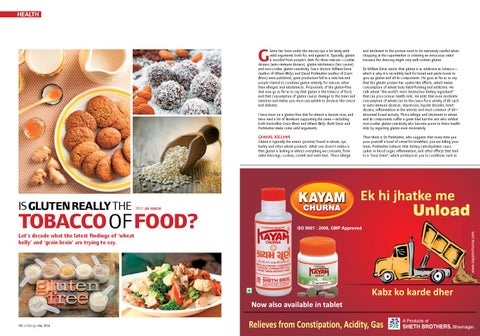 luten has been under the microscope a lot lately with valid arguments both for, and against it. Typically, gluten is avoided from people’s diets for three reasons—coeliac disease (auto-immune disease), gluten intolerance (less severe) and non-coeliac gluten sensitivity. Since doctors William Davis (author of Wheat Belly) and David Perlmutter (author of Grain Brain) were published, grain production fell to a new low and people started to condemn gluten entirely, for reasons other than allergies and intolerances. Proponents of the gluten-free diet now go as far as to say that gluten is the tobacco of food, and that consumption of gluten causes damage to the brain and intestine and makes you more susceptible to diseases like cancer and diabetes. I have been on a gluten-free diet for almost a decade now, and have read a lot of literature supporting the same—including both bestsellers Grain Brain and Wheat Belly. Both Davis and Perlmutter make some valid arguments.

Cereal killers Gluten is typically the amino (protein) found in wheat, rye, barley and other wheat products. What one doesn’t realise is that gluten is lurking in almost everything we consume, from salad dressings, cookies, cereals and nutri-bars. Those allergic

Is gluten really the

tobacco of food? Let’s decode what the latest findings of ‘wheat belly’ and ‘grain brain’ are trying to say.

and intolerant to the protein need to be extremely careful when shopping in the supermarket or ordering an innocuous salad because the dressing might very well contain gluten. Dr William Davis insists that gluten is as addictive as tobacco— which is why it is incredibly hard for bread and pasta lovers to give up gluten and all its components. He goes as far as to say that the gliadin protein has opiate-like effects, which makes consumption of wheat truly habit-forming and addictive. He calls wheat “the world’s most destructive dietary ingredient” that can pose serious health risks. He adds that even moderate consumption of wheat can be the cause for a variety of ills such as auto-immune diseases, depression, bipolar disorder, heart disease, inflammation in the arteries and most common of all— abnormal bowel activity. Those allergic and intolerant to wheat and its components suffer a great deal but the rest who exhibit non-coeliac gluten sensitivity also become prone to these health risks by ingesting gluten even moderately. Then there is Dr Perlmutter, who suggests that every time you pour yourself a bowl of cereal for breakfast, you are killing your brain. Perlmutter believes that dietary carbohydrates cause spikes in blood sugar, inflammation, and other effects that lead to a “toxic brain”, which predisposes you to conditions such as

Alzheimer’s, Parkinson’s, depression, amongst other serious chronic diseases. Like Dr Davis, he vehemently opposes the whole grains movement and believes that they do more bad than good. Foods high on the Glycemic Index and those that contain gluten should be avoided, including foods that have long been touted as healthy forms of carbs such as wheat, rye, bulgur, barley and oats. In essence, Perlmutter’s prescription for a brain-friendly diet could also be described as a variation of the gluten-free diet, the Paleo diet or the Atkins diet. Dr Perlmutter’s belief that grains are not good for the body echo what other nutritionists have been saying, which is that our body’s evolutionary clock is set 10,000 years ago, when we didn’t have grains in our diet.

Sugar is the enemy, not fat Eating a diet completely devoid of gluten and sugar is extremely hard and inconvenient for a lot of us, considering our celebrations at work, home and in restaurants have meals that entirely consist of flour and sugar. What a lot of us haven’t quite understood yet is that bread, wheat, rye, barley and other grains actually convert to sugar in the blood stream, so avoiding table sugar in our daily diets is not enough. What can one eat then, you might ask? Well, both doctors allow lean meat, fish, low GI fruits and berries, leafy greens, nuts and adequate amounts of fat and oil (yes you heard that right). Unlike other doctors, both Perlmutter and Davis believe that we should shift our focus from shunning fat altogether to identifying wheat and its components

Quick notes • Giving up wheat can be pretty daunting at first, but if you make healthier substitutions like quinoa, amaranth and teff, you should be on the right track. • Eat more fat. Increase your consumption of healthful fats like extra virgin olive oil, avocado, grass-fed beef, wild fish, coconut oil, nuts and seeds. Remember the “less is more” rule applies here but you have got to consume the right stuff. • Get at least 20 minutes of aerobic exercise each day. Play a sport at least once a week. • Add a nutritional supplement providing approximately 1,000 mg of the omega-3 DHA to your daily supplements. as agents of disease. Perlmutter believes in the Paleo diet—a high-fat, low-carb, adequate diet which is best for the body and brain to function optimally. He adds that even though with the advent of agriculture and food processing, our diets have evolved, our stomachs haven’t (they are still conditioned to work best with Paleo diets). In conclusion, avoiding gluten has several health benefits for those who are intolerant to it as well as those who need to avoid it as per the doctor’s orders. Neurophysicians and doctors are now prescribing the no-gluten diet to all and sundry. That being said, it is imperative to listen to your body carefully and go with the approach that works best for you rather than following something that may not work for your body. Also highly recommended is that one must consider working closely with a dietician and a physician before embarking on a diet plan. Lastly, in order to stay in good health and build a lean, mean fat-burning machine, one should cut the refined carbs, slowly increase consumption of healthy fats and exercise regularly. Good luck! 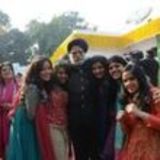