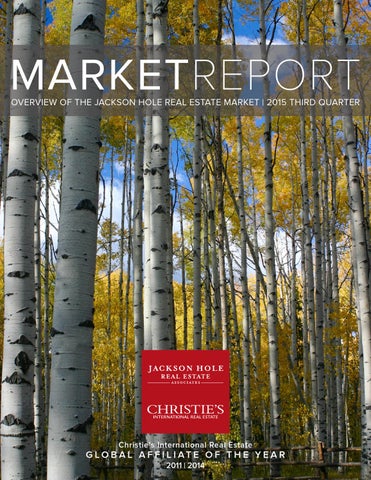 increase in sales over $5M

INTRODUCTION On behalf of our team of dedicated professionals at Jackson Hole Real Estate Associates, we are pleased to present the 2015 third quarter comprehensive market report for the Jackson Hole area. The summer season is winding down in Jackson Hole, but the real estate market is still in full force. The third quarter of this year brought forth a continuation of the momentum experienced throughout the first half of the year, with increased transactions, rising prices and decreasing inventory.

Overall Market Every segment of the market showed continued growth when compared to this time last year. The overall market experienced a 17% increase in the number of transactions, and the total dollar volume increased approximately 30%. A shift in the price range of transactions was a continued trend through the third quarter. There were 15% fewer transactions under $500,000 and 110% more transactions over $5 million. This trend in the over $5 million segment was evident when considering the increased median sale price, up 15%. The summer season brought reprieve to the inventory drought in some segments of the market, however, the overall supply of inventory decreased by approximately 8% when compared to this time in 2014. The market appears to be positioned for continued growth through the remainder of the year with approximately 80 properties under contract at the end of the third quarter.

Vacant Land Segment The vacant land segment of the market continued to show gains due to the inventory shortage in single family homes. The number of transactions increased dramatically (a 37% increase) when compared to the end of the third quarter of 2014. Even more dramatic was the approximate 60% increase in median sale price and 40% increase in total dollar volume. This was primarily the result of a shift in the price range where buyers purchased vacant land. The market share in the $1 million - $2 million range was slightly less than the under $500,000 range, 23% and 29% respectively. Vacant land transactions over $2 million represented nearly 30% of total vacant land transactions. Teton Village experienced the majority of land sales spurred by the popularity of the Shooting Star development. As the vacant land segment of the market continues to grow, inventory continues to diminish; down approximately 15% when compared to this time in 2014.

SALES DISTRIBUTION BY PRICE Over $5M 3%

LUXURY MARKET SPOTLIGHT The luxury segment of the market continued momentum through the third quarter of this year with a nearly 30% increase in the number of luxury transactions. Most notably was the increase in transactions over $7 million, which doubled when compared to this time last year. The luxury segment of the market experienced 9% of the total transactions through the third quarter of 2015. Record Sale (2015 3Q):

Number of Sales Above $3M:

*listing price **not including land sales

GLOBAL LUXURY REAL ESTATE AT A GLANCE A Return to Normalcy for Most of the World’s Top Property Markets As observed in last year’s Luxury Defined report, the world’s top cities experienced an explosion in luxury home sales during 2013, fueled by pent-up demand, increasing consumer confidence, and robust stock market returns. In 2014 however, prime property sales in these markets settled into a stable growth pattern that seems tepid compared to the year prior. (See Exhibit below). San Francisco, which startled the world with an astronomical 62% increase in $1 million-plus home sales in 2013 compared to 2012, had strong, though less explosive, annual growth of 19% in 2014. “Coming after an exceptional year of strong sales and price appreciation that ranked among the highest in the US, the growth slowdown was predictable, but the positive economic fundamentals of the San Francisco market remain unmatched,” notes Mark McLaughlin of Pacific Union International. In Miami, the sales pace slowed from 27% growth in 2013 to 9% in 2014. “The single-digit increases of 2014, in contrast to the double-digit increases of 2012 and 2013, reflect a return to more normal market conditions,” says Ron Shuffield of EWM Realty International, whose firm sells a $1 million-plus home in Miami every 17 hours. Across the Christie’s International Real Estate Affiliate network, brokerages reported real estate sales of more than $300 million per day in 2014 ($13 million every hour). Contact us for the full report from the 2015 Global Luxury Real Estate White Paper or visit jhrea.com/ market-reports. Jackson Hole Real Estate Associates exclusively owns and maintains the valley’s oldest and most comprehensive database. The Jackson Hole Real Estate Associates’ Market Report, unlike others in the valley, is derived from the JHREA proprietary, forty year old database (not just mls data) as well as decades of history and success, making this the most trusted and accurate real estate report in the region. No other real estate company or agent has the resources available to offer this depth of expertise or insight regarding current or previous market conditions. The unmatched resources and knowledge of Jackson Hole Real Estate Associates, the largest and most dynamic real estate company in the region, combined with the largest luxury real estate affiliation, Christie’s International Real Estate, offer the ideal balance of local expertise and global reach. * The statistics used in this report are from the Teton Multiple Listing Service (MLS) and JHREA’s internal database. * This report does not go into detail on every segment of the market, but is intended to offer an overview of general market conditions. Statistics are cumulative. * All statistics are supplied by sources that have been deemed reliable but are not guaranteed. 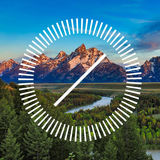