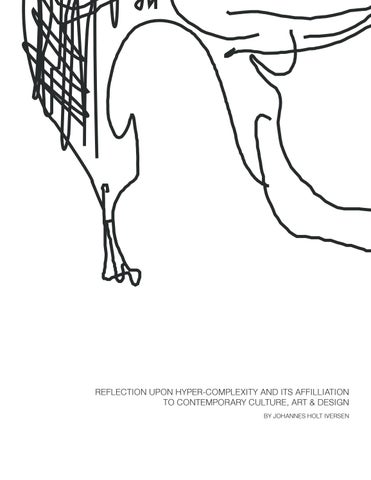 REFLECTION UPON HYPER-COMPLEXITY AND ITS AFFILLIATION TO CONTEMPORARY CULTURE, ART & DESIGN BY JOHANNES HOLT IVERSEN

Reflection upon Hyper-complexity and its affilliation to Contemporary Culture, Art & Design By Johannes Holt Iversen

November 2016 – December 2016 1.1 Abstract Hyper-complexity is a term coined in many various disciplines during the last decade. This essay reflects upon the scientific, philosophical and artistic understanding of the term. In this essay multiple social scientific understandings, cultural and artistic notions will be held in conjunction to each other. Ultimately leading towards argumenting why hyper-complexity also influences and becomes contemporary culture. In order to comprehend the vast majorities of schools, only a fraction is mentioned in the following essay. By taking the viewpoint from an artistic practice and art theoretical frame, this essay aims to discuss multiple aspects of contemporary complexities and its affiliation to society, within the creative arts as well as in our use of technology in everyday life. Keywords Hyper-complexity Philosophy Art Theory 1. 2 Introduction In 1986 the German philosopher and theorist Ulrich Beck wrote the book “risikogesellschaft” (risk society). In which he proclaims that the way a modern society organizes in reponse to a certain risk has multible complexities and consequences on various other areas within same society. (Beck, 1992) Both Ulrich Beck and also the sociologist Anthony Giddens links the societal behavior of modern life to the term “modernity”, coined in this reflection as the late modernity when speaking of the 20th century. However in reflecting upon early 21st century and the contemporary ages we live in now, the use of the modernity has been suggested to be “liquid modernity” or even “post-modernity”. (Bauman, 1989) (Giddens, 1990) This has furthermore been related to, in modern science as the realism in science, a term introduced in sociological and social scientific circles right after the environmental nuclear disasters of the mid-late 1980s such as the Chernobyl accident in Russia and the Three Mile Island accident in USA. (Beck, 1992) Unfortunately these pre-revelations does not compete with the constant altering times we are living in today, dealing with an automated digitalized and computerized multiverse, developing a relentless stream of complex decisionmaking, ultimately leading to complex existential consequences. Because who has the existential responsibility if a computer chooses, in a human perspective, a wrong dicision based on a dehumanized automated mainframe1. Therefore when talking about the societal modernity coming after the late-modernity in the means of contemporary culture, hyper-complexity can be the presumable term of use today. The term was conceived by theorist John Urry in his book “Handbook of Research on Technologies and Cultural Heritage” from 2010 and is quite adaptible into contemporary cultural philosophy. Contemporary art has moved from the variegated terms of hyper realism, conceptual art and minimalism, into the era of hyper-complexity. A complexity that was born out of an ultimately democratized access to the creative arts in relation to the Internet and the overall social connectivity (social media, e-commerce and interactive media), but also made gatekeeping2 cultural institutions such as the museums, galleries and collections forced into becoming interactive and dealing with their societal status more than ever before. The cultural social rules of good and bad art has come to an end, the cultural elite changed 1 Mainframe; high-capacity computers especially in governed and corporate networks runs on a computer mainframe to deal with the high capacity of data input and output, also known as data transactions. 2 Gatekeeping; an aggregating system which ultimately filters a given societal, economic or cultural system. Can also be seen in editorial departments of news stations, magazines or radio stations.

from being the economic top of society through progressive societal evolvement, the few enlightened awared is now spread out to a global creative sphere. The cultural institutions is by that changed. Their demography is in a constant limbo between the old and the new era of contemporary human culture. Due to the anti-cultures of ignorant art, anti-digital movements and the return of the arts and crafts movement in the form of the diy3 movements, it has been widely accepted that traditional media such as painting, photography and sculpture are becoming just as usable again on the contemporary art scene through performance, as the art installation and mixed media has been for the last couple of decades. It proves further the notion of hypercomplexity as the new era of contemporary art thinking, since the main understanding of hypercomplexity roots in the acceptance of no specific socially accepted order or cultural institutional capital. Hence to the nature of complexity and multi-faceted global culture that sprung out of modern art and the late societal modernity. Living in the hypercomplex era of time is accepting that each individual artist has their own social and culturally defined rules, in which the artist always needs to constantly challenge themselves and their environment upon the current status quo. What forced me into writing this essay in the first place, was the counter-culture to hypercomplexity that has its roots in protectionism4, which is widely seen re-appearing on the political and economic scene as well as on a societal level of today, in the form of anti-globalization movements. The importance of a free global art scene with a multi-faceted complexity is more important than ever before, the liberation of the fine arts during the late 20th century has come to a crossroad, either we discard the past decades of evolvement or we continue exploring this complexity which eventually would evolve into this hypercomplexity this paper suggests. Protectionism on the cultural scene can be seen as the driven tool for cooling down progress by making pure experimentation to not happen, unless it is effectively processed through iterative design models which prevent unexpected costs in a capitalized societal model. By this LEAN5-based methodological approach highly inspired by corporate design, such as the double diamond model and design thinking (Buxton, 2007), we will eventually end up in a state where the creative arts becomes incapable of making and purely just producing, reproducing an old narrative. 1.3 Argumentation Lars Qvortrup (2003) deals with hyper-complexity in his book â&#x20AC;&#x153;The hypercomplex Societyâ&#x20AC;? as a societal matter already happening, also in reference with Becks (1992) theories of a risk society, Qvortrup (2003) adds to the notion that neither are we in a postindustrial or postmodern society, but now in the age of hypercomplexity. Here digitalization has become the catalyst, in this reflection upon hyper-complexity the societal matter is only analyzed lightly and comparative to a theoretic framework within the understanding of the creative arts. An example of complex thoughts that trancends from late modern art (late modernity) into contemporary art, 20th century abstract painters refers in most of their written work, that within every given spontaneous structure, autonomous or not, there will be clues. (Jorn, 1969) Taking this statement from Jorn into a contemporary framework seems perhaps grotesque. But what is to be 3 Diy; Do-It-Yourself 4 Protectionism; an eonomic-based theory associated with the late mercantilism seen in the year 1816. Today protectionism can be associated with the anti-globalization movements happening worldwide. 5 LEAN Thinking; a business methodological approach that provides a new way of thinking how to organize human activities. Ultimately driven to provide more benefits to society and value to the individuals while eliminating waste. LEAN is based on the Toyota Production System which was used on factory efficiency.

destinguished in Asger Jorns understanding of complex structures, is the relation between his general notion that everything becomes relevant and stating that everything becomes meaningful. That question lies in the realm of three spheres which interacts with each other; the visuality, the materiality and the individual subjectivity. This complexity overshadows the concept of clues and branch out into everything that makes us reflect upon human existence. The contemporary culture is today interconnected and basically leaning towards a fluid structure, that conceives hyper-complex decissions. Landscape and subject are one, visuality has been democratized, spontaneous abstraction is no longer enough in itself. All is dynamic. All is minimal and monumental at the same time. All is pretty and ugly and all is pure in its conception. This complexity is what gives birth to the art of the 21st century taking its initiating steps in modernism. But the hyper-complexity will ultimately lead to subjective simplicity, in the same sense that any visual composition must contain a certain balance. However this subjectivity may also result in highly risk of individualization of the being. Ultimately leading to other costs (artistically or humanly), that would lead us back to hyper-complexity. The interaction between the complex and the simple understanding of the world can be seen in multiple scientific and philosophic cases, whereas navigating in this cosmos always will lead the limited human understanding of high complexity, to stay onboard as a simple navigator. The artistic (or scientific) instinct is what drives us into exploration. This leads to the important fact that hyper-complexity and relativity undeniably belongs together, the impact row of a given action, artistic or not, will ultimately lead to a kinetic, chemical or time based reaction. No matter how you see it, space and the interaction with space is what creates hypercomplexity. And dualism between simplicity and complexity is what creates the dualism which almost all contemporary culture affilliates itself with today. Every design, artistic action or performance is based on a divergent and convergent process within the empiric realm of experimentation. 1.4 Conclusions Complexity has always been one of the major concerns in modern life, in a contemporary context what once was a complex situation, now becomes a hyper-complex situation. What once was a realists point of view has now turned through surrealism as a catalyst, into hyper-realism. Everything evolves into larger complex patterns, making things less accessible or perhaps harder to grasp at once. Qvortrup (2003) even collects it on a societal level, claiming that the presence of the Internet is the most outspoken phenomenon proving the existence of Hyper-complexity on a larger societal scale. (Qvortrup, 2003: p. 10) Furthermore in the digital industry it is mentioned that the big wave of â&#x20AC;&#x153;smartâ&#x20AC;? products, additions, wearables and installments in our homes, will need a set of complexity-management mechanisms (units.muohio.edu, 2016). This because the human brain will not be able to digest such a vast boosted overload of informations and almost endless autonomous set of choices. So in what way can we ethically take this automation into consideration? Is it even possible for our limited natural brain of evolution, to have the capacity to even know which computerized automation that provides us with the right information? In this very moment our digital traffic and whereabouts on digital social media are controlled by algorithms, which to a certain extent limits the human understanding. When listening to a certain type of music you are immidiately suggested music in the same genre, when buying commodities online you are getting similar suggestions. This attempt of creating subjective simplicity is not sufficient, on a social scale it can even be devastating. We become narrow minded to such an extent that we will not be able to build upon certain enlightening curcumstances such as digital aesthetics. How can you be sure that you are being truly enlightened in a technologic time where subjectiveness now is being reproduced to you in a singular algorithmic understanding. The matter of choice ultimately lies within the matter of human complex curiosity whereas hyper-complexity is the outcome yet also the biggest challenge of contemporary culture and society.

This publication is a digital release by HOLT-IVERSEN.com All rights reserved Â©2016 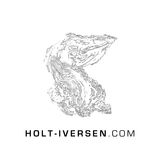 Reflection Upon Hyper-Complexity And Its Affiliation To Contemporary Culture, Art & Design

Hyper-complexity is a term coined in many various disciplines during the last decade. This essay reflects upon the scientific, philosophical...

Reflection Upon Hyper-Complexity And Its Affiliation To Contemporary Culture, Art & Design

Hyper-complexity is a term coined in many various disciplines during the last decade. This essay reflects upon the scientific, philosophical...